The Cambodia DailyAll the news without fear or favor
Home The Cycle of Rice: Rice for the Spirits

The Cycle of Rice: Rice for the Spirits 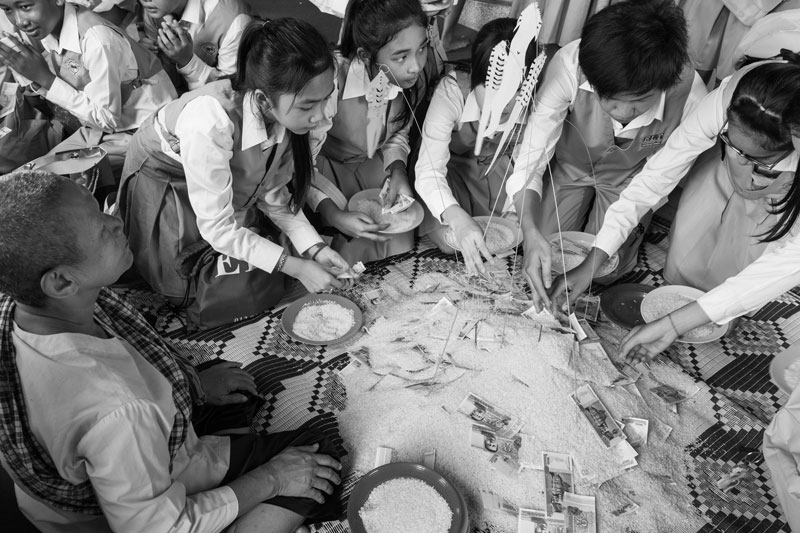 During the Buddhist festival of Pchum Ben, Cambodians offer rice and other food to monks to be channeled to the spirits of their ancestors. This is the third in a 12-part series on Cambodia’s annual rice cycle, to be published monthly.

While Surrounded by fellow worshipers on the penultimate day of the Pchum Ben festival, Chuob Zeurdy said she had come to Wat Sampeau Meas near Phnom Penh’s Olympic Stadium to care for her deceased ancestors.

Behind her, two lines of worshipers carrying small dishes of cooked rice moved past a table lined with two rows of silver alms bowls.

Into each bowl, they placed one spoonful of rice — leaving a small donation of a few hundred riel on a plate behind each bowl. At the end of the table, the remaining rice left in the pagoda-goers dishes was scooped by hand into a larger bowl.

“We put the cooked rice [in the bowls] to pass merit to those who have died so that they can finish their suffering quickly and so be fine,” said Ms. Zeurdy, 57, adding that Wat Sampeau Meas was the fifth pagoda she had visited during the 15 days of Pchum Ben.

“We have to do this because it is our tradition, passed down by our ancestors,” she said.

Taking in the proceedings from behind the table with a group of similarly white-haired men, ceremony assistant Sou Am, 82, said the tradition had a quite literal name: “dak bat,” or “putting rice in the monk’s bowl.”

“If they don’t give the cooked rice to the monks — who are those who have done good deeds — the food would not be delivered to the dead,” Mr. Am said, adding that he had been helping with the ceremony for three decades.

He said that the rice scooped by hand into the large bowl at the end of the table was destined for those whose lives had been marked by evil — and had therefore become animals or “hungry ghosts” after death.

“The cooked rice placed with the hand is for those who are dead and became hungry ghosts because they did not do good deeds when they were alive,” Mr. Am said to the nods of his companions.

“Such dead people cannot eat cooked rice and food properly by using a spoon, but they can eat rice improperly by not using a spoon or eat cooked rice thrown on the land,” he added, referring to the practice of throwing balls of rice, or “ben,” onto the ground outside a pagoda’s main temple before dawn during the first 14 days of Pchum Ben to feed the famished spirits.

Rice, and the culture surrounding it, play a central role in Cambodian religious traditions, according to Erik Davis, a scholar of Cambodian Buddhism at Macalester College in Minnesota.

“Keeping in mind the ways that rice often metonymically stands in for food in general, all offerings of food to monks are often imagined as the giving of ‘rice,’” he said in an email.

Mr. Davis said that offerings of rice were rooted in Cambodia’s history, noting that prior to the introduction of state-sponsored currency, “most rice culture peasants” paid taxes and offered support to their pagodas through offerings of the grain.

He said that because it was against the Vinaya — or monastic rules — for monks to take part in plow agriculture, the “production and offering of food by the laity to monks who explicitly cannot raise paddy rice, and whose reception converts these offerings into merit, forms the basis of the lay-monastic relationship.”

“Giving rice to monks…is the means by which merit is made and can be donated to the Hungry Ghosts, thereby transforming the ghost’s suffering into a better state, and resulting in blessings from this ghostly ancestor to their living descendants,” he said.

Chhoeung Bunchhea, a Buddhist monk and member of the Supreme Sangha Judicial Council of the Mohanikaya sect, said that because rice played an important role in the everyday lives of Cambodians, it was natural that it would also play a similar role in the country’s religious life.

“Rice is very important because you know the people eat rice every day — in the morning, [at] noon, in the evening. Three times a day, they eat meals made from rice,” he said.