The Cambodia DailyAll the news without fear or favor
Home News The Cycle of Rice: Crossing the Continents 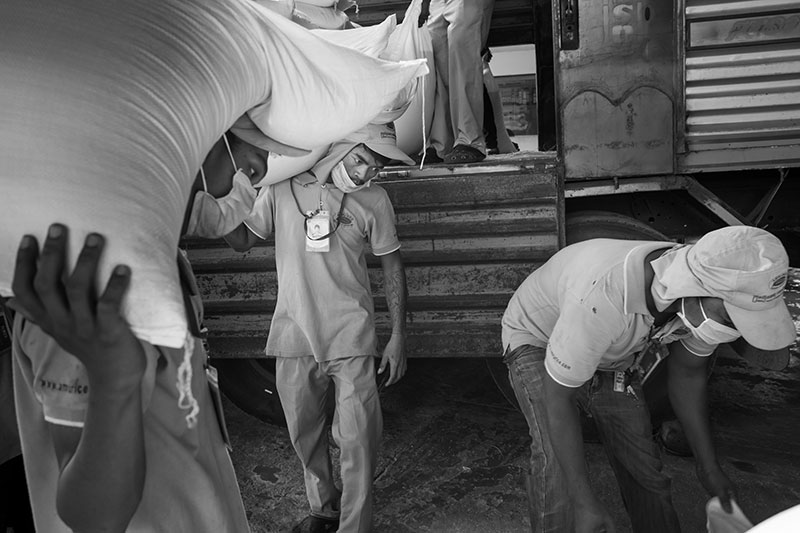 Watching as a team of sweat-soaked workers loaded 50-kg bags of long-grained Cambodian white rice onto a waiting container truck, They Honrith explained that the shipment was only at the beginning of a journey that would take it across two continents.

“This order is heading to Klaipeda, Lithuania,” Mr. Honrith, a logistics manager at local rice exporter Amru Rice, said after checking the day’s manifest at his firm’s 8,000-square-meter factory and warehouse on the outskirts of Phnom Penh.

“The truck will take it to the port in Sihanoukville and then it will be sent by sea to Europe.”

A few meters away, the six-person crew labored to stay on schedule as they loaded up the 150-ton order, worth more than $60,000.

A quick glance at an order form attached to Mr. Hongrith’s manifest showed that the shipment was scheduled to arrive at the Baltic Sea port on January 12 — about five weeks after it departed the Amru warehouse.

On the warehouse floor, two members of the crew worked to heave the weighty sacks onto a wheeled conveyor belt leading to the truck’s open trailer, where they were received by the four others, who took turns hoisting the bags onto their shoulders before quickly unloading them and getting back in line.

Nearby, a supervisor carefully counted as each bag as it made its way onto the truck, keeping tally on a piece of cardboard affixed to the trailer’s door to ensure that a total of 500 bags made it on board.

“Each container truck can be loaded with 25 tons, so we will send it to Sihanoukville in six loads,” Mr. Honrith said, before returning to a stack of paperwork on his desk.

Amru CEO Song Saran said his firm was one of about 70 or 80 operating in the country’s increasingly competitive, but still nascent rice export sector.

“We have been incorporated as an exporter since 2009. Before that, we were a local rice distributor,” Mr. Saran said.

Opened in 2012, the company’s $8 million Phnom Penh factory is now able to process about 60,000 tons of rice per year, 80 percent of which ends up on plates in Europe, he said.

“In Western Europe, France, Germany, Holland, Italy, the U.K. and Belgium are our top importing countries. In Eastern Europe, it is Poland, the Czech Republic, Bulgaria, Hungary, Russia and Belarus,” he said.

In 2010, the government set a lofty goal of exporting 1 million tons of processed rice annually by 2015. Last week, however, Prime Minister Hun Sen conceded that this target was out of reach, saying the country would likely only send about 500,000 tons overseas.

Still, milled rice exports have grown each year since the goal was set. In 2014, exports reached 387,061 tons.

Mr. Saran attributed the growth to a combination of investment from Cambodian commercial banks, private investors and the government, which has provided loans with favorable terms to millers through its Rural Development Bank.

He said that before the million-ton target could be met, a number of steps needed to be taken, including opening new markets for Cambodian rice, particularly those outside of Amru’s European focus.

“We need to find markets like Indonesia and the Philippines, because they are also big rice importers.”

Back at the Amru plant in Prek Pnov district, production manager Mol Mok said his focus was on ensuring that the company was able to send quality rice abroad.

Mr. Mok explained that the semi-milled rice delivered daily to the factory by provincial millers and the company’s own milling facility was first inspected by Amru’s quality control team, which sorts through individual grains searching for imperfections.

“The rice must be checked for qualities like size, chalkiness, the presence of pests, purity and moisture among others,” he said, adding that after a delivery passes inspection, it is placed in stock storage until an international buyer places an order.

Then, he said, the rice is put through final processing, where it is cleaned, polished, and sorted by color and size, before once again going through quality control — this time by a firm contracted by the buyer — and placed into packaging.

Not all of the rice processed by Amru was destined for export, though, Mr. Mok said as he leaned on a pallet stacked with boxes of “awarded quality” organic jasmine rice headed for France.

“For rice that is low quality after we polish it, it is sent to local markets to be sold to people who use it to produce rice wine and food for animals,” he said.