The Cambodia DailyAll the news without fear or favor
Home The Cycle of Rice: Damming the Sea

The Cycle of Rice: Damming the Sea 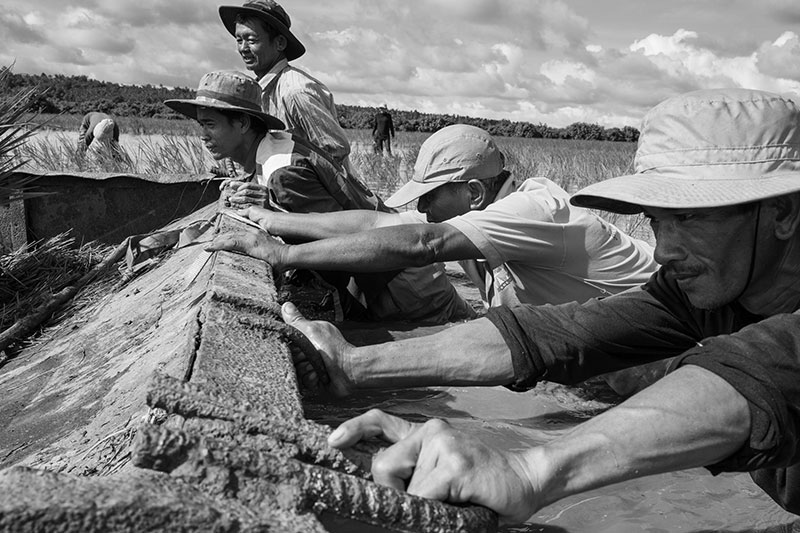 In Preah Sihanouk province, farmers in the coastal lowland rely on dikes to protect their rice from the sea. This is the fourth in a 12-part series on Cambodia’s annual rice cycle, to be published monthly.

PREY NOP DISTRICT, Preah Sihanouk province – When Prak Sarith thinks back to what farming in this coastal district was like 20 years ago, he simply shakes his head, remembering the difficulties of trying to produce an annual rice harvest in an area regularly flooded with seawater.

“When there was no dike, saltwater would always arrive here,” said Mr. Sarith, 42, sitting outside a neighbor’s home on Monday, fresh from an inspection by boat of the nearby rice fields.

“Our yields were very low and it made our lives here very difficult,” he said.

Living along a stretch of coastal lowland bordered by a small mountain range to the west and Veal Rinh Bay to the east, the villagers of Prey Nop district — about 40 km east of Sihanoukville along National Road 4 — have long had to contend with the struggles of producing rice next to the sea.

With the coastal plain — on which the villagers’ rice paddies have sat for decades — situated below sea level during high tide, saltwater regularly intruded into the fields, ruining rice crops.

Beginning in the 1930s, French colonial authorities and farmers attempted to mitigate this problem by constructing of a series of polders — tracts of low-lying land separated from a body of water by dikes — in a successful effort depicted in French writer Marguerite Duras’ 1950 novel “Un barrage contre le Pacifique” (“The Sea Wall”).

The six polders were rehabilitated 20 years later by Norodom Sihanouk’s Sangkum Reastr Niyum government before being heavily altered by the Khmer Rouge in the 1970s in a failed attempt to introduce a dry season harvest to the area.

While the government was ostensibly responsible for the maintenance and operation of the polder system during this period, Kim Sin, who has spent her entire life in Prey Nop, said the task of repairing the dikes and gates fell largely to the villagers themselves.

“Before, during the Khmer Rouge, we were forced to labor in the polders building dikes…but after [the regime’s fall], villagers in Prey Nop were left to volunteer to fix them,” said Ms. Sin, 50. “If we wanted something fixed, we had to do it ourselves.”

“The polders were in very bad shape back then,” she added. “The main dike was very low and during high tide, seawater could go over the top of it and into our fields.”

Ms. Sin said that while she and other farmers continued to plant rice in their fields every year during this period, the holes in the polders’ dikes and broken sluice gates — designed to manage the flow of rainwater into the sea to maintain adequate water levels in the paddies — prevented successful harvests.

“Most of the time, our rice was destroyed,” she said outside her home at the edge of the polders in O’Oknha Heng commune.

“The rice plant would remain, but inside there would be no rice grains.”

It was not until 1998, when the French Development Agency (AFD) launched an $11.5 million rehabilitation project, which also transferred formal maintenance and operational responsibility of the dikes, sluice gates and canals to the local community, that Prey Nop’s polders became fully functional again.

According to a 2006 report by AFD and French NGO GRET, which helped implement the project, nearly 90 km of dike was rehabilitated, 36 sluice gates made operational, and more than 130 km of canal dug or cleared.

“Before the rehabilitation, it is estimated that more than 3,000 ha of land inside polders area were not cultivated, due to salty water intrusion (i.e. nearly 30% of the total surface),” the report says, adding that the total amount of cultivated land within the polders now stands at 10,500 hectares.

“The PUC is tasked with four responsibilities,” Nou Ramy, the association’s longtime executive director, said in an interview on Monday, adding that the PUC currently boasted some 17,000 members from about 7,000 families in Prey Nop.

“First, it is responsible for maintaining the intermediary dikes [between the polders], canals and gates,” Mr. Ramy said, noting that the ministry continued to provide upkeep to the 90-km main dike, which separates the sea from the district’s rice fields.

“We are also responsible for managing the water levels in the polders by opening and closing the sluice gates,” he added.

Each year the association’s elected leadership, which includes a president for each polder, creates a water management plan at the beginning of the wet season, which decides where water levels should be for each step of the following rice cycle.

It then falls on each polder’s president to tell to the polder’s sluice gate operator when to open or close the gates.
Mr. Sarith, who was recently elected president of his polder, said a lifetime of experience in agriculture made managing the water level a simple task.

“I’m a farmer, so I easily know how high or low the water should be in the fields.”

The money collected in fees from PUC members is the association’s only source of income, he said, adding that the funds went toward annual maintenance and the salaries of 10 paid staff members.

Hann Samkat, 63, who has been farming 7 hectares of land in the Prey Nop polders since 2001, admitted that while he was often frustrated with his village PUC representative, without the maintenance of the system’s dikes, sluice gates and canals, life would be quite different for him and his family.

“If there were no polders, I could probably get only about 1 ton per hectare,” Mr. Samkat said. “But now, with them, I am able to get around 3 to 3 ½ tons per hectare per year.”

“If the saltwater were ever able to rise again, everything would be destroyed,” he said.

Mr. Samkat said he saves about 1 ½ tons of his annual rice harvest for his family’s personal consumption, selling the rest to middlemen and wholesalers.

“I have used the money earned by selling the rice for my family, by supporting my children at school and buying equipment for farming,” he said, adding that two of his children worked in banking and medicine, while the third was studying tourism.

Ms. Sin said the polders and PUC had markedly improved her family’s standard of living. Like Mr. Samkat, she is able to harvest about 3 tons of rice from each of her 4 hectares.

“After we sell our product, we are able to pay back any loans we have taken and buy supplies for next year’s crop, as well as tractors and boats,” she said, adding that the yield also fed her family of eight, six of whom lived with her.

“If there were no polders, there would be no harvest,” Ms. Sin said. “And I think that if there was no Polder Users Community, we could not control the dikes. People would try to open the gates by themselves.”

Mr. Sarith, the newly elected polder president, said that with the rehabilitation of the polders, he was able to sell about 90 percent of his yield to buyers.

“Out of the 10 tons I harvest, I keep about 1 ton for my family,” he said. “My family lives through farming. All I’ve ever had is from rice.”