The Cambodia DailyAll the news without fear or favor
Home The Cycle of Rice: Life After Death

The Cycle of Rice: Life After Death 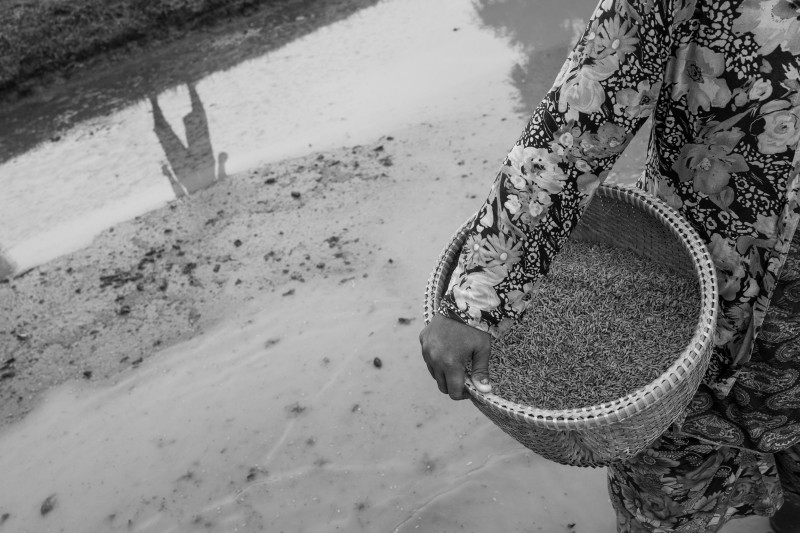 In Kampot province, residents who built a reservoir under the Khmer Rouge are still using it—for their own farms. This is the tenth in a 12-part series on Cambodia’s rice cycle, to be published monthly.

TOEK CHHOU DISTRICT, KAMPOT PROVINCE – Near the famous pepper plantations of Kampot province and flanked by mountains lies an immense reservoir and dam, regarded by many locals as a lasting triumph of their struggle under Pol Pot’s brutal agrarian regime.

Koun Sat is one of four communes that receives water from the Damnak Chang Aeur dam throughout the year. The older residents here, almost all of whom now farm rice for a living, remember rising before dawn and working until dusk to excavate the reservoir, construct the dam and dig irrigation canals.

Research on the dam is scarce, but locals say construction began in what was already a communist stronghold years before Pol Pot took control of the entire country in April 1975.

Sok Ngen, 59, carried and packed dirt by hand to create the embankment around the sprawling man-made lake. She remembers hiding from enemy planes that were still flying overhead in 1974.

“The planes carried the bombs, so when we heard the planes we would cover ourselves with leaves while we carried the earth,” she told reporters during a visit to the area earlier this month.

Working in a group of twelve, Ms. Ngen, then a teenager, worked for hours on end—hungry and often ill from bouts of Malaria—to build the structure she now relies on for water to irrigate her 1-hectare rice field.

“I suffered so much while building the dam. But it is good now because people have free water,” she said.

Because of the back-breaking work she and others did decades ago, the recent drought that devastated much of the country—particularly subsistence rice farmers—went largely unnoticed by Ms. Ngen and her husband, Lam Daun, 71.

“I heard that other people don’t have enough water,” Mr. Daun said. “I feel very grateful that I have the water from the dam while other areas are dry.”

There were many people, however, who did not survive to see the fruits of their labor. Chhang Oy, 51, said tragedy frequently struck inexperienced and malnourished workers.

“One woman was building the dam, and it collapsed and the water rushed through—very fast—and killed her. She was carried off,” she said.

Ms. Oy said tens of thousands of people worked from late 1973 to 1979 to construct and maintain the dam, parts of which often broke and had to be rebuilt.

“After the Pol Pot regime, I knew that about 10,000 were killed around the dam because their graves were dug up,” she said.

Despite still suffering from problems due to being forced to work on a broken foot, Ms. Oy said she was proud of what she had helped create.

“I am not sad. I am happy with what I built. Now I have enough water for farming,” she said.

Though the dam has supplied local communities without incident for decades, repairs on its three sluice gates are long overdue, said Peav Pach, who is in charge of responding to requests for water.

The middle gate is curved like a hunting bow and red with rust, and Mr. Pach said it takes three men to open.

“The provincial water resources department informed us that they would fix it at the end of this month, but now the rain has come and it’s full. It needs to be dry to fix the screws,” he said.

Large mangosteen, banana and pepper plantations have begun to use electric pumps to siphon from the lake without permission, but Mr. Pach said he was not particularly concerned.

“It’s always enough, we never worry,” he said of the 700-hectare body of water.

Much of the community has a similarly relaxed attitude toward the commercial farms drawing from the reservoir—built under a militant communist regime.

“The lake will never be dry; it’s always full,” said 51-year-old Hok Hek. “I’m not worried, because the lake is so deep.”