The Cambodia DailyAll the news without fear or favor
HomeWEF2017
WEF2017

CNRP voters have gotten used to being told that their votes are wasted in Phnom Penh, a city often described as a “longtime opposition stronghold.”

But a glance at 2012 commune election results tells a different story, with the CPP sweeping all of the city’s 96 commune chief spots up for grabs. In the national election a year later, results swung dramatically in the other direction, as the CNRP won the majority of the popular vote in 80 out of those 96 communes.

On June 4, election watchers say the CNRP has a chance to once again redraw the municipal map, claiming victories at the villa gates of capital-based CPP leaders. But with money and power still held by the central government, experts say any CNRP-run communes will struggle to make good on their election season promises without a win in next year’s national vote.

“It’s a kind of…political motivation, whether they want to develop any particular commune,” said Soeung Saran, executive director of the housing rights group Sahmakum Teang Tnaut (STT). “The driver is still the big guy, so how can you change it?”

In 2012, low voter turnout and a fractured opposition strongly favored the ruling party, according to political analyst Cham Bunthet. But the following year’s national vote saw strong turnout and a united opposition in the form of the CNRP.

“Cambodian people do not see the value of local elections,” Mr. Bunthet said on Wednesday, predicting some CNRP pickups and continued strength by the CPP in the capital. “They want to change the head.”

On the streets of the capital, that word is on the tips of voters’ tongues: change.

“I want to change the current situation,” said a 55-year-old bridal shop owner who gave her name only as “Ra,” as she sat trimming flowers on Wednesday.

“I don’t think the current government can solve most of the issues,” said her husband Kroch Bunleang, who, like his wife, declined to name his party allegiance. “I will vote for the party of freedom and democracy.”

The CNRP predicts it can channel that disenchantment to take at least 60 percent of the 105 communes up for grabs this year, according to Morn Phalla, head of the party’s Phnom Penh executive committee.

“In Phnom Penh, we are optimistic,” he said on Wednesday, pointing to leaders he claimed were untainted by corruption and the party’s plans to decentralize authority and money to communes.

Over in the opposing camp, Nget Chaddavy, head of the CPP’s municipal committee, said the CPP’s vision of local governance was dictated by higher-ups.

“We will implement plans based on our upper-level policies,” he said.

He was not willing to disclose his party’s target in the capital.

“Let’s wait and see the results,” he said.

If the CNRP’s projections of majority commune pickups come true, it could wrest control of the municipal council. Headed by the Phnom Penh governor and elected by commune councilors, the body is responsible for forming development plans for the city, managing assets, and crafting its annual budget—at least on paper. 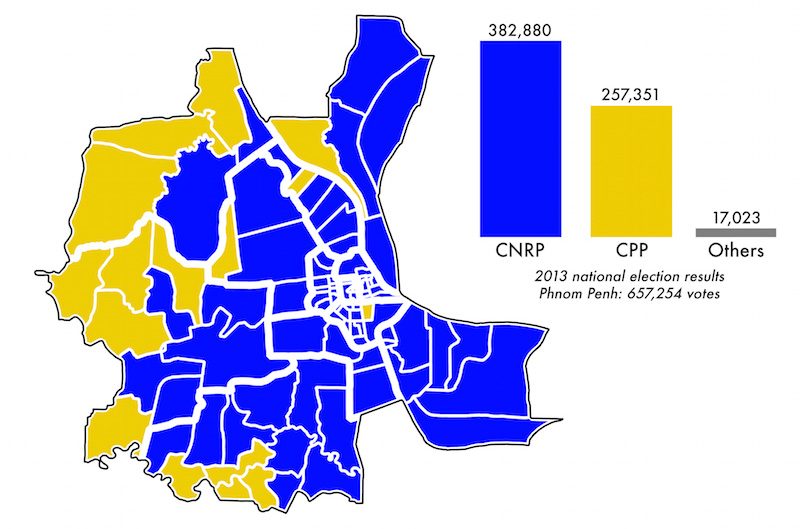 But with the Interior Ministry in control of the city’s purse strings and empowered to appoint or dismiss the municipal governor at will, it remains to be seen whether an opposition-led council could make any progress on its agenda.

“It has not been the case like this before,” said Eang Vuthy, head of Equitable Cambodia, a housing and development NGO. “And that’s why this election is going to be a very big change if the other party gets control.”

Opposition-led commune chiefs might be able to make a difference in day-to-day operations, Mr. Vuthy said, but may also face roadblocks when requesting funds, making them look powerless to voters.

“I can foresee that there might be a lot of obstacles created by the other party,” he said.

Mr. Bunthet agreed, citing the might of the municipal governor over councilors.

“Legally, they are elected by the people, but the [municipal] governor oversees them and makes the decisions,” he said.

The situation “makes people feel like it’s a kind of double standard,” he said.

Some lower-level employees of the central government have already broken ranks with party leaders to join the opposition, according to Sam Sok Suon, a CNRP commune candidate in Pur Senchey district’s Boeng Thom commune.

“They’re concerned it may impact their job if they show their face with us,” he said. “CNRP won’t take anyone to be the enemy…. We will serve the people without discrimination to political trends.”

That wide umbrella would have to include 49-year-old tuk-tuk driver Chea Samnang, who says he is happy with the current party and leadership.

Why risk war with newcomers, the Khmer Rouge survivor said, when he can now “go anywhere, anytime,” in peace?

“They saved me and developed the country from nothing,” he said. “I don’t need to get more than that.”