Youk Chhang, executive director of the Documentation Center of Cambodia (DC-Cam), was recently awarded the Ramon Magsaysay Award, known as “Asia’s Nobel Prize,” for his work bringing to light the horrors of the Khmer Rouge regime. In the second installment of a four-part series, the Cambodia Daily’s Michelle Vachon examines the pioneer’s journey from the killing fields to the podium.

This is Part 2 of a four-part series. Read Youk Chhang, Part I: The Long Journey to Asia’s Most Respected Award.

The journey that led Mr. Chhang to DC-Cam and his quest to make people aware of the human cost of conflicts began in the early 1970s when Cambodia was engulfed in civil war. General Lon Nol’s government, which had run Cambodia since ousting Prince Norodom Sihanouk in 1970, was attempting to prevent Khmer Rouge forces from taking over the country. Mr. Chhang’s father, a civil servant, joined the Lon Nol army and was killed soon after Khmer Rouge troops marched inland, occupying province after province, from their bases along the Vietnamese border. Backed by China and Prince Norodom Sihanouk, who had taken refuge in Beijing in 1970, the Khmer Rouge forces soon became unstoppable and, upon seizing Phnom Penh on April 17, 1975, had control of the entire country.

On that day, fourteen-year-old Youk Chhang was home alone in the Tuol Kok district, several kilometers from the center of the capital. His mother Keo Nann had gone to the city center to attend to one of her daughters about to give birth, and was prevented from returning home to her son. The boy stayed put, waiting for her, until a group of young Khmer Rouge soldiers—roughly the same age as him—discovered him during a house-to-house search and ordered him to leave. 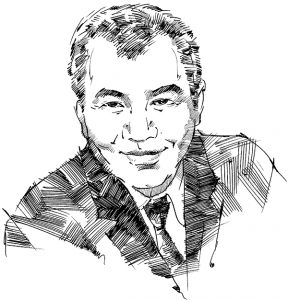 Mr. Chhang was forced to join the millions of people the Khmer Rouge forcibly evacuated from the capital. When asked by the Khmer Rouge which village he came from, he recalled his mother’s village which he had visited when about eight years old. Unable to remember its name, he said it was close to Phnom Chisor mountain in Takeo province, roughly 50 kilometers south of the capital.

When he finally arrived, he was helped by villagers who still considered his mother one of their own, and ended up being hidden at his grandfather’s house by two teenage girls. Eventually the entire village came to know of his existence, but no one reported him to the Khmer Rouge village chief.

His mother eventually arrived from the capital and, following the public execution of a relative—his cousin Chhang Phy, the brother of Lon Nol’s Minister of Information, Chhang Song—in the village, Mr. Chhang and his mother were sent west to a remote  village/work camp near the Thai border in what is now Banteay Meanchey province.

Life soon became a blur as Mr. Chhang and the other workers in the camp were starved and put on forced labor. At one point, he was arrested for picking mushrooms for one of his sisters living nearby who was pregnant and starving. “They brought me to the middle of the village and beat me mercilessly in front of nearly a hundred villagers, including my mother,” he recalled. Mr. Chhang was then thrown in jail and interrogated and beaten night after night. To survive he would say anything, from confessing to dreaming of a cold drink to missing his friends. Eventually freed, he would later learn that an older prisoner had begged for his release and been killed in exchange.

In January 1979, Vietnamese forces assisted by a Cambodian contingent seized control of the country. The Khmer Rouge fled to the Thai-Cambodian border, killing countless civilians along the way.

Mr. Chhang, who had just turned 18, built a cart and, along with his mother, started walking barefoot towards Phnom Penh.  It would take them months to reach the capital. As they walked, they met more and more people, each one, like them, hoping to find a missing relative or friend. And progressively, it started to feel like a society, albeit a broken one, once again, Mr. Chhang said.