Officials from the national down to the local level should face an investigation into possible collusion and noncompliance in issuing and enforcing building permits, labor groups urged in a press conference on Wednesday.

The call came after 36 people were killed in a building collapse in Kep province last week, an incident Prime Minister Hun Sen dubbed a national tragedy. It followed a similar collapse in Sihanoukville in June that killed 28, and another in Siem Reap province in December that killed three.

Construction of the Kep building had begun without a permit and it rose to seven stories despite approval for just six stories, according to a local official. 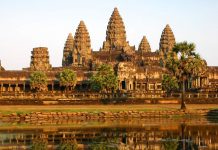