As Barack Obama was declared president of the United States for a second term yesterday, about 50 anti-eviction protesters from the Boeng Kak and Borei Keila communities camped out in front of the U.S. Embassy and appealed for the president’s help in addressing land rights when he visits Phnom Penh later this month.

But hours after the camp was established, roughly 100 riot police with batons and shields moved in under the cover of darkness and removed the peaceful protesters.

“We have come here to congratulate President Obama on his win, and we ask him to intervene and release our activists who are in prison,” said Boeng Kak resident Bouv Sophea, as she and other evictees knelt and prayed outside the embassy holding a large picture of Mr. Obama.

The protesters had set up their small camp in the gardens opposite the main gate of the embassy at about midday following an Appeal Court decision to deny bail to two outspoken activists, Yorm Bopha from Boeng Kak and Borei Keila’s Toem Sakmony.

Before being removed by the riot police, the protesters said they had planned to stay outside the embassy until Mr. Obama’s arrival in the country.

Mr. Obama is scheduled to visit Cambodia for the East Asia and Asean summits, which run concurrently from November 18 to 20.

Since his visit was confirmed in September, there has been an ongoing outcry from local people, human rights groups and leading opposition lawmakers, including Mu Sochua and Sam Rainsy, who have called on Mr. Obama not to visit the country unless the government can address human rights and election reform in the country.

Sean McIntosh, spokesman for the U.S. Embassy, declined to comment directly on the protesters outside the embassy’s entrance. But in an email he said, “Protecting basic human rights, such as land rights, is an integral part of the U.S. Mission’s efforts to encourage just and democratic governance in the Kingdom of Cambodia.”

Human rights groups decried the government’s show of force at the embassy.

“This is just one more piece of evidence that shows the government doesn’t respect people’s rights,” said Long Kimheang, spokesperson for the Housing Rights Task Force, who was outside the embassy when the protesters were removed.

“Their demonstration affected security of the embassy, so our authority has the obligation to protect the embassy. We begged them several times to break away from the embassy, but they didn’t listen,” he said.

Earlier yesterday, the same group of protesters lined Sisowath Quay near the Appeal Court to hear the court’s decision on whether it would release Ms. Bopha and Ms. Sakmony on bail.

As they waited for the verdict they held lotus flowers and pictures of the two women with signs that read, “Stop the violence.”

Ms. Bopha was charged with intentional violence in September and thrown in jail ahead of a trial for her alleged role in the August beating of two moto-taxi drivers, and Ms. Sakmony was charged with making a false declaration in an attempt to get replacement housing. Human rights activists have called the charges dubious and say the charges are merely an attempt to silence the two women.

When word spread at about 9:40 a.m. of the court’s decision to reject the bail request for both defendants, loud cries were heard in the crowd and what was a peaceful protest turned into a scuffle between the protesters and riot police blocking the road.

“This court is not independent, and this is an act of injustice,” Luos Sakhorn, Ms. Bopha’s husband, said at the protest.

Inside the courtroom, Ms. Bopha and Ms. Sakmony were told bail was denied because Ms. Bopha could not prove that she needed medical treatment. Ms. Sakmony was refused bail because she is still considered a threat to society, said Yin Savath, Ms. Sakmony’s lawyer.

“I will appeal to the Supreme Court because it is injustice,” Ms. Bopha said before being placed in a van to Prey Sar prison, where she’s been held since her arrest in September. 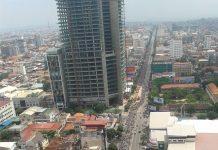