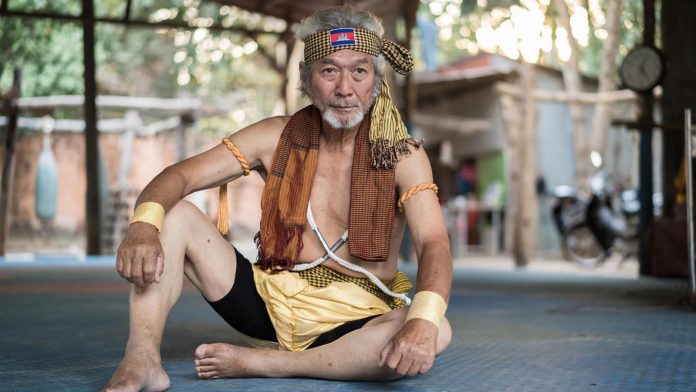 At 73, He’s fighting to revive the martial art you’ve never heard of

The story of San Kim Sean, which he is grateful to relay in the shade of his training camp during a scorching Cambodian September, really begins some 800 years ago with the birth of his martial art, bokator.

Kim Sean, 73, repeats the word for emphasis: “empire.” Known to his students as “Grandmaster,” he flips through a book he illustrated and wrote describing some of the supposedly thousands of moves in bokator. A black-and-white drawing of a man with a six-pack and bulging muscles angles one elbow to the ground and another in the air for the page on “elbow-hooking.” Instructions read: “Keep elbow in straight down-top position, with fingers hooked. Push elbow down strongly.” Some of these techniques, he says, are even carved into Angkor Wat. “Like America’s now strong, they have a good army and good weapons. At that time Khmer empire [was] like America now.”