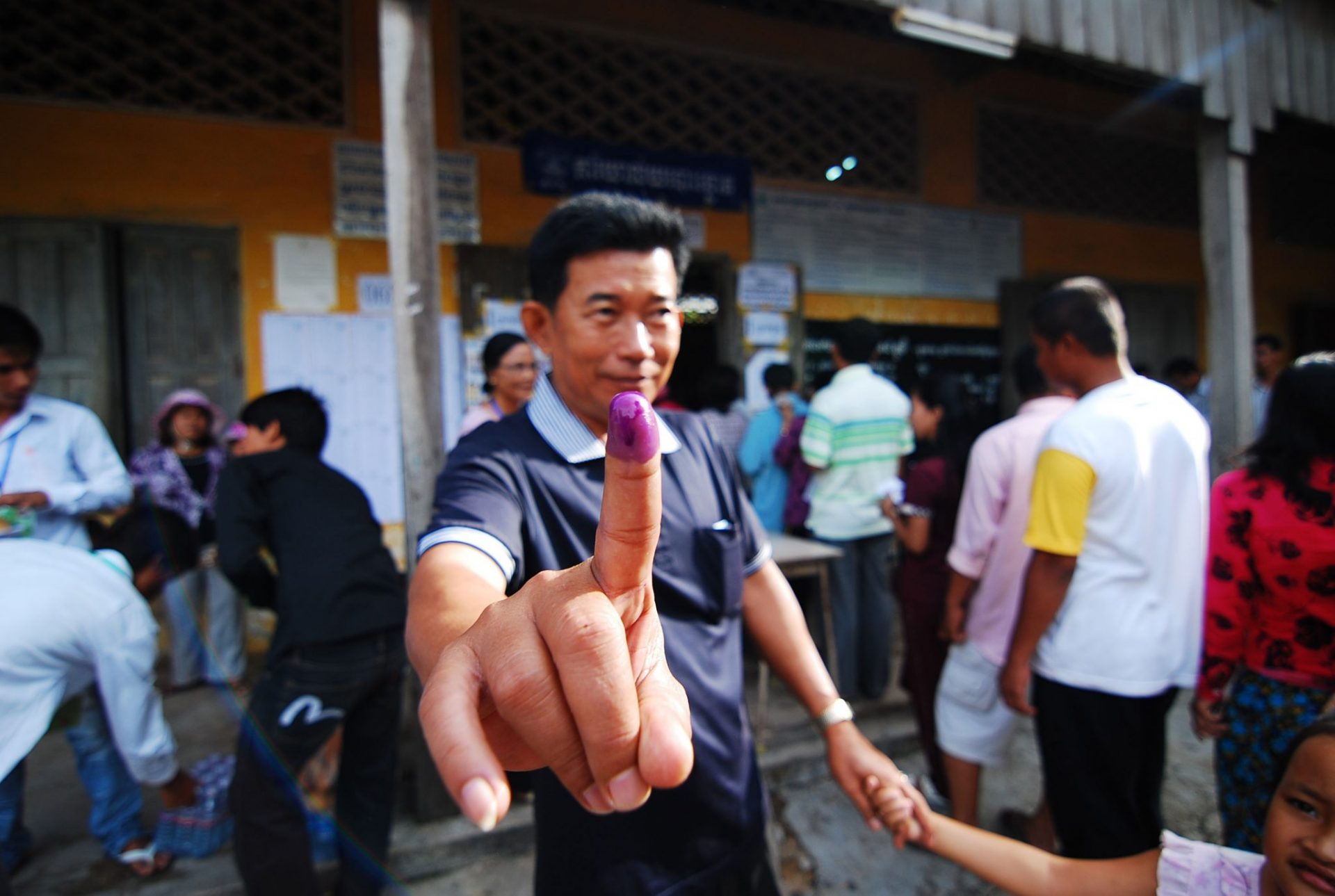 The year began with rubber bullets and evictions, and ended by be­ing branded the worst year in a de­cade for respect of human rights in Cambodia.

“This verdict adds to the many tragedies which occurred in 2012, making it the wors[t] year in over a decade when it comes to human rights and rule of law,” Naly Pilorge, director of rights group Licadho, said in response to the imprisonment of Born Samnang and Sok Sam Oeun.

On Thursday, the pair was sent back to pris­on by the Court of Appeal to serve their 20-year sentences for the killing of union leader Chea Vichea in 2004. The Supreme Court re­leased the two in 2008 after ruling that the case against them did not stand up.

Long considered scapegoats for the assas­sination of Chea Vichea, the re-imprisonment of the two capped a year in which violence and impunity took central stage for another year in Cambodian society.

On January 3, on a dusty patch of road in Phnom Penh’s Borei Keila commune, hun­dreds of armed riot police squared off against about 200 residents desperate to cling onto their homes, many of which were shacks on small patches of land. The clashes raged all day—the culmination of years of dispute be­tween the residents and the powerful property firm Phanimex. Thirty people were injured and homes were torn down when the police even­tually defeated the homeowners’ protest.

Casting a glance over the events that made news headlines over the past year: the mur­der of environmental activist Chut Wutty, the deaths of some 65 children from Hand, Foot and Mouth Disease, Cambodia’s chairman­ship of Asean; none dominated headlines more than the October 15 death in Beijing of King Father Norodom Sihanouk.

A monarch whose illustrious and turbulent life came to embody the fraught history of his country, Norodom Sihanouk’s death touched young and old alike and their reverence for the late King Father was demonstrated around the country.

An estimated 1 million people lined the streets of Phnom Penh from the airport to the Royal Palace in a show of devotion as the King’s body was returned from Beijing. Tens of thousands thronged the square in front of the palace to light incense and pay their respects.

Another death on April 26 attracted much less attention, but it will forever mark 2012 as the year when one of Cambodia’s most devot­ed environmental activists died at the hands of men with guns.

Two months earlier, on February 20, a gun in the hand of a government official was again turned on unarmed members of the pub­lic. Then it was the governor of Bavet City, Chhouk Bundith, who was the chief suspect in the shooting of three female factory workers during a violent strike protest at a special eco­nomic zone. Mr. Bundith was later charged, but never arrested. Earlier in December, Mr. Bundith was cleared entirely of the crime leav­ing a senior Bavet police official as the sole re­maining suspect.

In May, a 14-year-old girl, Heng Chantha, was shot dead by military and police forces during a massive operation against so-called rural rebels in Broma village, Kratie province. While the government branded the residents of Broma “secessionists,” their only act of defi­ance against the government appeared to have been their protests against the loss of their land to a private company with an economic land concession.

While the death of Heng Chantha has nev­er been investigated, and government officials have only said her shooting death was an ac­cident, the authorities were able to jail popu­lar radio station owner Mam Sonando for 20 years for allegedly providing some form of long-distance encouragement to the villagers in Broma.

Mr. Sonando, 72, was overseas at the time of the police operation against Broma, and be­yond the government’s use of the world “se­cession” there was no other indication that any­thing very rebellious had taken place in the village. U.S. President Barack Obama referred to Mr. Sonando as a political prisoner during his attendance at the Asean and East Asia sum­mits in November.

Despite the apparent deterioration in the hu­man rights situation in the country, the authori­ties did not take kindly to be told as much this past year.

U.N. special rapporteur Surya Subedi, who made two visits to Cambodia this year to as­sess the human rights situation, came under fire from government officials.

Two reports presented to the Human Rights Council in Geneva in September caused up­roar in the government after Mr. Subedi said that economic land concessions (ELCs) ben­efit only a minority of a people, while the hu­man rights consequences of the concessions are stark, and Cambodia’s sustainable eco­nomic development is threatened by the prac­tice of giving huge swathes of land to private companies.

Mr. Subedi also said that elections in Cam­bodia are beset by major flaws that could lead to a return of political violence in the country. He went on to call on the government to en­sure that international standards are being met ahead of the July 2013 national election.

Mr. Subedi also commended a purported freeze on the bestowing of new land conces­sions, which was announced by the prime min­ister during one of his visits in May. He was pleased to see that Mr. Hun Sen was spear­heading a large-scale land-titling program, us­ing university students instead of civil servants, that would see hundreds of thousands of people given land titles around the country.

The elaborate program saw some 2,000 of the military fatigue-clad student volunteers fan out across the country to help demarcate vil­lagers’ land as part of the titling process.

But land disputes remained a core issue the length and breadth of the country in 2012. The ongoing issue of evictions from Phnom Penh’s Boeng Kak lake area reached a new intensity in May when 15 activists were charged with il­legally occupying land, disputing the author­ities and aggravating rebellion. They were summarily convicted and put behind bars for two-and-a-half years. All were released upon appeal in June, but their original convictions were upheld.

Not everything in 2012 generated so much debate. It was also a very positive year on some fronts. 2012 saw another period of strong eco­nomic growth in the country. The World Bank and International Monetary Fund largely cred­ited Cambodia on its economic growth policies and a host of large Japanese corporations start­ed doing business in the country.

This was the year that Cambodia started manufacturing small motors and car parts. It was also a year that saw 200,000 tons of milled rice leaving the country, a new record. For­eign investment continued to rise and Cambo­dia even got its stock market up and running in April when the Phnom Penh Water Supply Au­thority launched its initial public offering.

In June, about 5 million people cast votes in the third commune elections, securing anoth­er grassroots victory for the ruling CPP who retained control of all but 41 of the country’s 1,633 commune chief positions.

In July, the Sam Rainsy Party announced that it would be merging with the Human Rights Party to form the Cambodian National Rescue Party and make a stab at gaining more power in 2013’s general election.

Cambodia also participated in the Olympic Games in London in July and August, but even that was not without its controversies after Cambodia’s best marathon runner, Hem Bun­ting, was left off the national team while a Japa­nese comedian and amateur long distance run­ner, Neko Hiroshi, was set to run in his place.

In the end, however, Mr. Hiroshi was deemed ineligible to participate by the Olym­pic committee as he had not possessed Cam­bodian citizenship long enough to make him able to compete for Cambodia.

Panic set in and schools were shuttered around the country in July after it emerged that some 65 children had died of what the World Health Organization said was Hand, Foot and Mouth disease caused by a severe strain of en­terovirus 71. Children treated at Kantha Bopha hospital in Phnom Penh experienced severe swelling of the brain and lung failure before passing away.

The Ministry of Education, Youth and Sport made the decision to close all primary schools and kindergartens across the country in order to stem a feared spread of the virus. The WHO eventually said that the spread of the disease had stabilized.

2012 was also the year that the first sitting U.S. president, in this case Barack Obama, vis­ited Cambodia.

Mr. Obama’s attendance at the Asean and East Asia summits in Phnom Penh was his last stop on a three-country tour—which also took in Burma and Thailand—to promote Ameri­ca’s “pivot” to the Asia Pacific region. Ahead of the trip, U.S. lawmakers urged him to press Mr. Hun Sen on the government’s deteriorat­ing human rights record when the two met. In a closed-door meeting described by the U.S. as “tense,” Mr. Obama addressed a number of human rights concerns with Mr. Hun Sen.

He urged Mr. Hun Sen to hold free and fair elections, set up an independent electoral com­mission, let opposition parties do their work in freedom and release all political prisoners.

Cambodia made international headlines ear­lier in the year when hosting the Asean Sum­mit in April, the regional bloc failed to issue a closing, joint communique because of a dispute over the wording regarding territorial claims in the South China Sea. While Phnom Penh supported Beijing’s position that the disputes should be dealt with bilaterally, the Philippines and Vietnam wanted the issue dealt with under the auspices of the regional grouping.

The cash-strapped Khmer Rouge tribu­nal continued to be dogged by controversy in 2012 with allegations of political interference swirling when Reserve Co-Investigating Judge Laurent Kasper-Ansermet resigned in March stating that his national counterpart You Bun­leng—also the President of the Court of Ap­peal—was stymieing his efforts to investigate the cases known as 003 and 004.

Proceedings continued in Case 002, though with only three defendants—Nuon Chea, Kh­ieu Samphan and Ieng Sary—after a fourth de­fendant, Ieng Thirith, was ruled unfit to stand trial and released in September. The year end­ed on a sour note for the war crimes court with national staff told they would not be paid in 2013 unless new sources of funding could be found.

Finally, in the closing days of the year, Born Samnang and Sok Sam Oeun became the lat­est in a long line of people rights groups say have been unfairly jailed in Cambodia.

In their case, they have one final appeal left, which their lawyers filed on Thursday at the Supreme Court.

Whether or not they will see 2013 as free men remains to be seen.

The Cycle of Rice: Crossing the Continents

Cycle of Rice: Power and Politics