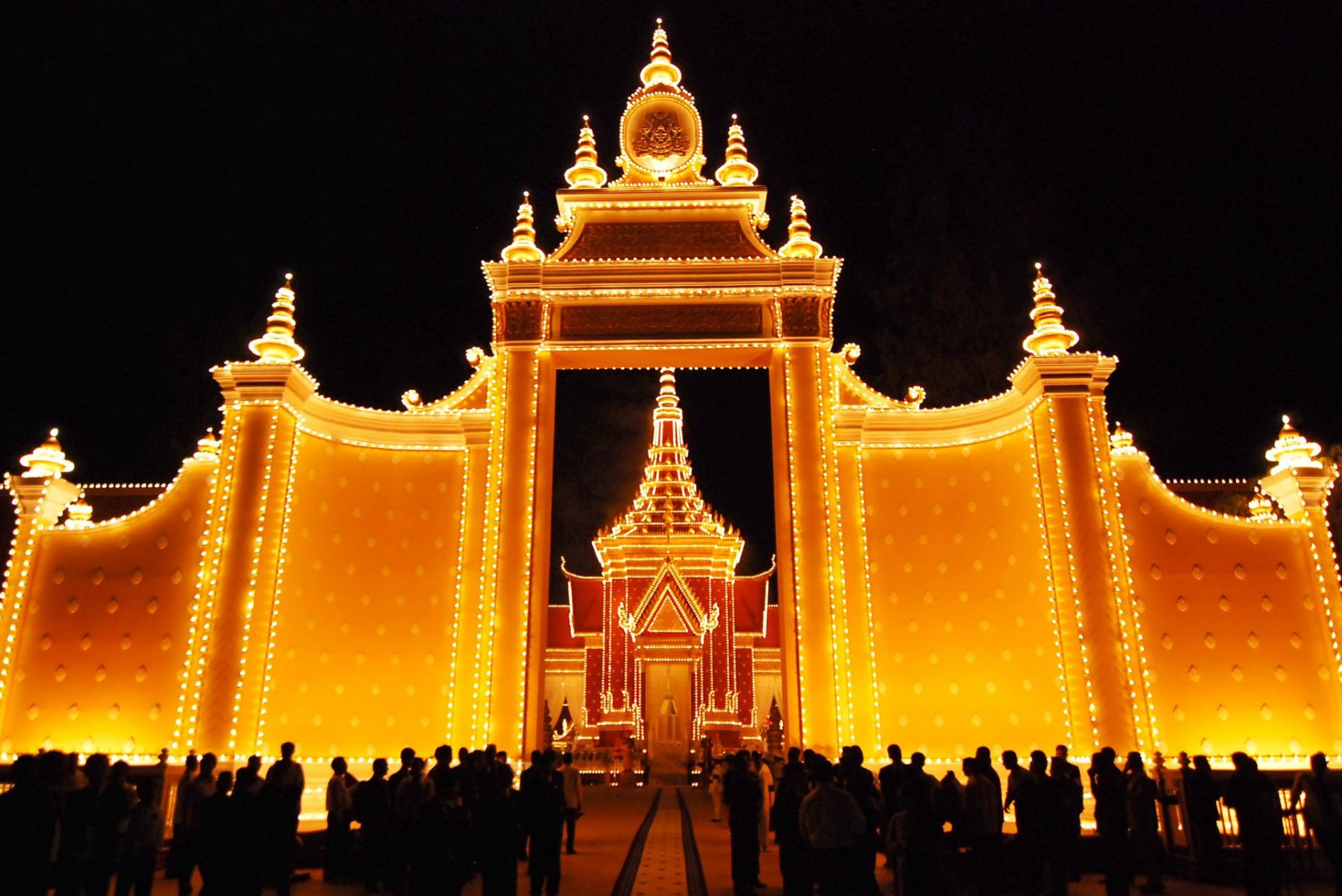 A Nation Bids Farewell to Its Beloved King Father

In a ceremony as tender as it was regal, a country yesterday bade farewell to a king, and an era in Cambodia’s modern history came to a fitting end.

Heads of state sat nearby and lenses from around the world were trained on the elaborate crematorium at Veal Mean where the body of late King Father No­ro­­dom Sihanouk lay. But, in the end, it was the silence that preceded the rip and roar of fireworks and artillery gunfire that spoke volumes about what his passing has meant to his beloved son, wife and subjects.

Months of planning, construction and nationwide mourning culminated in a moment that saw a grieving King Norodom Si­ha­moni and Queen Mother Noro­dom Monineath offer one final prayer to the late monarch. Then, they quietly lit a candle each be­fore screens were drawn across the atrium in which the King Fa­ther’s body lay.

After they brought the candles in contact with his sandalwood oil-soaked coffin, a final 101-artillery gun salute thundered across Phnom Penh at 6:33 p.m. Fire­works erupted, pyrotechnics lit up the sky and the few faithful “children”—as the late King called them—that managed to gain ac­cess to the street adjacent to the site, gazed up at the crematorium, their hands clasped in prayer, their eyes red and cheeks wet.

Inside the crematorium, flickers of flames could be seen through gaps in the trellis-like screens. A steady plume of smoke began to rise in the center of the ornately decorated structure and seeped through the roof and apex, blowing gently southward in the direction of the Royal Palace.

“May his Majesty go to para­dise and Nirvana, to be close to our Buddha,” King Sihamoni said in a speech after the cremation.

The ceremony was executed seamlessly and on a remarkable scale that spoke to Norodom Si­hanouk’s illustrious life. A notable absence, however, was felt on the streets directly bordering the cremation site and grounds in front of the Royal Palace.

All were largely devoid of any life, save for members of the media, security personnel and a few tourists. This had not been the case in the morning; people began lining up to pay their final respects to the King Father at about 4:30 a.m. yesterday. By 11 a.m., however, all had been told to move and the area lay empty.

As the day drew on and the sun began to set over the city, mourners thronged at barricades surrounding the area. All were met with the bitter disappointment of being told they could not go any further.

Still, that did not stop them. Some people climbed over barriers near Wat Ounalom, while others pushed and shoved against police manning the barricades.

The frustration of not being able to bear witness to the event was too much for some, who walked off angrily.

Nean Srey, 29, sold one of her valuables—a ring—to pay for her mother, children and relatives to come to Phnom Penh for the roy­al funeral. Her hopes fell flat.

In the end, many people on the streets around the Royal Palace crowded into restaurants and cafes to watch the events unfold on small television sets.

In Wat Botum Park, where tens of thousands had gathered, lining Sothearos Boulevard for blocks, many who came out to say goodbye to the late King Father were frustrated that there weren’t even television screens set up for the crowd to see what was going on at the cremation site.

“They should have set up TV screens where there were many people blocked from going to see the cremation,” said business student Yim Thol, 28, who was among he crowd on Sothearos Boulevard blocked from the grounds near the palace and cremation site.

“The government only took care of foreign dignitaries,” he added.

About 100 mourners managed to gain access to Street 178, from where they could see the cremation site. At about 6 p.m., the hum of prayer rose up among the crowd, softly cutting through the silence.

“Please come back, your ma­jesty,” they said, “to solve the prob­lems of our country.”

As the last of the crematory smoke billowed across the sky, several thousand mourners were finally able to fill the grounds in front of the Royal Palace. At first, they sat quietly and contemplatively, many in prayer.

But as the car bearing King Si­ha­moni and Queen Monineath left the cremation site for the short journey to the palace, the crowds surged and for a moment, it appeared the masses were on the brink of a crush.

A solemn Queen Monineath smiled and waved as the car drove past the adoring, swelling melee. Today, she and King Si­hamoni will scatter some of the late mon­arch’s ashes over the Mekong.

After the last of the officials had gone, the site from which so many had been excluded was re­claimed. Thousands milled about and thronged toward the cremation site. The melancholy drone of a news report flashed across a screen mounted on one of the pal­­­ace walls. Pockets of mourners sat quietly. For some, with the night came a final vigil in the presence of the King Father’s portrait.

“I wanted to see the King for one last time,” said 80-year-old Reoung Yory. “I don’t have anywhere to go tonight, so I will be sleeping in front of the Royal Palace.”