Prime Minister Hun Sen is politicizing a dispute over Cambodia’s shared border with Vietnam to divert public attention from the European Union’s reinstatement of tariffs on key exports that threatens to implode the country’s already weak economy, an opposition official charged Tuesday.

The withdrawal of duty-free, quota-free access to the EU’s market under the “Everything But Arms” (EBA) scheme for some 20 percent of Cambodia’s exports—a decision that was announced in February—went into effect on Aug. 12.

The EU’s move came in response to the Hun Sen government’s failure to reverse rollbacks on democracy and other freedoms required under the trade arrangement. Affected exports include goods from Cambodia’s vital garment and footwear industries. 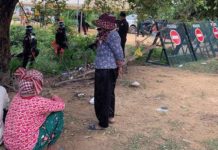