Late last month Cambodian journalist Ros Sokhet, who is the publisher of the privately-owned Khmer Nation newspaper, was arrested for allegedly committing “incitement to provoke serious chaos in social security”. After being questioned at the Cybercrime Bureau of the Phnom Penh Municipal Police for two days, he was charged with incitement to commit a felony, an offence which carries a maximum penalty of two years’ imprisonment.

According to local media reports, Sokhet was targeted over a social media post in which he criticised Cambodia’s Prime Minister Hun Sen for grooming his eldest son, Hun Manet, to take over the leadership of the country after his retirement.

Despite Cambodian security forces’ apparent attempt to silence Sokhet, Hun Sen’s plan to nominate his son to be the country’s next leader is no secret to anyone watching Cambodian politics closely. 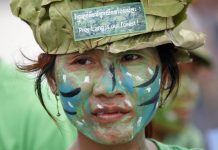