Has Cambodia’s autocratic ruler Hun Sen suddenly become an advocate for democratic rules and accountability? Or are there other reasons for his seemingly principled stand on the murderous Myanmar junta? During an ASEAN summit in October, he blamed the slow progress of ASEAN’s plan to solve the crisis in Myanmar on the junta’s “lack of cooperation,” adding that coup leader Senior General Min Aung Hlaing would not be invited to the upcoming Asia-Europe meeting hosted by Cambodia in November—and he wasn’t. Min Aung Hlaing was indeed excluded from the Asia-Europe meeting on Nov. 25. Three days prior to that, the coup maker was also barred from attending the China-ASEAN summit, which was held to commemorate the 30th anniversary of bilateral relations between Beijing and the bloc.

But compared to what the foreign ministers of Indonesia and Malaysia have had to say about the coup in Myanmar, Hun Sen was still very cautious in his criticism. His recent statements are nevertheless in sharp contrast to what he had to say in the days after the Feb. 1 coup, which were more in line with what could be expected from him: “Cambodia shall not make any comments on the internal affairs of any countries regardless if they are within the framework of ASEAN as member states or outside.” 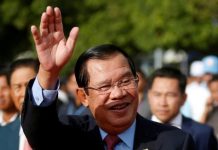