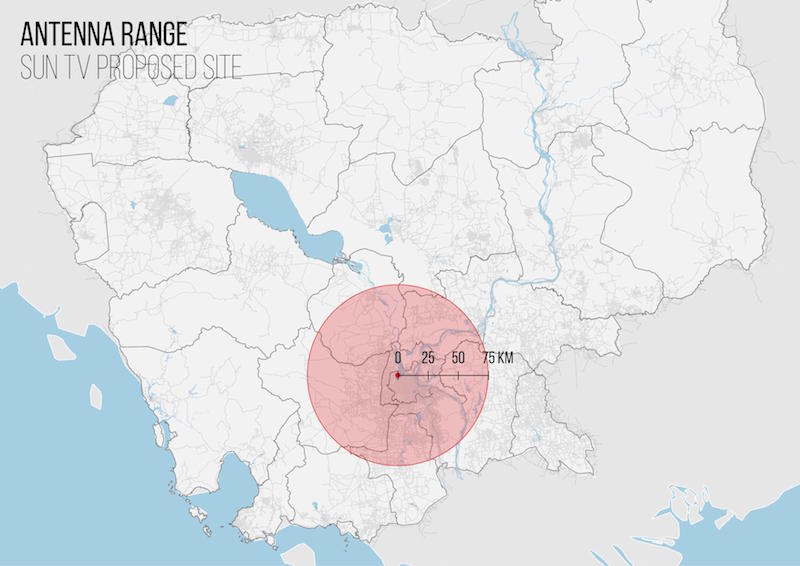 A Year to Elections, CNRP’s Sun TV Still a Dream

It was supposed to be the opposition’s information pipeline to the heartland, an unfiltered channel—available 24/7—into the homes of rural Cambodians who still got most of their news from a television landscape dominated by the long-ruling CPP. The CNRP would call it Sun TV, a hopeful reflection of the rising sun in the party’s logo.

It has not worked out that way—at least not yet.

The CPP offered the opposition the promise of a coveted TV license in a package of concessions aimed at wooing the CNRP back to the National Assembly in 2014, 10 months after the opposition launched a boycott in protest of national elections the year before that it claimed were stolen. Three years on, with another round of national elections only 12 months off, the promise remains a dream.

The Information Ministry granted the promised license to the private company set up to run the future station, Cambodian Independent Media, within months. Since then, though, the project has been bogged down in bureaucracy and mired in public opposition to a planned radio tower, which the CNRP accuses the CPP of fomenting behind the scenes.

Yet the opposition says Sun TV remains a priority and “we are working very hard day and night,” said CNRP lawmaker Yim Sovann, the party’s spokesman.

“Through the media we can disseminate the political message to the workers,” he said. “Most of the farmers still get their information from TV.”

But having already missed three self-imposed targets for a broadcast date—the commune elections that came and went on June 4 were the last—the CNRP is wary of setting another. Mr. Sovann was reluctant to commit the party to launching Sun TV in time for next year’s all-important elections for the National Assembly.

The Land Management Ministry, he said, “takes a long time.”

Kun Lum Ang, the opposition senator running Cambodian Independent Media, said the paperwork was still working its way through the many layers of government in Phnom Penh.

The company had already bought a plot of land in Prek Pnov district, an erstwhile rice field on the capital’s northern outskirts, and secured permission from the district to start filling it in, she said.

She said the district was still assessing an application filed four or five months ago to allow for construction, and another application to build the actual tower and studio should have reached City Hall a few weeks ago. 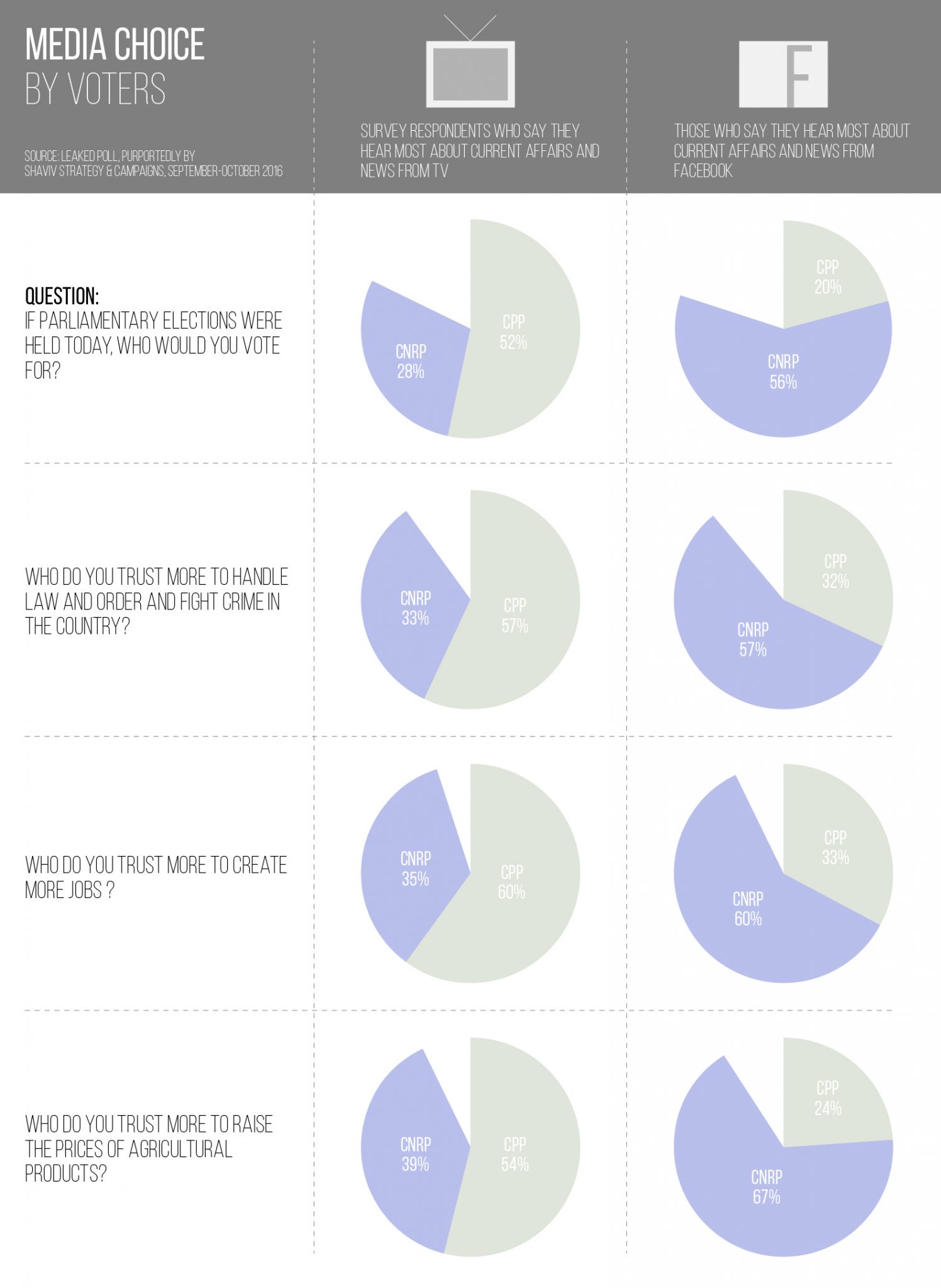 The head of Prek Pnov district’s land management office, Sou Sivutha, said he approved the tower and construction about a month ago.

Sarin Vanna, the city’s director of land management, said any application from the company would get its due regard, but as of last week he had yet to see one. In any case, he said he did not deal with TV towers and only reviewed requests for buildings between 500 and 3,000 square meters. City Hall spokesman Met Meas-pheakdey said he was unaware of any application reaching the municipal government either. Ms. Lum Ang said she did not know the size of the studio the company was asking to build and declined to comment on the city’s claim that it had not received the application.

“It is so complicated. They do not make it easy. But we know this and we don’t complain,” she said. “The civil servants in charge of the documents have it and keep it and let us wait. When we ask, they say it is not ready, so what can we do?”

The obstacles include more than red tape.

In August 2015, then-CNRP Senator Hong Sok Hour, the man heading the Sun TV project at the time—and Ms. Lum Ang’s husband—was arrested and charged with two counts of incitement for appearing in a video on Facebook presenting an inaccurate 1979 border treaty between Cambodia and Vietnam. The CNRP insisted it was an innocent mistranslation, but the courts decided it was a deliberate forgery and handed him a seven-year prison sentence last year.

In April last year, authorities in Kandal province rejected the CNRP’s request to build a TV tower on a plot of land it had bought in Takhmao City after local families complained that the transmissions would make them sick, sending the party in search of a new site. The CNRP claims that some of the locals later confided to the party that they were put up to the complaint by government officials.

In 2015, the CNRP also abandoned plans to raise money for the station by selling shares in Cambodian Independent Media after the Cambodian Securities Exchange said any company wanting to do so had to follow its rules. The party went back to soliciting donations.

In 2014, Ms. Lum Ang said it would cost $10 million to $20 million to get a full-fledged TV station up and running. A year later, CNRP lawmaker Yem Ponhearith said the party could get a tower up and start broadcasting for only $3 million.

As of last week, Ms. Lum Ang said the party had about $500,000 in the bank for the station. She insisted it would be just enough to get started. The party has said it would even launch the station by playing CDs if it had to.

The CNRP has yet to work out a programming plan for Sun TV. Whether it launches with or without one, it has to wonder how many people will actually tune in.

In December, a public poll by the Open Institute, a local NGO, found that, for the first time, slightly more Cambodians were turning to the internet for their news than TV—30 percent to 29 percent, respectively.

An opinion poll from around the same time, this one apparently commissioned by the CPP and leaked to the media last month, showed an even wider gap. It found that 40 percent of Cambodians were getting most of their news from Facebook. Only 27 percent said the same of TV.

But the same poll, carried out by the Israeli political consultancy Shaviv Strategy and Campaigns, also found a sharp divide in the political preferences of the two groups.

The results confirmed the CNRP’s strong presence on Facebook, where it can already reach Cambodia’s young, media-savvy voters with little interference. Reaching the country’s older, rural voters on a regular basis would be Sun TV’s master stroke.

Moeun Chhean Nariddh, director of the Cambodia Institute for Media Studies, said those voters—more set in their ways, with years of party loyalty behind them—would prove tough to sway.

“People who support the CPP are hard-line,” he said. “It’s hard to change their minds.”

The opposition will have to reach them to have a chance. But even if Sun TV does start broadcasting within the year, it won’t reach far—not at first.

Ms. Lum Ang said the equipment Sun TV planned to start with would stretch only 75 km from its tower, covering a modest strip of the country where the opposition already has a fair amount of support. Most of the country—CPP country—will be out of reach.

“Seventy-five kilometers is very small and will cover only Phnom Penh and surrounding provinces,” Mr. Chhean Nariddh said. “So a large portion of the public will be left out.”

But for all that, he believes the CPP is still wary of a TV station in the opposition’s hands that could sway swing voters before what is shaping up to be a tight race. He believes the government will keep Sun TV off the air, or shut it down should it manage to launch, if it believes the station poses too much of a risk.

“The people are curious—they want to see the other side of the story,” Mr. Chhean Nariddh said. “If the ruling party thinks the CNRP TV is a threat, they may do something to stop the launch.”

But even a broadcasting Sun TV would likely be neutered by the government’s definition of neutral news coverage, he said.

“If you are in favor of the government, you are 100 percent neutral. But if you are independent you are in doubt,” Mr. Chhean Nariddh said.

“In the eye of the government, even the independent outlets…they don’t consider you independent, let alone an opposition TV.”

Besides the one channel the government owns outright, eight of the country’s 10 most popular TV broadcasters are owned by those politically affiliated with the ruling party, according to a media monitoring project by Reporters Without Borders and the Cambodian Center for Independent Media.

NGOs say the CPP has more control over TV than any other media in the country. A number of independent studies have stated that the CPP uses that control—coupled with bribes, intimidation and a pay-to-play news model—to shape coverage that hypes the ruling party and ignores the opposition.

When tens—possibly hundreds—of thousands of mourners flooded Phnom Penh’s streets last July in a mass cortege for the assassinated political analyst Kem Ley, the largest funeral procession Cambodia had seen in more than a decade, none of the channels carried it, claiming they were either short of staff or had other entertainment programs prescheduled.

When the CNRP planned to run a TV spot for last month’s commune elections featuring former party president Sam Rainsy, the CPP cried foul and the National Election Committee disqualified it on the grounds that Mr. Rainsy—still a popular figure for the opposition while living abroad to avoid multiple prison sentences—was a convict.

Many Cambodians believe the assassination and the convictions were politically motivated, though the government denies it.

So the CNRP is still banking on a big payoff from Sun TV. Ms. Lum Ang said the goal was to bring viewers a semblance of balance.

Mr. Sovann, the CNRP spokesman, said the party had kept its frustrations with the pace of progress to itself for now to keep from riling the officials who hold the fate of Sun TV in their hands. But he said the party had its limits and would give them another month before resorting to the one outlet it had left—the press.

“After that we will tell the media what is going on, why there is still a lot of obstacle,” he said. “Our patience has almost run out.”