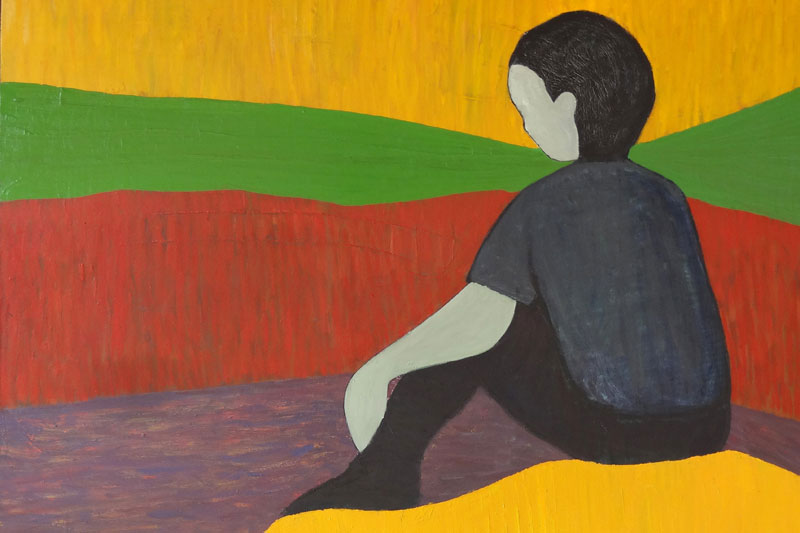 Works From ‘Artist City’ are Showcased in Phnom Penh

The exhibition “Made in Battambang” is an opportunity for Phnom Penh residents to discover the incredible talent and diversity of the visual arts in Battambang City.

Held at the Institut Francais, the show opening Thursday night will contain 113 works by 26 artists, amounting to one of the biggest visual art exhibitions ever to take place at one location in Phnom Penh.

Works will include Srey Bandol’s series “Mummy,” sculptures of people so vibrant that they seem about to move, and Tor Vutha’s three-painting series “Prisoner” whose  close-up of a face that shouts of pain and anger built over years of injustice, as well as Chea Sereyroth’s grey abstract vision of the “Present and Future,” and Bor Hak’s classic portrait of a stoic boy far older than his age entitled “Into the Darkness.”

There is also Khchao Touch’s gentle abstract of a woman’s body that she named “Care,” and Roeun Sokhom’s vivid portrait of the slain environmental activist Chut Wutty entitled “Resistance.”

The exhibition, which took six months to organize, was curated by Alain Troulet in cooperation with Mr. Bandol, Darren Swallow and artist Mao Soviet. Their goal: To show once and for all that Battambang is the country’s trailblazer in visual arts.

“Actually, we do know that Battambang is a cultural center, a place with lots of artists who produce all kinds of artworks,” said Mr. Soviet, who runs the Maek Maek gallery on Street 2.5 in Battambang.

This vibrancy is due in part to Phare Ponleu Selpak, an organization that runs circus and performing arts programs as well as a visual arts school headed by Mr. Bandol and Mr. Vutha that has trained many artists in recent years, inspiring them to be fearless with themes and techniques. Meant to give talented students from poor families the means to earn a living through the arts, it has steadily produced the most dynamic artists in the country over the past 20 years.

Even though young artists all learn the same techniques and fundamentals at Phare Ponleu Selpak’s school, Mr. Soviet said, “After they have graduated, they have to find themselves, to define who they are as artists, and it’s a bit hard,” but this produces a great variety of works.

Battambang has always been a city of artists, Mr. Bandol said. “I don’t really know why…. But this goes back to post-Angkorean times.” The city then became a regional center of the arts and religion—some of its pagodas are centuries old—for both Cambodians and Thais in the region, and this remained the case throughout the 20th century, he said. Ros Sereysothea, the famed singer of the 1960s, was from Battambang, he added.

About three years ago, Phare’s visual arts teachers and graduates created the artist community center Sammaki on Street 2.5 so they could have a place to meet and hold workshops and exhibitions.
Today, Mr. Swallow said, “The scene is stronger and more vital than it has been in a long time.”

Groups of artists are forming to share studio space, and new galleries are opening, such as Mr. Swallow’s Lotus Bar and Gallery, also on Street 2.5.

“I think it’s just the creative vibes of the city,” he said. “There’s a lot of artists working in a small space, a great community feel amongst [them]…and it gives a little boost to their creative juice. And it’s a great community to live in and obviously to work.”

In spite of the fact that so much of the country’s art is produced in Battambang, artists from the city were virtually ignored in the arts festival “Season of Cambodia” held in New York last year, said Mr. Troulet, a former director of the French Cultural Center in Phnom Penh, who now spends half his time in Battambang.

“Made in Battambang” is meant to remedy the situation by giving Phnom Penh a sample of what is happening in the northwestern city, which artists hope will become a contemporary-arts and cultural destination for both Cambodians and visitors, he said.

In view of the number of artists in Battambang, participation in the exhibition had to be limited to works produced in that city so that each artist exhibiting could be allocated a 6-meter-long stretch of wall space in the Institut Francais’ galleries.

For instance, surrealist painter Oeur Sokuntevy and photographer Kim Hak, who work in Phnom Penh and exhibit internationally, could not participate. However, Pen Robit who is now based in Phnom Penh, went back to Battambang to produce an artwork that would could be exhibited at the show, Mr. Troulet said.

Artists will hold a live painting performance on opening night Thursday. The exhibition will run through March 15 at the Institut Francais and then re-open in Battambang on March 21.