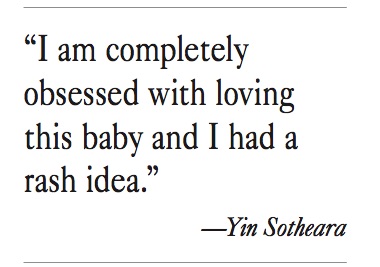 Woman Who Kidnapped Baby Sentenced to 11 Years in Prison

A woman who kidnapped her friend’s 6-month-old baby and later abandoned her at a dumpsite was found guilty of attempted murder in absentia on Wednesday.

Ms. Sotheara, a widow and mother of two, confessed at her trial earlier this month that she had taken the baby because she was “completely obsessed” with her.

No explanation was given on Wednesday for why Ms. Sotheara did not appear. She has been held at Phnom Penh’s Prey Sar prison since her arrest in March.

Ms. Sotheara said at the trial that she had plotted to take the baby while playing cards at her friend’s nearby home.

“I am completely obsessed with loving this baby and I had a rash idea,” she said.

Sneaking into the baby’s room, Ms. Sotheara taped the girl’s mouth shut, lowered her out of the window in a black plastic bag with a rope and took the baby home.

She tried to secretly return the girl after receiving a panicked call from her friend. At about 4 a.m. she returned to her friend’s house with the baby hanging off her motorbike in the plastic bag. But when she saw her friend’s brother outside, she hid the baby under her motorbike’s seat and drove past.

Ms. Sotheara said she laid the baby on a wooden bed by a food stall down the street. But the brother testified that he found the baby at a dumpsite after secretly following Ms. Sotheara.

Speaking after the sentencing, Cheat Sokha, the defendant’s lawyer, said she would appeal the verdict.

“For me, it is very serious,” Ms. Sokha said. “I will go to meet her and prepare the documents to appeal.”