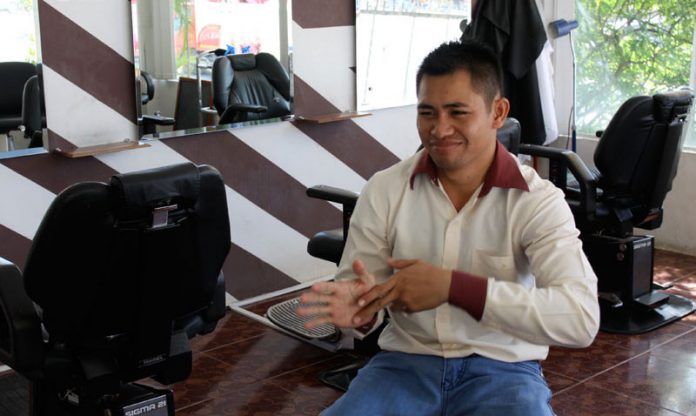 Without Hearing or Memory, Lost in Cambodia

Sitting in a hair salon on the outskirts of Phnom Penh, a young deaf barber recounts what can on­ly be described as an extraordinary tale.

In September 2007, he found himself in the city with no papers, no family, no identity and—most crucially of all—no way to express himself to others.

According to staff at the Mary­knoll Deaf Development Program (DDP), the nameless and stateless man turned up on their doorstep with nothing to identify him but the characters “F4” crudely tattooed on the inside of his right arm.

Inside a backpack, he carried a stack of unused postcards and a bundle of brand-new riel notes, suggesting he could be a foreigner. He also had an aversion to Cam­bodian cuisine.

“He had no language of any sort. He was dressed like a West­erner [but] he looked ethnically Khmer [and] he didn’t look like he grew up here,” said Charles Dittmeier, a Catholic priest who has overseen DDP for 14 years.

“[We] sat down with him all day long trying to figure out, ‘Who are you, where are you coming from?’”

Mr. Dittmeier and his colleagues regularly meet deaf Cambodians who are only able to communicate using natural gestures, due to a lack of available support for deaf people and a limited understanding of deafness in rural communities.

But the young man—who is now known simply as F4 because of his tattoo—was a puzzle as he seemed to have come from abroad, where deaf children are usually taught to sign.

“I don’t think I am Khmer. I think I may be Filipino, Burmese or Thai…. I think I was born at the border with another country next to Cambodia,” F4, who estimates his age to be 28, said in an interview last month.

“What I remember from the past is that there was a war where I was living before.”

In an attempt to unlock F4’s memory, DDP staff took their new charge to embassies around Phnom Penh, showed him pictures of flags and landmarks of various countries, and even took him to a Buddhist wat, Muslim mosque and Christian church.

The latter seemed to stoke some recognition, and a betting slip from a Siem Reap gambling parlor found in his pocket appeared to be another clue.

But despite extensive efforts to discover his identity—including help from local rights group Li­cadho’s investigators, several branches of the police, Interpol and the international and Cam­bo­dian branches of the Red Cross—nothing turned up.

“[H]e was saying, through gestures, that he was from someplace where there’s rivers and mountains, and that doesn’t narrow it down too much,” Mr. Dittmeier said.

In a last-ditch attempt to reunite F4 with his family, DDP hired a private investigator who specializes in missing persons, but even that drew a blank.

Seven years on, F4 has completed DDP’s education program and now works seven days a week at Dr. Hair in Toul Kork district, where he is still slowly adjusting to life in Phnom Penh.

“Sometimes it’s difficult to communicate, but the staff here know a little sign language and so when hearing people come to get their hair cut, they can explain what [hair­style] they want,” F4 said, add­ing that he still holds out hope of one day finding his family and leaving Phnom Penh.

While F4 can remember flashes of his former life—having long hair as a little boy, a sign outside his childhood home, and being left behind in Siem Reap—the long years he spent without any language at all means that excavating and expressing his memories re­mains difficult.

Although his story is particularly unusual, F4 is in fact one of the three to four deaf people a year who turn up at DDP with no ap­parent connections to the world around them. Mr. Dittmeier said that all of the others, however, are un­doubtedly Cambodian.

“We’re getting more and more deaf people who are brought to us, they have no family, they have no home, they literally have no identity,” he said.

“Our social work project tries to trace them back geographically to some­place, then we start asking around the district, the communes, the villages, ‘Does anyone know this person?’”

To most people, the concept of not knowing your own name or where you come from can seem baffling. But as DDP social work project manager Tay Vannarith explains, most deaf children in Cambodia’s provinces never re­ceive any level of education.

“Unfortunately for deaf people, they cannot read or write where they come from [because] they were never taught,” he said.

As in F4’s case, the organization goes to great lengths to help them. It runs advertising campaigns in local media and has even developed a book of photographs showing the main landmarks of each province, in an attempt to trigger some recognition.

Mr. Vannarith said that if a family can be traced, the social work team proceeds with caution as the deaf person could have been abandoned, kicked out of their home or abused.

“First we need to visit the family to find out the situation there, to see if the client can come back to the family or not,” he said.

“We take a photograph of the family to show to the client and ask if they recognize the people or not. Then we set up a meeting with the governor or commune chief [to check their history].”

According to Mr. Vannarith, in several cases deaf children have run away from home in anger at not being able to properly communicate with their families.

Mr. Dittmeier said that in the past DDP had tried to tackle the communication breakdown in ru­ral areas by setting up sign language classes for parents and siblings, but the families usually “come once and never come back.”

In the long term, Mr. Dittmeier en­visions a future when “itinerant teachers” will visit people’s homes and help them find a better way to connect to their deaf family member—a process that could al­so help stem the small but steady stream of runaways and lost souls making their way to Phnom Penh.