KANDAL VILLAGE, Kompong Chhnang Province – Though they live in floating houses moored to the banks of the Tonle Sap river, few of the nearly 2,500 ethnic Vietnamese villagers here can truly call Cambodia home.

Like many of his neighbors in Kompong Chhnang City’s Kandal village, Nguyen Van Hung, 59, settled on the Tonle Sap in the early 1980s when he resettled in Cambodia after fleeing the Khmer Rouge a decade earlier. 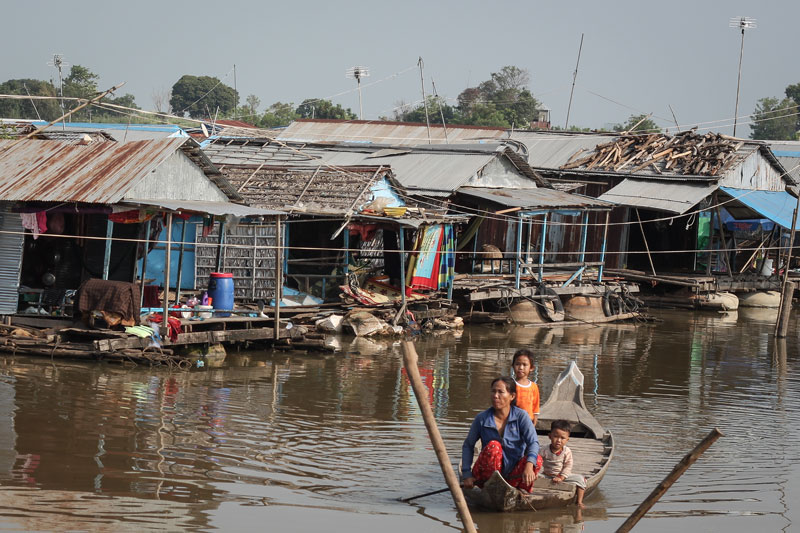 But when he returned, he found that his Cambodian citizenship was no longer recognized.

“I have asked for Cambodian citizenship since 1982,” Mr. Hung said in an interview last week. “The government won’t do it.”

“We were born here, so we should have it,” he said. “We want to live here forever.”

In the early 1970s, fervent anti-Vietnamese sentiment began to spread throughout Cambodia under the government of Lon Nol, forcing hundreds of thousands of Vietnamese to flee to Vietnam. As the Khmer Rouge began its ascent to power, almost all Vietnamese either left the country, were forcibly removed or executed.

After Vietnamese forces toppled the Khmer Rouge in 1979, the ethnic Vietnamese refugees slowly began to return to the country, but many had lost their citizenship.

Thousands built floating homes on the Tonle Sap, a cheaper and more attainable alternative to settling on solid ground; without citizenship, the returnees were legally barred from buying land. And unable to find work elsewhere, most families settled into lives on the river as fishermen.

The CIA World Factbook in 2012 estimated that Vietnamese people made up roughly 5 percent of Cambodia population—about 750,000 people. The Factbook does not differentiate between ethnic Vietnamese, Vietnamese nationals and Vietnamese immigrants.

Sok Phal, head of the Interior Ministry’s immigration department, which began a nationwide census of foreigners in August, said last week that he did not now how many ethnic Vietnamese were living in the country.

In interviews last week, nearly a dozen ethnic Vietnamese living on the Tonle Sap river said they neither held Cambodian citizenship, nor knew how to acquire it.

Lounging on a hammock strung over the deck of his floating house, Nguyen Van Giao, 73, said he was born to Vietnamese parents in Cambodia in 1943.

The aging fisherman said he and his family fled the Khmer Rouge in 1975 and he did not return until 1995. Since settling on the Tonle Sap, he said a lack of Cambodian citizenship had affected almost every aspect of his life.

“We don’t have citizenship, so we don’t have rights like Cambodians,” he said. “People think we are illegal immigrants and they look down on us.”

Mr. Giao also said that without a government-issued ID card—which he, his children and grandchildren do not possess—job prospects were meager.

“If we had Cambodian IDs, it would be much easier to find jobs and run a business,” he said.

Mr. Giao said he had never attempted to apply for Cambodian citizenship because he had never been told how to do so. And he fears that broaching the subject with authorities would only cause problems for his family.

“I worry they will deport my family and me,” he said, adding that he does have Vietnamese citizenship.

But while he is concerned about the future of his family, Mr. Giao also said he considers himself fortunate.

“I’m happy because my granddaughter gets to attend the primary school,” he said. “And the school pays 2,000 riel per day to her.”

The school Mr. Giao’s granddaughter attends is the newly opened Samakki Primary School, a public institution built and operated with the support of the Minority Rights Organization (MIRO), a local NGO that provides assistance to ethnic Vietnamese and Khmer Krom communities.

While most Vietnamese children attend informal classes taught by unqualified Vietnamese teachers, he said, all 47 available spots at Samakki Primary School were filled when its first-ever semester began in September.

“Before the school was running, the Vietnamese parents didn’t trust our project,” Mr. Butmao said. “But so far, they are very happy.”

Cambodia’s 1996 Law on Nationality states that in order to qualify for Cambodian citizenship, applicants must be able to read and write Khmer, demonstrate an understanding of Cambodian history and prove they have lived continuously in the country for at least seven years.

Mr. Butmao said his school would offer its Vietnamese students the tools to meet the first two qualifications.

“Now, they can go to school, learn about Cambodian culture and learn the Khmer language,” he said.

Lyma Nguyen, an Australian civil party lawyer who represents ethnic Vietnamese at the Khmer Rouge tribunal, noted that school records could also be used to prove that Vietnamese students are residents of Cambodia.

“If they had access to school, it can give them a leg up to get documentation such as birth certificates,” she said.

“It just sets them up for life and establishes who they are and that they were born in Cambodia,” she said.

But Ms. Nguyen said that while obtaining a birth certificate—the first step toward obtaining full citizenship—was within reach of most ethnic Vietnamese in Cambodia, the rest of the process was more difficult.

The requirements for citizenship are vague and not well understood, even by authorities, she said.

“Even to this day, I’m uncovering subdecrees [related to immigration and nationality] that haven’t been published publicly,” she said.

“The law itself is inaccessible,” she added. “It’s all very randomly implemented and is almost at the whim of who is sitting behind the desk.”

Mao Chandara, director-general of the Interior Ministry’s identification department, which is tasked with issuing ID cards and birth certificates, said that applying for them is a simple process.

“For foreigners who are legally living on Cambodian land, they can ask for citizenship,” he said. “They have to fill out an application form.”

Thai Srung, a representative of the Vietnamese community in Kandal village, however, said the cost of simply applying for citizenship is far beyond the means of most members of his community.

Mr. Srung said local officials had told him application fees came to about 750,000 riel, or about $185, per person.

“For us poor families, we can’t afford it,” he said.

“We should have the same rights, but the rights are biased toward Cambodians,” he added.

“For me, I don’t care about citizenship, but I worry for future generations.”