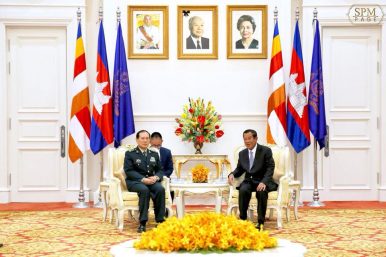 What’s in the China-Cambodia Military Base Hype?

One of the major storylines around the recently-concluded round of ASEAN summitry in Singapore was a new round of international speculation over old fears about the establishment of a Chinese navy base in Cambodia. The concerns around a shadowy, decade-old port project that has proceeded in fits and starts, are not new, and the raising of the issue by U.S. diplomats directly with Cambodia have led to the typical semantic debates about what constitutes a “base” or “military use.”In reality, the recent controversy ought to focus attention on, rather than distract from, the broader issue that deserves attention, which is Beijing’s deepening military inroads into Cambodia in recent years and the concerns that this trend raises.

The idea of a deepening Chinese security presence in Cambodia is not new, and nor are the allegations about Beijing’s intentions. China has long been a key defense partner for Hun Sen’s Cambodia, including its top provider of military equipment. Beijing has also long paid attention to the naval realm of ties, providing support for the development of Cambodia’s naval capabilities including financing for the purchase of patrol boats and upgrades to Ream Naval Base – which, even at the time, had raised issues about this being part of Beijing’s so-called string of pearls strategy in what is now being termed the Indo-Pacific.