Home News ‘We Are Angkorian’

SANTUK DISTRICT, Kompong Thom province – Surrounded by statues of the Buddha crafted by his own hands, the most imposing standing more than 3 meters, Tep Thean is quick to acknowledge that his work cannot compare to the accomplishments of craftsmen of the Angkorian period some 800 years ago. To Mr. Thean, even the suggestion of a comparison is humorous, but the gap between his creations and those of his ancestors is far from a concern to the 41-year-old stonemason.

While the artistic feats of Bayon, Ta Phrom and Banteay Srei remain outside his reach, he is content to be able to make a living from what he sees as a proud Khmer tradition: fashioning beauty out of cold, hard stone.

Mr. Thean lives and works in Samnak, a village of about 1,300 people in Kompong Thom province’s Santuk district, which is home to a group of 21 families who make a living as stonemasons.

Gray and white statues of the Buddha, Apsara dancers, Naga serpents and other figures from Hindu and Buddhist mythology line the well-trafficked National Highway 6, which runs through the dust-choked village, located about 15 km from the provincial capital.

In Samnak, the noise of tour buses and trucks speeding past competes with the rhythmic sounds of chisels and hammers on rock and the grinding of saws, as stonemasons labor in workshops set up in front of their modest homes.

Across the highway from Mr. Thean, 30-year-old Seng Sabun supervised two other stonemasons toiling on a mammoth sculpture of the Buddha in meditation. One deftly roughed out the statue’s eyes with a hammer and chisel, while the other, a teenage boy, focused on the 2-meter-wide base with a small rotary saw.

“We started work on this statue three months ago and it will take about two more weeks to finish,” said Mr. Sabun, whose words were barely audible over the discordant noise of traffic, power tools and Cambodian pop music emitted from a nearby speaker.

Mr. Sabun added that his shop usually had five to seven carvers, but on this particular day, most were busy with the seasonal harvest in the village’s rice paddies.

“The buyer paid $6,000 for this statue,” he said, explaining that it had been commissioned by a wealthy family from Kompong Cham, who planned to donate it to a pagoda in the province’s Chamkar Loeu district.

“Some of the time monks come to visit our workshop to order the statues that they want, but often our customers are rich people and tycoons who come to buy statues to donate to pagodas.

“We like to keep the statues beside National Highway 6 to attract the passengers who travel through our village. Sometimes, when they see our location, they park and buy one,” Mr. Sabun said, pointing to the row after row of statues lining the road. 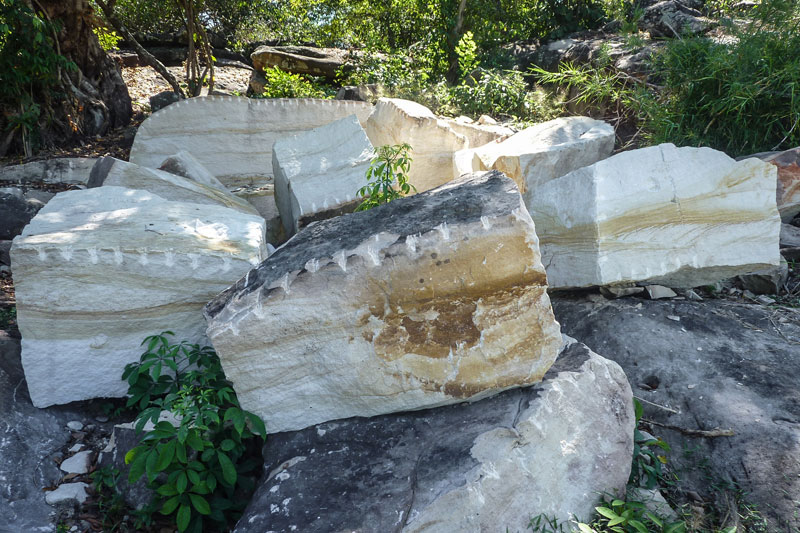 Located at the base of the province’s most sacred mountain, Phnom Santuk, Samnak’s villagers have always had easy access to sandstone, in the past using it to fashion whetstones to sharpen knives, machetes and other tools for use in their own homes.

Still, despite this access, it was not until the late 1990s that village residents began to turn the mountain’s white-colored rock into sculpted figures.

Samnak’s villagers said the transition from whetstones to today’s statues can largely be attributed to one man—a migrant to the community named Khim Chin.

Khim Chin—affectionately called “Cheang” Chin by villagers, an informal title given to someone who is skilled with his hands—arrived in Samnak in 1998, having previously worked as a stonemason in his native Banteay Meanchey province.

“My uncle decided to come to Samnak village because at that time he received information that Phnom Santuk had one kind of stone that our province didn’t have,” his nephew, Pa Channa, 41, recalled.

“For example, from Phnom Santuk, we could create a 5-meter-tall Buddha statue that in Banteay Meanchey would not have been possible.”

Mr. Channa, who was taught how to carve stone by his uncle after he graduated from high school in 1993, added that Khim Chin had also received word that there was no one in Kompong Thom working as a stonemason at the time. In Samnak and the other villages near Phnom Santuk, most worked as rice farmers.

Sensing a business opportunity, Khim Chin—along with his wife and nephew—moved to Samnak, where he purchased a plot of land at the edge of the community and established a small workshop.

“We started work in Samnak from scratch because when my uncle arrived nobody knew stone carving skills. We needed to train the workers, who were mostly local villagers,” added Mr. Channa.

In the early 2000s, after a few years of training under Khim Chin, this initial group of Samnak stonemasons began to set up modest workshops of their own along Highway 6, and, in turn, to employ groups of local apprentices eager to learn the craft.

Today, this practice continues, albeit primarily using stone taken not from Phnom Santuk, but from Phnom Tbeng, located about 150 km away in neighboring Preah Vihear province.

In the late 2000s, according to villagers, complaints from local monks about the stone quarries dotting sacred Phnom Santuk coupled with decreasing quantities of quality sandstone in the area forced the stonemasons to find a different source.

While 21 families own and operate workshops in Samnak, villagers estimate the number of locals working as stonemasons to now number more than 100, many of whom are apprentices hoping to one day start their own businesses.

Mr. Sabun said that while most of Samnak’s residents continue to rely on rice farming as their primary occupation, stone carving allows villagers to supplement their earnings.

“I’m still a farmer, but I now have one more job contributing to my family’s livelihood. The stone carving job is 40 percent of my income and rice farming is 60 percent,” Mr. Sabun said, adding that in a good month he could make about $400 to $500 from his work as a stonemason.

The income he generates from stone carving helps subsidize his rice farming, he said, allowing him to remain independent from banks and private lenders when buying seeds and other supplies at the beginning of each growing season.

Taking a break from chiseling a waist-high slab of rock that had begun to show the vague outlines of the Buddha, 23-year-old Saing Sok Niet, an apprentice at the workshop of Kong Chan, Samnak’s deputy village chief and one of Khim Chin’s first students, said he aspired to one day have his own shop, just like his boss.

“In the future, if I have enough money, I will create my own job.”

In recent years, the villagers have also sought to expand upon their technical skills with assistance from outside Samnak.

Responding to requests placed by Samnak’s stonemasons with its Kompong Thom provincial office, the Ministry of Culture and Fine Arts has sent annual teams of stone carving experts to the village since 2012.

Led by accomplished artist Suos Sodavy—the deputy director of the ministry’s department of art and craft—the teams have taught villagers how to standardize the quality of their work by introducing techniques such as using printed design plans as well as providing further instruction on traditional Khmer motifs.

“We needed to train them because [Samnak’s] stone carvers had just learned from the previous generation and their capacity was still limited,” Mr. Sodavy said, adding that he has also brought his team to stonemason communities in Siem Reap, Pursat and Preah Vihear provinces.

Mr. Channa said Mr. Sodavy’s lessons have been useful to Samnak’s stonemasons and that they have asked his team to return on a more frequent basis.

“We have learned how to make statues in traditional Khmer style from [Mr. Sodavy and his team] and that has made our statues more beautiful and attractive.”

While the stone carving community in Samnak continues to grow, it now does so without Khim Chin. The master stonemason passed away in 2008.

For a man whose life was spent creating works of art that will likely last for centuries, he left behind surprisingly few physical traces in the village.

Villagers say only one statue of his remains in Samnak—a small, knee-high, painted Buddha that is kept in a temple at the village’s pagoda. Mr. Channa, who still lives in Samnak with his family and continues to work as a stonemason, only has a few photographs of his uncle’s other work.

It appears that to most of Samnak’s villagers, Khim Chin’s legacy rests less on what he created and more on what he passed on to them: the skills to both support their livelihoods and continue a craft integral to Khmer tradition and history.

“I think that a lot of people do not like this job because they think it is really boring—we work from early in the morning to late at night,” Mr. Sok Niet said. “But for me, I never think like that because this job is about taking care of our heritage.”

Mr. Channa, who made the journey from Banteay Meanchey in 1998 with his uncle that set Samnak on its present trajectory, agrees with the young apprentice.

“And I do it for one more important reason: I want to take care of my ancestors’ heritage so that it does not go missing in the future.”

And, just as his uncle taught him in 1993, he has begun passing on the basics of stonemasonry to two of his sons—his oldest has been carving for a few years already.

“I have tried to teach my sons to learn these skills because I think we are Angkorian, so we need to train the next generation.”