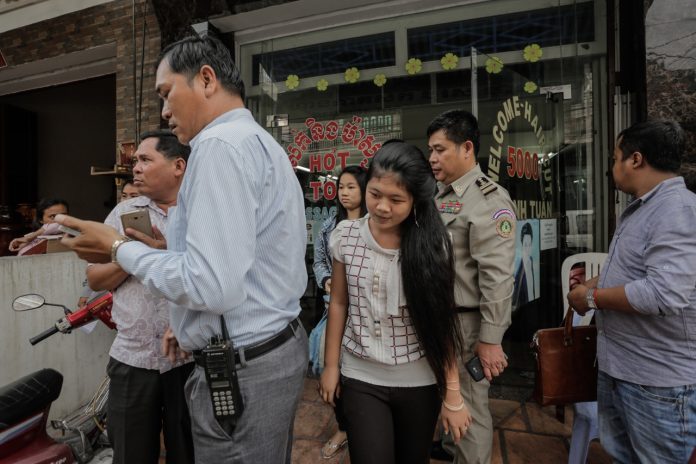 Ethnic Vietnamese residents of Phnom Penh on Tuesday voiced anger and frustration over the implementation of a nationwide census of foreigners that began in August, saying that police have been unfairly targeting their communities and businesses during inspections and raids.

In the latest census sweep, immigration police raided Vietnamese-owned businesses around the city on Monday and arrested six people who could not provide documents proving they were working in the country lawfully, as well as a 12-year-old girl who was held for several hours.

Chain-smoking at a table inside the cafe he owns in Tuol Kok district’s Phsar Doeum Kor commune, Kim Chanthy—who was born in Cambodia to Vietnamese parents—said immigration police grilled him on Monday even though he produced a card issued by the Interior Ministry indicating that his business had already been inspected.

“When I gave the yellow card to the police, they wanted to confiscate it, and I had to bargain with them before they would leave,” Mr. Chanthy said over the pounding of Vietnamese pop music in the background.

“They targeted me because my parents are Vietnamese; they wanted to push me in the car. The police use their power to abuse human rights. Based on the law, they can question the owner, but they cannot come in and treat me like this,” he said.

Seak Kheang, who moved to Cambodia from his native Vietnam in 1984 and owns a cafe across the street from Mr. Chanthy’s, said his visibly distressed 12-year-old daughter was ushered into a police van by officials after he was unable to immediately produce an original copy of her birth certificate.

“It is normal to check if people are here legally, but I was upset by how the immigration police reacted when I requested that they not arrest my daughter,” he said inside his cafe.

Mr. Kheang said that despite explaining to officials that his daughter’s birth certificate was at his home, they took her into custody at the municipal immigration police office, only releasing her when he produced the document later that day.

He said one of his Cambodia-born employees was also arrested after she failed to produce a birth certificate.

Mr. Kheang’s daughter said that after she was released, she remained shaken by her arrest, despite her father’s reassurances that the family had the necessary documentation for residency.

“When police arrested me and pushed me in the car, I felt afraid and was crying a lot. When they came here [the cafe], I was sleeping and I didn’t have the documents,” she said.

Uch Sothearath, deputy municipal police chief in charge of immigration, confirmed that the 12-year-old girl was arrested because her father could not produce a valid birth certificate.

“Once the original document was produced, we allowed her to leave,” he said.

The inspections of the two cafes on Monday came as a convoy of immigration police SUVs wove through the streets of the capital, stopping at mostly Vietnamese-owned businesses.

At about 10 a.m., some 20 officers, some of them armed, had gathered inside the Vietnamese-owned Em Minh cafe in Sen Sok district, inspecting employees’ documents while officials from the Interior Ministry’s immigration department circled the group, snapping photos and shooting video. After a brief argument with an officer, one of the female workers was ushered into a van that quickly disappeared down the dusty street toward the department’s headquarters.

After a lunch break, the convoy descended on the Phsar Doem Kor neighborhood, which is home to a large number of ethnic Vietnamese. Officers went door-to-door, demanding documentation from anxious-looking workers. Three women were hurried into police vans after failing to produce passports at the Tiem Hot Toc Nam Thanh Tuan hair salon and massage parlor.

Monday’s raids were set to be among the last in the nearly six-month census that has seen 1,253 foreign nationals deported, 1,008 of them Vietnamese, according to Uk Heisela, the chief of investigations at the immigration department.

Contacted Tuesday, however, Major General Heisela denied that Vietnamese were being targeted by census-takers.

“We do not focus just on Vietnam, we look at all nationalities, but the majority of immigrants in Cambodia are from Vietnam,” he said, adding that Vietnamese migrants found to be working illegally on travel visas have been treated leniently and have not been deported if they return to Vietnam to apply for work visas.

Maj. Gen. Heisela said the census suggests that the number of ethnic Vietnamese living in Cambodia is lower than he initially expected. He also dismissed claims made by the CNRP that the number could be far higher.

The opposition party and its leaders have made a major issue out of what they claim is mass Vietnamese immigration that goes unchecked by the government.

“We have done the census well; it’s not the same as how the opposition talk about it,” he said. “We expected about 300,000 at least, but only found about 200,000. [The CNRP] says in the newspapers that there are about 1 million, but we didn’t find them.”