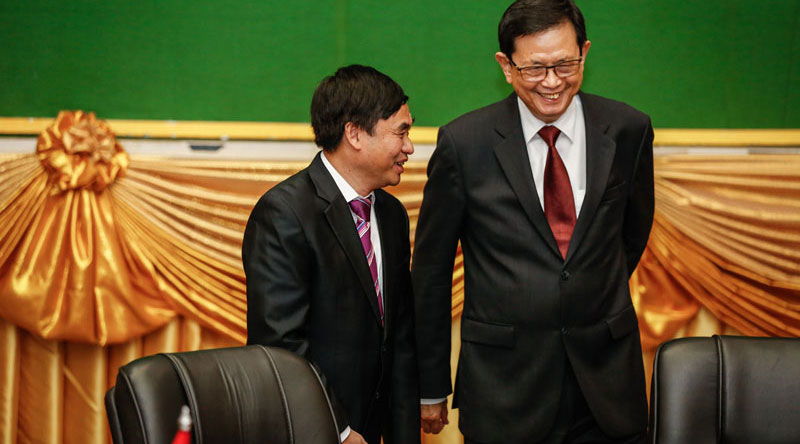 The Ministry of Foreign Affairs issued a statement Friday laying out Hanoi’s responses to three diplomatic missives sent by Phnom Penh in recent weeks regarding alleged border incursions, with Vietnam appearing to cede to a series of demands.

The statement comes after a three-day meeting this week of the Joint Border Committee, co-chaired by Var Kimhong, Cambodia’s minister in charge of border affairs, and Ho Xuan Son, Vietnam’s deputy foreign minister.
Following each day of the talks, which wrapped up with a signing ceremony Thursday, the delegations offered no details on what was discussed.

The Foreign Affairs Ministry statement, however, gives Vietnam’s response to three separate complaints from Cambodia regarding border violations in the provinces of Ratanakkiri, Kandal and Svay Rieng.

Responding to Cambodia’s complaint about eight large ponds dug near Vietnamese plantations on the border of Ratanakkiri, Vietnam agreed to fill in three of the ponds and send a joint technical working group to inspect the other five, according to the statement.

Ro Phalrith, chief of administration in Svay Rieng, said provincial governor Chieng Am sent a letter on Friday morning to the governor of Vietnam’s neighboring Long An province regarding road building near the border.

Deputy Ratanakkiri governor Ly Vin said he was aware of the diplomatic agreements but “has not received advice from the government” on how to proceed.

“The current situation is that Vietnam has no activities,” in the area where the ponds were dug, he said.

Kandal governor Mao Phirun could not be reached for comment.

Um Sam An, a CNRP lawmaker who has helped lead an opposition campaign to spotlight areas in which Vietnam is violating its border with Cambodia, said he welcomed the commitments announced on Friday.

“We will monitor to see whether Vietnam follows their promise,” Mr. Sam An said. “We will give them two weeks or a month, if they don’t, the best choice is to file a complaint with the ICJ [International Court of Justice].”