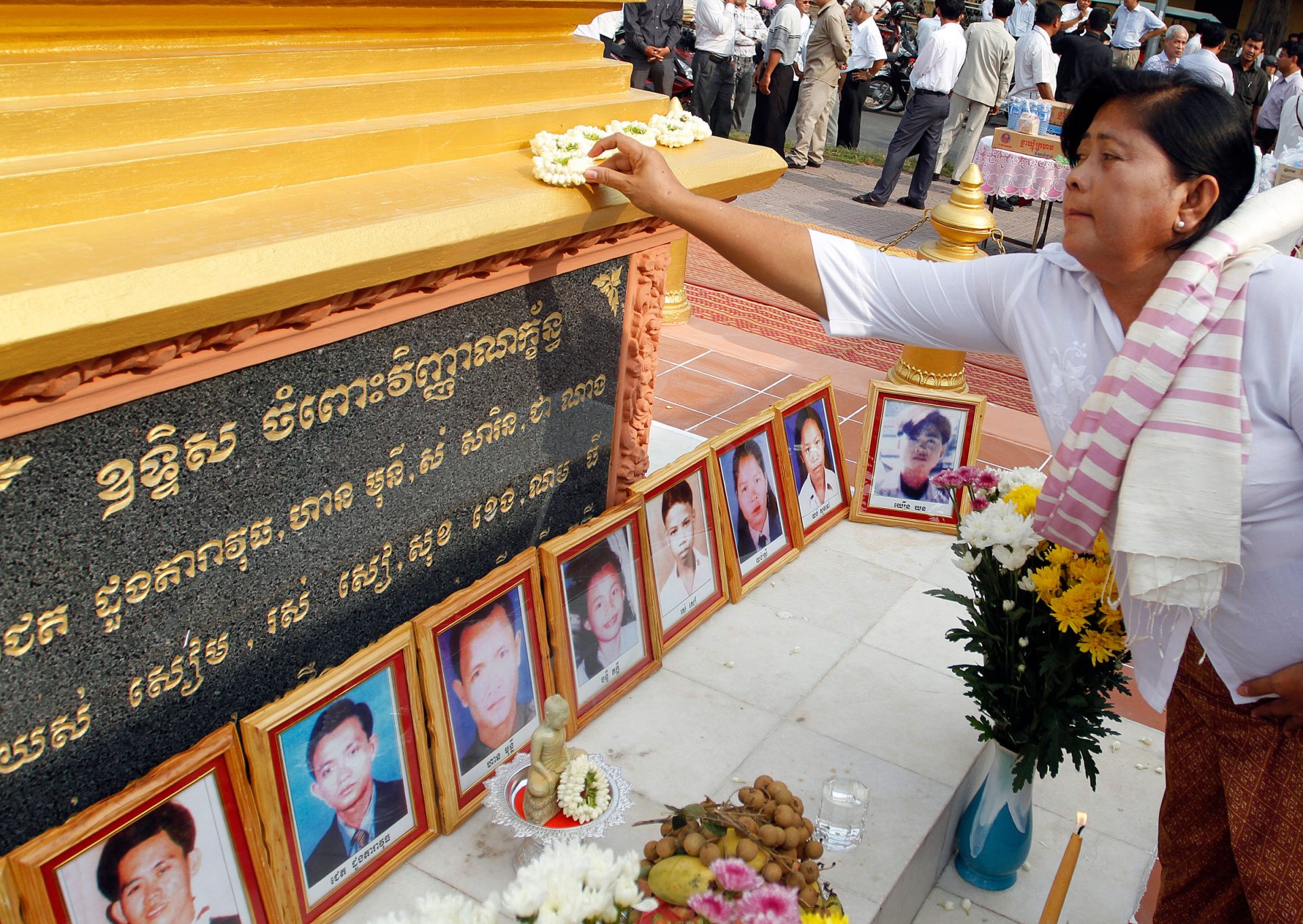 It was exactly 16 years ago Saturday that a group of unidentified men lobbed four grenades into the middle of a pro-democracy rally at Phnom Penh’s Wat Botum Park in a brutal attack that killed 16 men, women and children, and injured at least 100 more.

Im Malen, who joined about 200 fellow victims, relatives of the dead and opposition supporters outside the former National As­sembly building to mark that bloody morning in 1997 and call for justice in a case that has never been solved, remembered the carnage as though it were yesterday.

Ms. Malen, now 71, caught several pieces of shrapnel in her back that day. Instantly paralyzed from the waist down, she has not walked a day since. Her bare feet twisted permanently out of shape, she had dressed up for Saturday’s memorial in all white and sat through the ceremony in a rudimentary wheelchair. Sixteen portraits, one for each of the dead, lined a memorial stupa at the scene of the massacre.

“I was holding up a banner while [opposition party] president Sam Rainsy was starting to talk, then there was the sound of a bomb ex­ploding, like ‘Boom!’ and then a few more and I was knocked down. There was blood everywhere. The blood was running from my son’s face,” she recalled after the service. A piece of shrapnel had also shorn the index finger on the right hand of her other son clean off.

Knocked to the ground, Ms. Malen recalled, she felt little pain at the time. But when she tried to stand up, she could not get to her feet.

Like the others at Saturday’s anniversary, she wanted those be­hind the attack brought to justice. And like everyone else there, she blamed the ruling CPP.

“I am old, over 70, and I’m afraid I will die before I see justice,” she said. “I want to find the people who ordered the murderers to throw the grenades at us. I want them to be punished.”

Efforts to do just that have come and gone.

Mr. Rainsy, who blames Prime Minister Hun Sen for the attack and filed a lawsuit against the prime minister with the Phnom Penh Municipal Court, saw his case dropped in 2005.

Later on, Mr. Rainsy himself had a related lawsuit he filed against the prime minister in the U.S. suspended so that the government would drop its case against him and let the self-exiled opposition leader return to Cambodia in time to stand in the 2008 national elections.

The FBI closed its own investigation into the attack, prompted by the injury of a U.S. citizen, before coming out with any conclusions in 2005.

However, before it closed the case, the FBI was pointing a heavy finger at the CPP.

According to FBI files since declassified, witnesses to the attack reported seeing two of the possible assailants immediately after the blasts flee toward a military compound behind Wat Botum where a cordon of government troops stepped aside to let them through.

Hing Yoeun, now an adviser to SRP president Kong Koam, says he saw it with his own eyes.

“When it [the first grenade] exploded there was a lot of white smoke; I thought it was tear gas,” he recalled Saturday, after the ceremony. When he looked up, he saw two men running toward the line of troops.

“The suspects passed through the soldiers and then they [the soldiers] stopped [Sam Rainsy’s] bodyguards,” who had given chase, he said.

“I ran into the crowd to get the in­jured people. Some of the people had their hands blown off, some people were crying. One woman had lost both her legs and I carried her to the party headquarters,” which at the time was about a block away, he said. “When I took her off [my back], she was dead.”

Speaking to the crowd from France via video-link, Mr. Rainsy promised to press the case through the local courts again if his new party, the Cambodian Na­tional Rescue Party, won this year’s elections.

For its part, the government says its own investigation into the attack is still open—but going nowhere.

Peou Heng, 66, who lost a daughter and a niece in the attack, was not surprised.

“It’s been 16 years and I am still waiting for justice,” she said. “If they wanted to find justice for us, they would have found it already, but they don’t.”