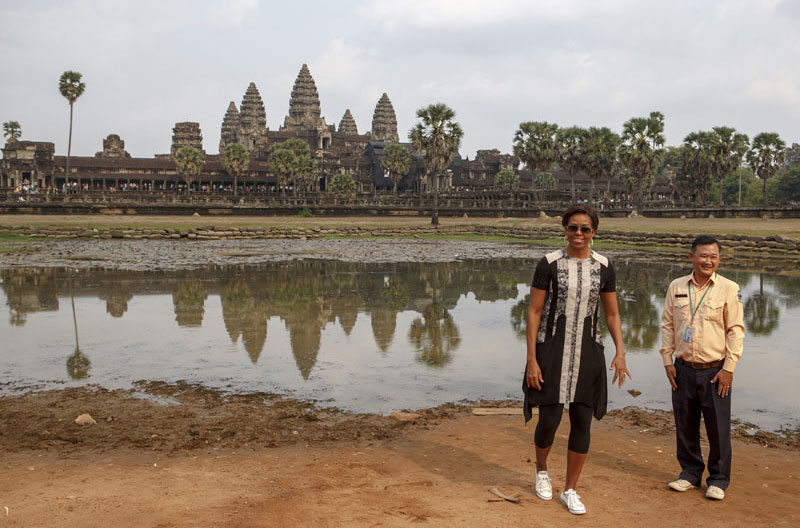 SIEM REAP CITY – U.S. first lady Michelle Obama left Cambodia on Sunday following the first-ever visit to the country by the wife of a sitting U.S. president, during which she called for greater freedom and equality in education and for the empowerment of young women.

The wife of U.S. President Barack Obama jetted into Siem Reap International Airport on Friday night from Japan as part of a five-day visit to Asia to promote the launch of the U.S.-led education initiative Let Girls Learn. The community-based mentorship program aims to prolong the education of adolescent girls in Cambodia and 10 other countries and will reach an estimated 62 million students.

In the run-up to her arrival, speculation focused on whether Ms. Obama would confront Cambodia’s woeful human rights record, or mention recent electoral reforms that have been blasted by critics including U.S. Ambassador William Todd.

In the end, Ms. Obama performed a careful balancing act, addressing injustice and inequality by emphasizing the power of education to overcome them, and managing to appease critics of the government without alienating her host for the weekend, Prime Minister Hun Sen’s wife, Bun Rany.

“When girls get educated and when they learn to read and write and think, that gives them the tools to speak up and to talk about injustice and demand equal treatment. It helps them participate in the political life of their country and hold their leaders accountable,” Ms. Obama told a room full of civil society leaders, dignitaries and Peace Corps volunteers during her keynote speech on Saturday at the Hotel Sofitel Angkor Phokeethra.

The first lady had a busy Saturday schedule that began with a visit alongside Ms. Rany to a high school, where she spoke to students taking part in the Room to Read initiative, also spearheaded by the U.S.

Ms. Obama shared her own reflections of the visit in an online travel journal, recounting stories shared by two of the students she met, Sohang Vean and Lorn Phounam.

“I had the pleasure of meeting with these girls, and they were absolutely amazing—so passionate about their education and so determined to pursue their dreams,” she wrote.

It was close to midday when the first lady returned to Sofitel to give her speech, addressing the volunteers who will implement the Let Girls Learn programs along with young community leaders and grassroots activists.

The majority of media who traveled to Siem Reap to cover Ms. Obama’s visit were left disappointed to be confined at the Sofitel as the U.S. Embassy cherry-picked a batch of reporters to join the first lady’s motorcade, which left for a sightseeing tour of Angkor Wat in the early afternoon.

“Owing to limited space in the motor pool we are obliged to select a combination of outlets that best helps us to convey the message of the First Lady’s visit to the widest possible audience,” Mr. Raman said in an email. “Unfortunately we were not able to accommodate everyone.”

While the first lady did not tackle any sensitive issues head-on, she used her speech to explain how education could empower people to actively oppose inequality and injustice. Ms. Obama also described how she herself overcame the odds through hard work and determination, a theme that clearly resonated with her audience.

Por Laihieng, a 27-year-old teacher from Kompong Thom province who has taught Khmer to Peace Corps volunteers for the past four years, said she was happy that the first lady kept a sharp focus on the importance of education for girls.

“There are more and more girls in education, but when they get to high school, they are pressured by their families to drop out to support older brothers or sisters to go university—this is not a good situation for Cambodian females,” she said.

Ms. Obama, often referred to as FLOTUS (First Lady of the United States), said enough in her speech to satisfy Phil Robertson, the deputy Asia director of Human Rights Watch, who took to Twitter to ask Mr. Obama to follow through on his wife’s groundwork.

“Good! @FLOTUS raised rights issues in #Cambodia, now time to get husband @BarackObama to follow up w/benchmarks,” he wrote.

But more than 100 housing rights activists from various communities who gathered outside the U.S. Embassy on Saturday morning had hoped for a more direct approach to secure the freedom of 10 women activists jailed on protest-related charges last year.

“We believed that she would raise this issue with the Cambodian government since we have heard that she was raising issues about women’s rights,” said Bov Sorphea, a representative of the eviction-hit Boeng Kak community. “She could have used this opportunity to promote women’s rights in Cambodia.”

Before she departed, Ms. Obama said in her speech at Sofitel that she hoped her message, and the Let Girls Learn initiative, would lay an enduring foundation for girls in the country.

“All of you are doing the hard work of change and you should be proud of yourselves,” she said. “So keep it up…. Promise?”