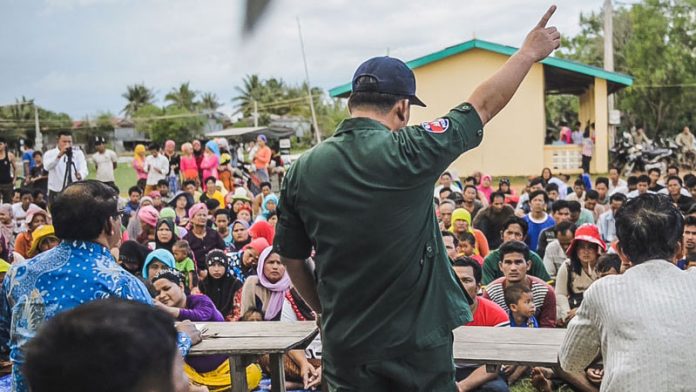 TROEUY KOH COMMUNE, Kampot City – Police say they have asked Vietnam to identify the Vietnamese trawler involved in a fatal clash last week with Cambodian fishermen, reversing their position that the death of a local man was an accident.

On July 28, deputy provincial police chief Mao Chanmathurith said that Ey Youb, 42, was killed by the impact of hitting the water after a collision between two feuding boats sent him flying overboard the night before, sparking accusations of a coverup from local fishermen.

On Tuesday, however, Mr. Chanmathurith conceded that the dead man had been assaulted, as Ey Youb’s crewmate and cousin Nos Youb had initially reported.

“I have seen a photo of the victim’s body and it appears that he was attacked. I have asked Vietnamese authorities to search for the boat for us,” Mr. Chanmathurith said Tuesday. “Now we can’t do anything more than wait for the Vietnamese side. Also, we have not identified who is involved.”

Mr. Youb told of a ruthless assault on his crewmate, during which the Vietnamese fishermen pulled him from the ocean and then bashed him with steel poles before throwing him back overboard and radioing for other Cambodians to come and pick up his dead body. After the Cambodians warned that their navy would soon be arriving, he recalled, the Vietnamese replied: “If the navy is coming, we will know before you.”

Mr. Youb said the attack had left his cousin with holes in his chest, a cavedin face and a smashed Adam’s apple. However, photos of the body seen by a reporter suggest his claims were exaggerated.

The death has drawn attention to an ongoing maritime feud between Kampot fishing communities and invading Vietnamese crews who use giant, paired trawlers to scoop up huge quantities of sea life from the ocean and destroy the habitat in the process.

Cambodian fishermen say that authorities have for years ignored reports of Vietnamese encroachment. Provincial governor Kuoy Khun Hour said last week that the two nations had agreed to share the sea and that the trawlers—two boats dragging between them nets hundreds of meters long—were not illegal in Vietnam and so would not be treated as such in Kampot, though the practice is outlawed under Cambodia’s Fisheries Law.

On Saturday, during a visit to Troeuy Koh commune, Kampot City governor Neak Sovannary said the agreement was still in place.

“We follow our fishing law and they follow their law. When we have some problems, we have to forgive each other,” he told a crowd of some 250 members of the local Cham Muslim community who had gathered outside their mosque.

With the deputy chief of the navy’s water border battalion, Touch Poleak, by his side, Mr. Sovannary went on to chastise the fishing community for its vigilantism against the illegal Vietnamese fishermen.

“I myself don’t know where the border is, so how do you know?” he said. “You cannot go and crack down on them, it’s illegal. If you commit the crime, you will face the law.”

As the crowd began to hurl insults, coming to believe that the visit was more about silencing than appeasing them, Brigadier General Poleak took over and insisted that authorities were acting in the interests of the Cambodian seamen.

“When you see Vietnamese fishermen, report it to police,” he said. “Use your compass and report to us right away.”

“We will find the people who [fish illegally] but don’t think it’s up to you to do so,” he added.

With this, many in the crowd, mostly women, walked off in frustration. “We don’t believe you,” they cried. “We don’t want to listen to you anymore.”

“If you don’t believe, it’s up to you,” Brig. Gen. Poleak retorted as community leader Neak Sen attempted to calm the crowd. To jeers, the general claimed that he had solved “100 cases in the past year,” before walking back to his SUV.

Contacted by telephone Tuesday, Mr. Sen, the community leader, said that despite feeling hopeless in their battle with the encroaching Vietnamese trawlers, his community would continue to agitate for someone to be held responsible for the death of Ey Youb.

“We have little hope that police or authorities will help us find justice or stop those Vietnamese trawlers. They could have [stopped them] a long time ago, so why would they now?” he said.

“If our community does not stand strong, I think they will stay quiet and do nothing.”