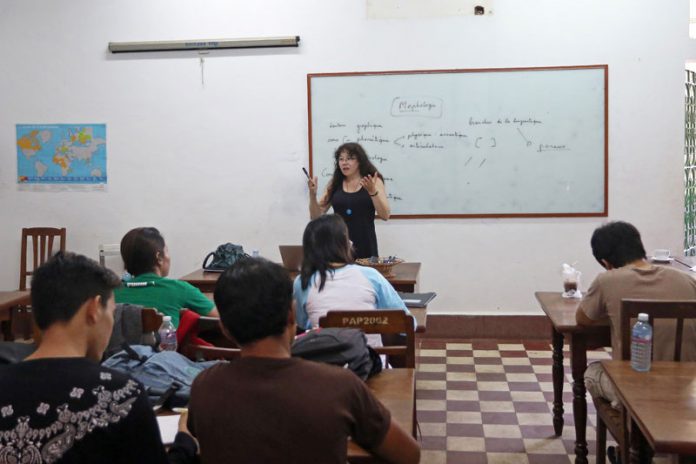 The goals of Project Manusastra were bold from the start. Initiated by a French-Cambodian linguist, this university program aims to produce a new generation of Cambodian researchers capable of conducting independent research on the humanities, rather than merely supporting foreign scholars.

Launched in 2012, the program has required an uncommon commitment from both students and professors, and turned into a major exercise in foreign relations involving higher-education institutions on opposite sides of the globe.

And now, this joint project of Inalco—France’s institute of eastern languages and civilizations in Paris—and the Royal University of Fine Arts (RUFA) in Phnom Penh is about to see its first class of 20 Cambodian and Laotian students obtain their bachelor’s degrees. At the same time, it will launch its second phase, becoming the first program in the region to offer a master’s degree in the humanities recognized throughout Europe.

For Cambodia, the stakes are high, according to Culture Minister Phoeurng Sackona. Until now, most research in the humanities here has been conducted by foreign researchers with Cambodians assisting, she said.

“One does not become a researcher overnight,” said Inalco linguist Joseph Thach, the founder of Project Manusastra—a Sanskrit word meaning “human knowledge and sciences.” “One must be trained as a researcher, and then it turns into a passion.”

Norng Many, one of the Cambodian students about to graduate, has definitely caught the research fever during the three-year undergraduate program, she said. “The classes were quite difficult at first. But it got easier and now, I’m really interested in linguistics.” She has already submitted her application for the master’s program, whose classes will start in October.

Laotian student Mimy Keomanichand also hopes to do the master’s program. “I’m interested in anthropology especially, because in Laos, there is little research done on people and society…except by foreigners,” she said.

Project Manusastra has also been nicknamed “Universite des Moussons,” or Monsoon University, because classes for the bachelor’s degree program are held during school holidays in July, August and September.

Students must already be studying at the Royal University of Fine Arts or at a university in Laos to be accepted into the program, making this an additional degree recognized in their respective countries as well as in France and Europe through the European Credit Transfer System.

Obtaining it means students trade their holidays for intensive courses in French. Knowledge of French is crucial for researchers in archaeology or the humanities, as most research documents on Cambodia, Laos and Vietnam up to the 1960s were in French.

Teachers also must be willing to make time for the rainy-season university. This year, Eric Corre, a linguist and professor at Universite Paris 3, Sorbonne Nouvelle, cut short a trip to Jakarta to give a class. Linguist San San Hnin Tun, who teaches Burmese at Inalco in Paris, had to reschedule field research. So did Cambodian ethnologist and RUFA professor Ang Choulean, whose work has earned him international recognition.

Courses cover anthropology, linguistics, archaeology and history up to the 1860s, when Indochina was established by France.

The bachelor’s degree program, which took Mr. Thach four years to set up, was created in cooperation with several institutions including the National University of Laos, France’s Institute of Development Research, and the international association of French-language universities Agence universitaire de la Francophonie.

With the master’s program, the number of partners will expand to include three Thai universities as well as universities in Rangoon and Jakarta. For the first time, students from the region will come to Phnom Penh to obtain international degrees in the humanities recognized in the region as well as in France and Europe.

“What we’re attempting to do is that, by 2016, we will transfer courses of the ‘Monsoon University’ to RUFA because there will be [Cambodian] professors able in history, anthropology and even linguistics to take on courses now given by professors from outside the country,” Mr. Thach said.

Project Manusastra’s long-term goal reflects the fact that Cambodia has long been out of its post-conflict phase, and its major issues now resemble those of other developing countries. Unlike university graduates of past decades who obtained master’s degrees or doctorates abroad and were destined to work for public or private institutions to help rebuild the country, hopes are that students in Project Manusastra will pursue academic research, Mr. Thach said.

“The idea is to set up international research teams…with a partnership of equals: Cambodian researchers whose capacity is equal to that of foreign researchers truly conducting projects together,” Mr. Thach said. “This is how we can envision the development of education later on in Cambodia.”