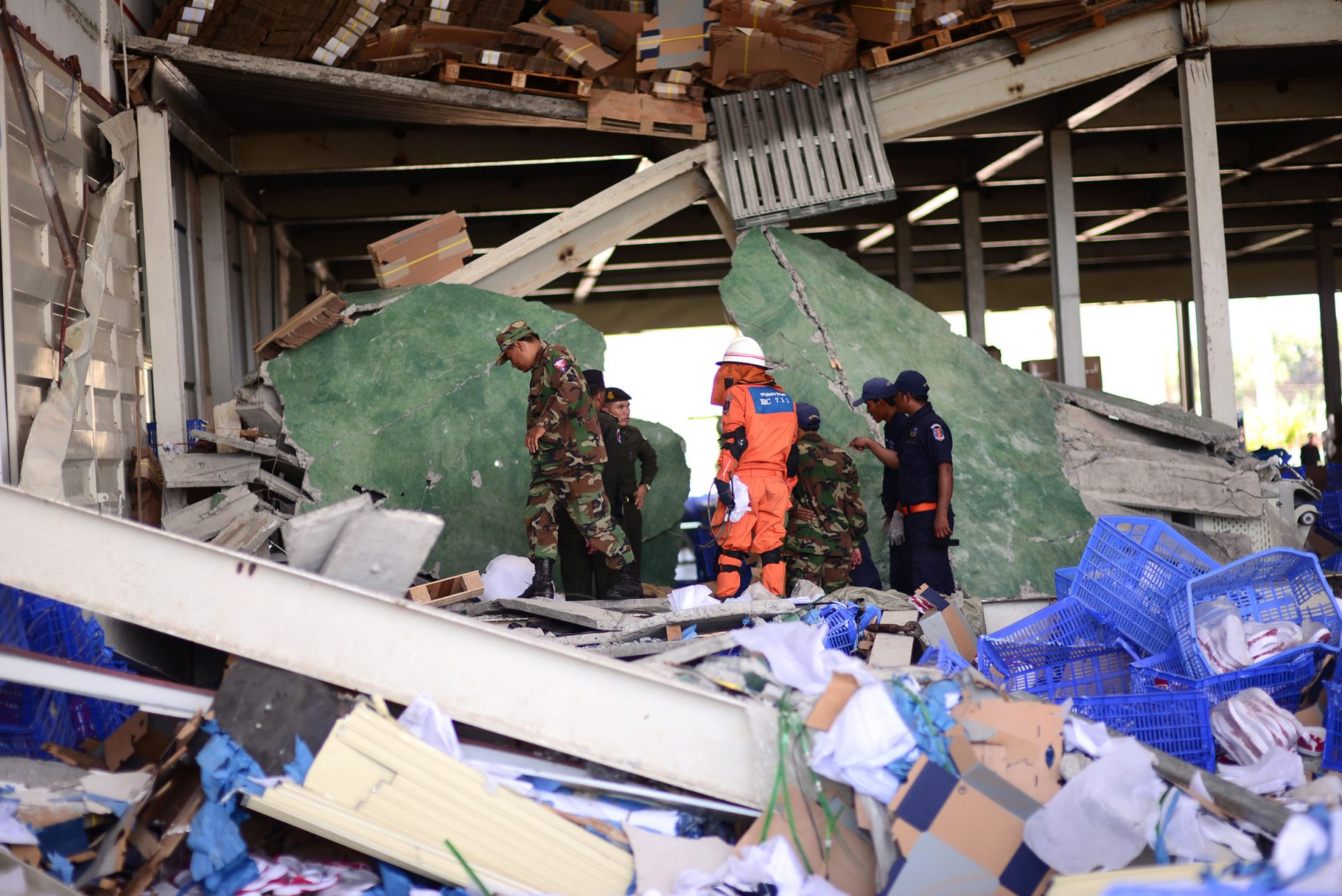 According to eyewitnesses, shortly after workers had begun their day at 7 a.m., an approximately 9-by-15 meter section of a cement ceiling at Wing Star Shoes Co. Ltd.—which produces running shoes for Japanese sports brand Asics—suddenly collapsed, crushing workers under steel and concrete.

The incident has raised concerns over safety standards at the some 400 factories nationwide producing footwear and garments, which account for about 80 percent of Cambodia’s total exports.

On Thursday, government officials promised to perform building safety inspections at all factories following the incident, which comes on the heels of a massive factory collapse in Bangladesh where more than 1,100 garment workers were killed.

The bodies of Sim Srey Touch, 22, and Rim Saroeun, 22, were pulled from the rubble soon after the collapse, while district police chief Kim Sophannara said nine injured workers were taken to Calmette Hospital while two others were treated for minor injuries at the district health center.

The deceased were taken to their homes near the massive factory, which looms large in Maha Russei and Prey Vihear communes beside National Road 3, an otherwise rural borderland between Kompong Speu and Takeo provinces.

After the body of his nephew, Rim Saroeun, was brought home and placed in a coffin beneath their modest wooden home in Takeo province’s Bati district on Thursday, Rim Rorn, 29, who also works at Wing Star Shoes, told of the collapse, that he witnessed from an adjacent room in the factory.

“There was no warning sound,” he said. “It just collapsed, and I ran out to look for my nephew. I couldn’t see anyone, it was just a pile of concrete and steel.”

Mr. Rorn and his fellow workers immediately began digging through the rubble with their bare hands, he said. “I saw one woman and one man, they were both dead and close to each other. The man was my nephew,” he said.

Rim Saroeun’s young wife, Nuon Chor Vy, 21, said she had given birth to his child just a month ago. “He’s dead, now nobody can support my family,” she said.

In Prey Vihear commune, family and friends of Sim Srey Touch, many wearing the factory’s branded polo shirts, gathered around her cut and bruised body, covered with a thin white sheet.

The deceased’s mother, Nou Nget, 41, said her young-looking daughter, who she insisted was 22 and still taking grade 9 classes at a nearby high school in her free time, had only begun her work gluing the soles on running shoes at Wing Star Shoes two weeks ago.

“I felt like fainting, and I almost had a heart attack,” she said on hearing the news of her daughter’s tragic death.

Two of Ms. Nget’s remaining five children work at the same factory, which—paying a steady wage of $80 per month—is the sole source of reliable employment in the immediate area. “I will always be worried if they return to the factory,” she said.

Company representatives have given each family $1,000 to pay for the funerals but have not discussed further compensation payouts for the dead and injured. Those families were also visited by politicians bearing donations, including Prime Minister Hun Sen’s son, Hun Many, who is running for a Kompong Speu province seat in the National Assembly at July’s national election.

Peter Li, country director at NGO Side by Side, which assists and trains the government’s 119 emergency response workers, said the first responders on the scene were local ambulances, followed by members of the Brigade 70 military unit.

Rescue workers and military personnel, using an excavator, picked through the rubble, at one point finding a severed leg and a large amount of blood, which led to increased efforts to find a suspected third victim still buried beneath the debris.

“We just wanted to make sure that there was nobody under there,” Mr. Li said, adding that the severed limb turned out to belong to Rim Saroeun, one of the two crushed workers.

Amid the broken concrete, shoe parts, shoe boxes, loose plastic a precarious steel structure was twisted out of shape where the thin concrete ceiling had fallen away.

Mr. Li said he had been concerned for rescuers since the structure appeared to have been very poorly built. “Structurally, that place is Lego blocks,” he said, explaining that only welding had been used to secure steel-framed columns to one another.

“I hope they don’t let people in again. They need to get an engineering team in. It’s a huge building and it is going to collapse again,” he said.

Morm Narey, chief of the Kompong Speu provincial department of land management, urban planning and construction, said that the section that had collapsed in the factory was part of an unapproved expansion the company had built connecting two factory buildings.

“Only the additional building they built without permission collapsed,” he said. “They built it technically wrong and then put heavy stuff on it.”

Social Affairs Minister Ith Sam Heng said that a nationwide review of the safety of factories would be conducted.

“We will have a committee investigate clearly on this case and we will take legal action against anyone involved,” he said. “Secondly, the Ministry of Social Affairs and other involved ministries will inspect the building of all factories in use [in Cambodia].”

Katsumi Funakoshi, general manager at the Japan-based Asics Corporation, said the company was investigating to find out what had happened.

“We hope to send people there to make sure all the information is true. This factory is a subsidiary of our subcontracting factory. Before today, nobody from Asics knew about it. It’s not our direct factory.”

Tea Sokleng, an emergency room doctor at Calmette Hospital, said the hospital had treated nine people, one man and eight women, who were injured in the collapse but were all in non-critical condition.

“One woman was seriously injured. She lost her big toe and second toe on her left foot. It was crushed from the steel and concrete,” he said.

Ly Hour, a representative of Wing Star Shoes, visited the injured in hospital, doling out a total of $1,500 each in compensation. “It was the carelessness of the construction workers. I do not know exactly what happened as I’m not an expert,” she said.

“After this incident, the company owner will reconsider the whole building to make sure it is safe to work in.”

One of the injured at Calmette, Hem Navy, 35—who had a broken foot, some internal bleeding and bruising—said that earlier this week she had heard a loud, sharp sound coming from the building.

“We heard it but we did not see any cracks in the building so we did not dare tell the manager,” Ms. Navy said.