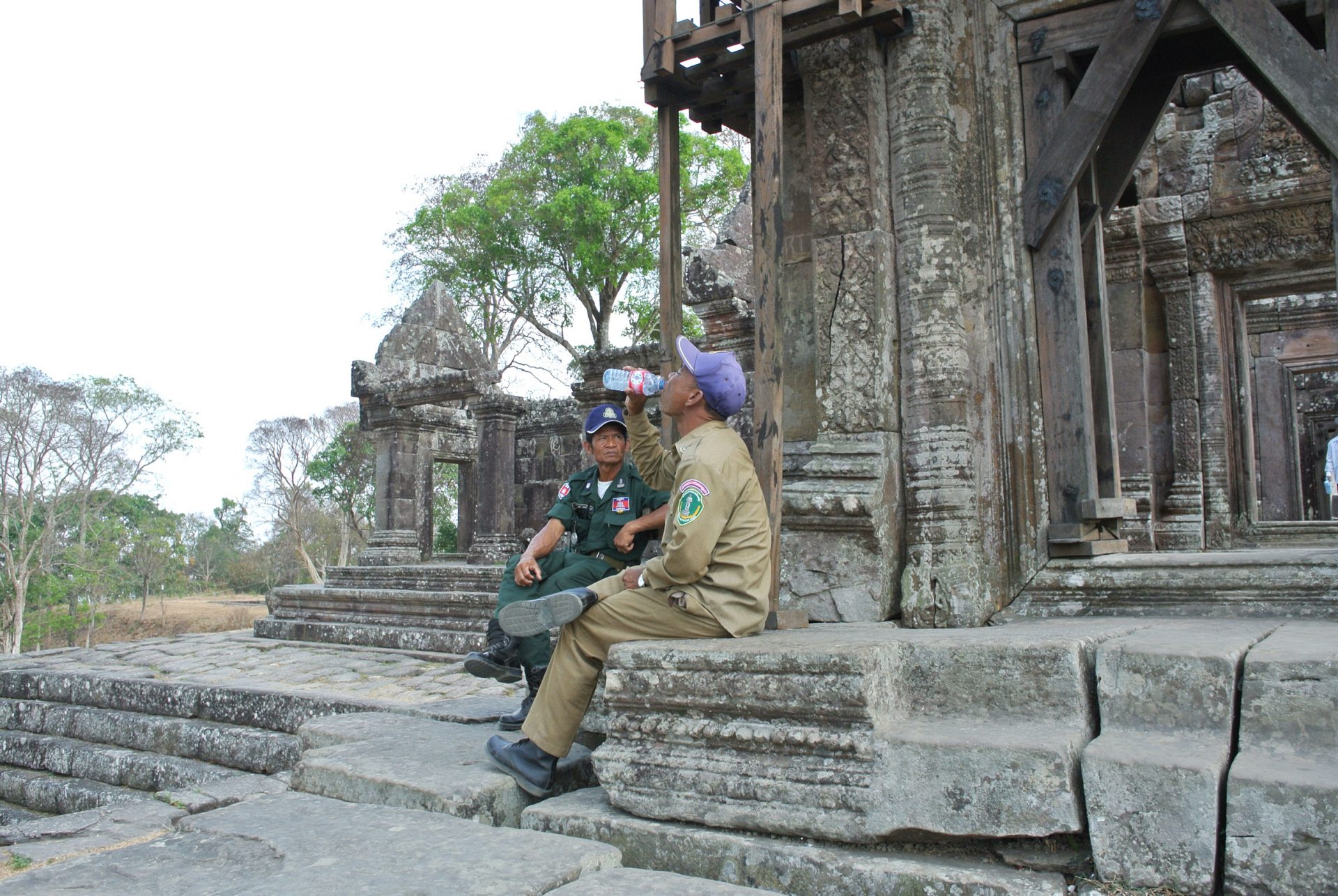 PREAH VIHEAR TEMPLE – Several fierce battles have been fought with Thailand at this ancient temple in recent years, but last week it was an energetic game of volleyball that kept Cambodian troops on their toes as groups of tourists wandered unconcerned around the 11th-century ruins.

Despite saber-rattling stories in the Thai press and a recent warning by Prime Minister Hun Sen that Thailand planned to attack if the International Court of Justice (ICJ) rules that land around Preah Vihear belongs to Cambodia, volleyball and water were the two main concerns among troops at the temple.

A number of soldiers approached by reporters said they were under strict orders not to talk to the media. But rather than staying quiet to keep the enemy in the dark about military matters, they said they were gagged after a recent radio report quoted Cambodian soldiers complaining about the lack of water at the temple.

“The commander was angry after that,” said a soldier who declined to be named.

Far into the dry season, with only a few centimeters of water remaining in wells, and the ancient ponds of the mountaintop temple almost dry, water appeared to be the troops’ most pressing concern.

One soldier, Morn Phat, said that drinking water was being brought up the mountain.

“The water [to drink] is enough, but we have some trouble with water for bathing,” he said. “It’s normal for this season.”

Another, Touch Rathana, said all had been quiet on both the Cambodian and Thai sides of the frontline since July, when the countries held an official withdrawal of troops from an ICJ-proposed demilitarized zone (DMZ) around the temple.

Combat troops were withdrawn on both sides, and Cambodia has kept only conservation rangers and police at the temple since, Mr. Rathana said.

However, troops in army fatigues sat in sandbag bunkers on the steep road up to the mountaintop, which is still within the DMZ. Around the Hindu temple, only police and the Preah Vihear Authority’s rangers, armed only with pistols, were seen on patrol. The heavy weaponry previously stationed near the temple has been removed and there has been no fighting in the area for almost two years.

Around the ancient stones of Preah Vihear, on four ornate tiers separated by steps and long causeways, a handful of tourists strolled peacefully, occasionally crouching behind the sculptures for shade.

Eur Say Lang, 57, a rice farmer from Banteay Meanchey province’s Svay Chek district, said she had come to visit with a group of 17 people.

“But I feel a bit disappointed because it is ruined because of the war,” Ms. Say Lang said, peering sadly at the iconic lower pavilion, which is in a rundown state of repair.

“It must have been beautiful, if it wasn’t ruined by the Thai shells,” Ms. Say Lang said of the iconic stone portico, familiar to all from advertisements and beer labels.

Though the damage Ms. Say Lang spoke of was not inflicted by Thai artillery, but just hundreds of years of neglect and the harsh tropical climate, she thanked the Cambodian army for saving what was left.

“I’m really afraid that they [Thailand] will shell more and ruin everything. I’m happy the army is here to protect it.”

Ms. Say Lang carried with her a $1.25 photograph of herself in front of the temple, taken by one of the young men who make their living with digital cameras and battery powered laser printers.

According to figures from the provincial tourism department, visitors to Preah Vihear temple reached 92,300 in 2012, an increase of more than 75 percent compared to 2011.

“The security issue is under control. Our authorities have strengthened security, public order and hygiene for tourists to the temple,” he said.

Of the visitors in 2012, 7,141 were foreign nationals, almost two-and-a-half times the amount recorded in 2011, according to the figures.

“Most of the [foreign] visitors are from Europe, including Italy and France, as well as Asia, including Vietnam, China and Japan,” Mr. Vibol said, adding that the growth in tourism at the temple looked to be continuing this year, with more than 9,500 visitors seen in February alone.

Russian visitor Oleg Malin, 35, said the temple compared in beauty to Angkor Wat, but had an added element of excitement.

“I had some concerns. I was not advised [to visit],” he said, indicating that the modicum of danger associated with Preah Vihear was just his cup of tea.

Mr. Malin gestured at his two Russian companions: “I have some very adventurous friends.”