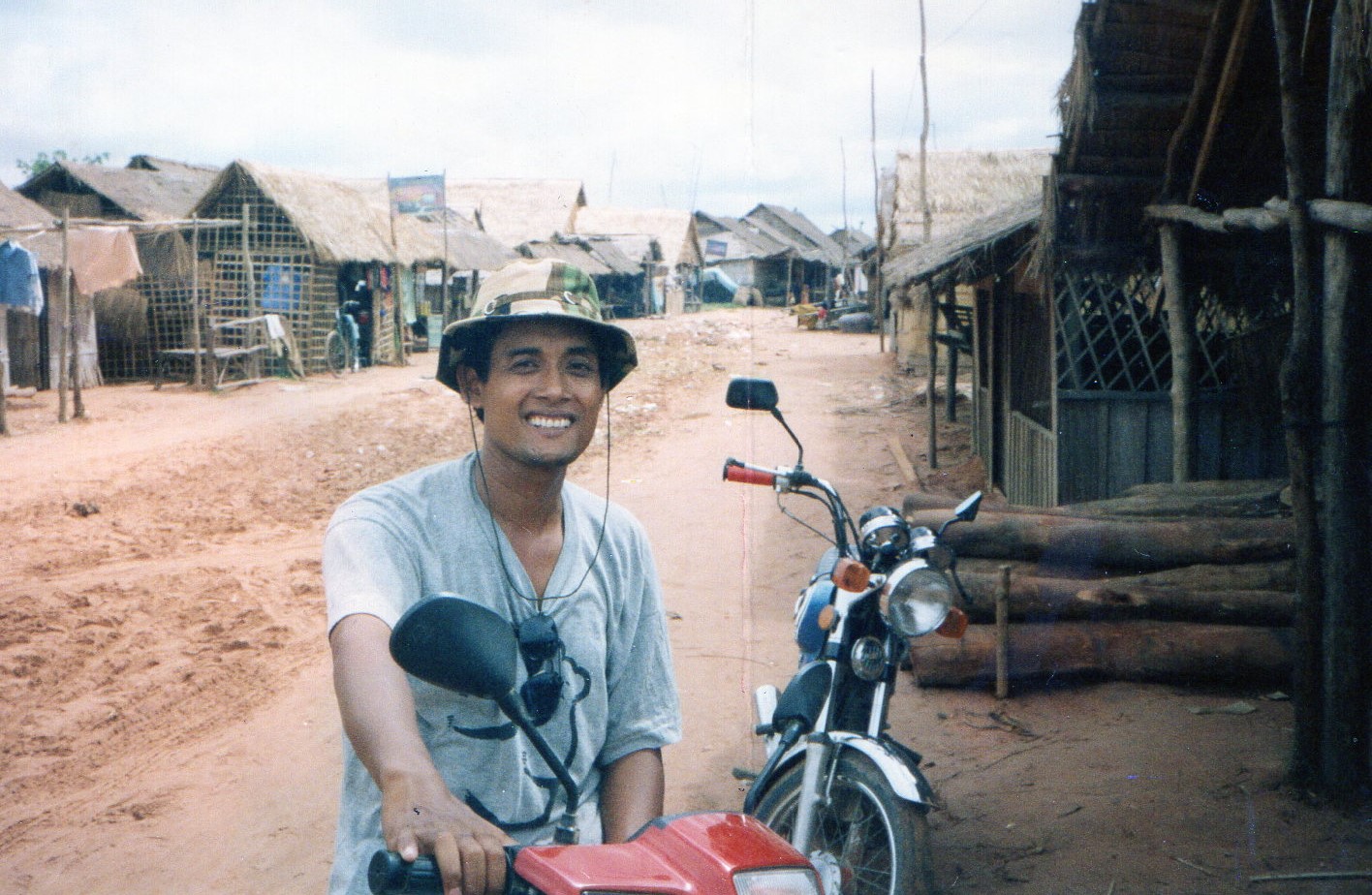 Political analyst Meas Nee watches his words and his company.

“Even that group at that table,” he said at a Phnom Penh restaurant last week, gesturing at a trio of men sipping coffees. “They look at me a lot.”

The man who might best understand his fears is dead.

For years, Kem Ley, a fellow social scientist and political analyst, traded notes with his colleague on their work in the provinces. Poor Cambodian farmers had been handed the short end of the stick for centuries, but they saw signs of change. People were beginning to ask questions.

On July 8, the two friends participated in a Radio Free Asia (RFA) panel discussion on a recently released report from the NGO Global Witness that documented the vast business holdings of Prime Minister Hun Sen’s family. Kem Ley was upset that the government wasn’t investigating how the first family had amassed such wealth.

Less than 48 hours later, Kem Ley was shot dead at the Caltex gas station where the pair often had coffee. The suspected shooter, a former soldier, claimed to have pulled the trigger over an unpaid $3,000 debt. A skeptical public cast furtive glances farther up the food chain.

Mr. Nee avoided the funeral planning and public appearances. The 58-year-old analyst was spooked even before Prime Minister Hun Sen warned him earlier this month in a graduation speech “not to go too far” after he dared to say that a CPP legislative maneuver banning the CNRP from summoning ministers was unconstitutional.

On Monday, the prime minister slapped political commentator Kim Sok, also a regular guest on RFA, with a $500,000 criminal complaint for seeming to suggest that the CPP killed Kem Ley.

In a speech ranting against the analyst, he also told would-be revolutionaries to “prepare the coffin.”

“I don’t think that the warning that the prime minister has done on me has a high risk, because we can see his tone or whatever,” he said. “What I’m scared most…[is] the third party somewhere, just tries to create more suspicion between the two parties, and they kill me.”

Guns first entered Mr. Nee’s life in the late 1960s, in a village in Svay Rieng province where he grew up. The Vietnamese border 10 km away had become porous as the Second Indochina War raged next door. Vietcong soldiers hid in the village while convoys carrying Chinese armaments snaked through its bamboo trees.

He would learn soon enough, as the country tumbled into civil war and the Khmer Rouge swept to power in 1975. Mr. Nee was one of the first Cambodians to write about the brutality that followed in his 1995 book “Towards Restoring Life in Cambodian Villages.”

Describing the Khmer Rouge youth camp where he was assigned to dig a canal, he wrote: “I wait for my turn to work, I wait for my time to be taken and killed, just as an animal does.”

“I think only of what I can find to eat,” he wrote. “Many who are working beside me die or are killed.”

One of those people was his father, according to Joan Healy, an Australian Catholic nun who met Mr. Nee a decade later while volunteering in a Thai refugee camp.

Meas Nee on a trip to the provinces, in a photograph posted to his Facebook page

“His father was starved to death really in front of his family,” she said. The primary school teacher left his son with a mandate: “His father had said to him that people will need a lot of healing when this is over.”

The Vietnamese army booted the regime from power in 1979. Two years later, with Vietnam occupying the country and attempting to impose a new communist order, Mr. Nee disguised himself as a farmer and walked to the Thai border refugee camps, which he heard offered free medical training.

Site Two, the camp where he spent the bulk of those years, had 180,000 residents suspended in purgatory, totally dependent on the camp’s foreign donors and aid workers. It was like “living under the edge of the roof of someone else’s house,” Mr. Nee wrote in his 1995 book, the first of four he would eventually write.

When the camp was shelled, foreign aid workers were whisked to safety. The Cambodian refugees took the hits.

“I ask myself why I felt these degradations even more than in Pol Pot times, and realize that at this time I was emerging from the numbness and beginning to feel,” he wrote.

He and so many others. Researchers from the Harvard Program in Refugee Trauma say they uncovered “extraordinary trauma and mental health distress of camp residents that were almost completely denied or neglected by the UN and international humanitarian relief agencies running these camps.”

Mr. Nee coped by keeping busy. Healing others “was like putting an oxygen mask over my mouth and nose. I needed this to live,” he wrote.

The camps were his unlikely school of medicine. He first found work as an army medic for the Khmer People’s National Liberation Front, one of three political and military groups that formed the resistance against the Phnom Penh government, before rising through the ranks of civilian hospitals and setting up the camp’s first mental health clinic.

Mr. Nee denied any political sympathies with the resistance at the time.

When Ms. Healy met Mr. Nee in 1989, the medic was so gaunt that Ms. Healy thought he had tuberculosis. It turned out he gave half of his meagre daily food ration to his pregnant wife.

“I suddenly knew that this man who was so much younger than me would teach me so much,” she said.

When Mr. Nee finally left the camp in 1992, he hadn’t heard from the family he grew up with for 11 years. With few employment opportunities in the cities, Mr. Nee headed to the countryside.

“What I found out most was that the relationship between people in the rural villages was socially fragile, very fragile,” he said. “The killing was quite common.”

Foreign donors were pumping millions into prescriptive rebuilding efforts—a well here, some rice there. The approach bred the same dehumanizing dependence that Mr. Nee had come to know at the refugee camps.

What the villages really needed, Mr. Nee decided, was the means to think and act for themselves. That realization precipitated a final career pivot toward community development work that eventually sent Mr. Nee and his family to Australia, where he so he obtained a master’s in social work and a doctorate in philosophy.

Though Mr. Nee’s academic achievements appeared to have earned Mr. Hun Sen’s anger and envy—the prime minister boasted of his children’s doctorates in the same breath that he criticized Mr. Nee—Ms. Healy said that Mr. Nee was most at home in the field.

The years since his return to Cambodia in 2002 have been a blur of provinces, consultancies and NGO work that have given him an intimate look into the lives of people across the country. His path often overlapped with his “very close friend” Kem Ley.

“So the more we share about social issues, and about economic issues, we can see, ‘Oh, this should be addressed by politics,’” he said. “That was the time when we say we have to maybe find a way to say this or that through media, so that the government could hear.”

Council of Ministers spokesman Phay Siphan claimed that the government is all ears.

“I appreciate and respect the criticism from the media,” he said.

But the former university professor’s $500,000 crime might have been shouting what others have been whispering, after an official investigation appears to have left most stones unturned.

A similar fate befell Ou Virak, a political analyst who heads the Future Forum think tank, last May for giving voice to widespread opinion the CPP was using a sex scandal involving acting opposition leader Kem Sokha as a political tool. Though the CPP’s $100,000 defamation lawsuit against him appears to have stalled, Mr. Virak remains on edge.

“I think political violence and imprisonment is going to be in the back of your mind,” he wrote in an email last week. “I try to keep that out in my analysis but I think it ultimately does have an impact as to how freely I feel about the work.”

The stack of defamation lawsuits against former opposition leader Sam Rainsy, who resigned when Mr. Hun Sen threatened to use his legal woes to dissolve the CNRP, suggests that the government sees little distinction between politicians and pundits, whom Mr. Siphan claimed serve the interests of “propaganda” outfits like the U.S. government-funded RFA.

“If I were Meas Nee, I wouldn’t feel safe either,” said Sophal Ear, associate professor of diplomacy and world affairs at Occidental College in Los Angeles, who also earned the prime minister’s ire in December for slamming what he saw as U.S. President Donald Trump’s autocratic tendencies and likening him to Mr. Hun Sen.

“We know how the game is played in Cambodia,” he wrote in an email. “There are forces that always want to invert black and white, confuse right from wrong, spin one’s moral compass, demonize the educated (at its extreme kill those who wear glasses), and pervert the truth.”

Mr. Sok, Mr. Ear, and Mr. Nee’s graduate degrees appear to be sore spots for the prime minister, whose formal education was interrupted by the civil war.

The lawsuits and threats against analysts have also taken a toll on the Kem Ley Foundation—the group of commentators Kem Ley established a month before his death to encourage more sophisticated political dialogue.

Hang Vitou, a founding member of the foundation, said he believed his telephones were tapped and his movements followed. Shady overseas donors had called offering to help the group in exchange for biographies, CVs and information on the group’s structure.

This week, the Cambodian Center for Human Rights offered to help members of the group find sanctuary if they found themselves in danger.

“After the death of Kem Ley, they want to know what we will do,” Mr. Vitou said of the government.

Under Mr. Nee’s stewardship, the group had agreed to tread more carefully in interviews.

“We set new ground rules that all analysts should focus on solutions, not blaming the government,” he said.

Mr. Nee has taken his own precautions: a gray baseball cap, less solo travel, and driving a motorbike instead of a car, after friends warned him about the possible threats of planted drugs.

“I think the prime minister, he really wants me to visit my grandchildren in the U.S.,” Mr. Nee said with a laugh.

The ruling party may also be scared, he said—scared that it has run out of time before upcoming elections to convince voters that it still deserves its perch.

“The space is too narrow now to gain people’s credibility,” he said.

Meanwhile, the analyst is busier than ever. He’s traveled to 14 provinces over the past month on several NGO projects. His phone rings relentlessly for advice or comment.

“The tree now is growing as the country is developing and people are understanding,” Mr. Nee said.

The 81-year-old Ms. Healy believes that the government should have nothing to fear from her friend’s work. But “to have people start thinking for themselves is a revolutionary act itself,” she said.

Nor does she think he’ll heed the urges of friends and family asking him to take a backseat. “It’s impossible for him to do that,” she said. “He will do whatever he feels he needs to do.”