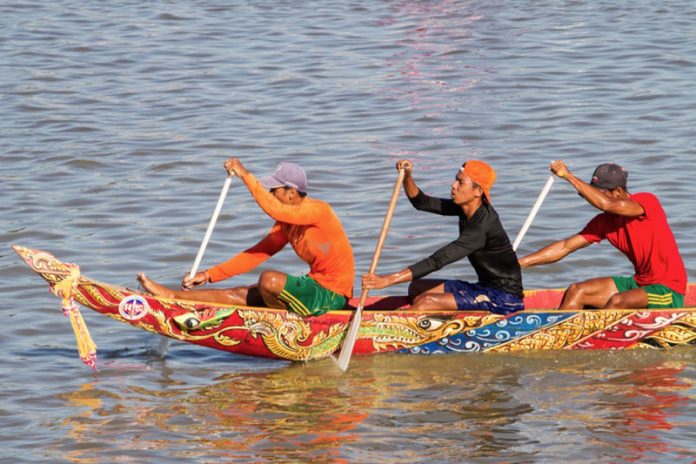 Now that the Water Festival boat races are finished, the real business has begun.

About 300 of the country’s strongest paddlers gathered in Takhmao City in Kandal province Tuesday to vie for a spot on the national team that will compete at the 38th SEA Games in Singapore in June.

Just 14 men will be selected to take part in a training camp ahead of the games.

“The communes allow many people to race during the Water Festival, but for the national team, we need only the best,” said Srun Leang, 49, who has been the coach of the national canoe and kayak teams since 2003.

Mr. Leang, a former national champion swimmer, was on the bank of the Bassac River on Tuesday, about 20 km downstream from the Water Festival finish line, and will remain there for seven days studying the form of the nation’s best paddlers.

A little more than 1,000 spectators had gathered to watch and cheer them on.

Mr. Leang said that youth, body shape and mental attitude would weigh heavily in his assessment of the paddlers, but that those factors were all secondary to technique.

Those he selects will join the training camp, he said, as soon as the team gets approval and funding from the Ministry of Education, Youth and Sports.

Tuy Bun Hoeurn, head of the ministry’s office of modern sports, explained that while athletes race in boats that carry between 14 and 22 men during the trials, training for the upcoming games would take place in canoes and kayaks that carry just one or two, depending on the event.

As the trials moved into their second hour Tuesday, Mey Moeun, 36, used his paddle to push his boat away from the bank, ready to embark on a second attempt to impress the coach.

Mr. Moeun said he was looking to make a return to the national team after last competing at the 2009 SEA Games in Vientiane, Laos.

“I want to go to Singapore,” he said.

“I will go,” he added enthusiastically.

Tho Ly Hang, 19, racing stripes shaved into his hair, said that while he had not been selected to participate in the trials, he turned up in case something went awry and a reserve was needed.

“I want to represent my country,” he said. “I probably won’t make it to Singapore, but I will keep training and maybe go in the future.”

Previous articleAs Deadline Passes, No Evictions at Waterfall
Next articleProtesters March for Removal of Village Chief