A wealthy timber trader in Stung Treng province berated a group of local journalists on Friday for reporting her illicit logging activities to officials despite being paid bribes to stay quiet.

Heng Samneang, who has repeatedly escaped punishment despite being linked to numerous cases of illegal logging, called a meeting in Siem Bok district Friday morning to denounce journalists she believed had tipped off military police to a recent timber run. 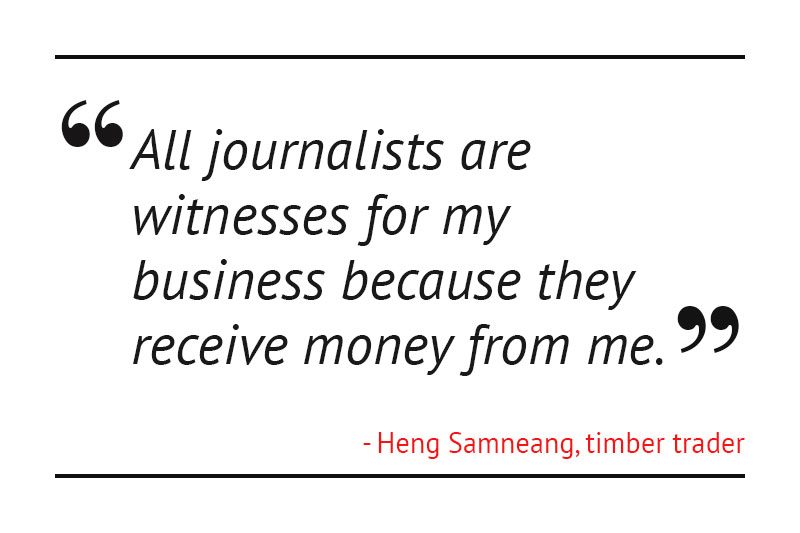 “All journalists are witnesses for my business because they receive money from me,” Ms. Samneang, widely known as “Yeay Proeung,” tells the group of about 10 reporters in a video that was posted to Facebook over the weekend.

Despite accepting money for their allegiance, however, the journalists had compromised their integrity by alerting officials to her illegal activities, she explains while waving burning incense above her head.

“I am making a business for a little bit of money and I share it with people,” an angry Ms. Samneang says. “If they receive word from me, do not mistreat me. If they mistreat me, they will die from their car overturning.”

Ms. Samneang declined to comment on the meeting when contacted on Sunday.

Ros Saly, a reporter in the province for Koh Santepheap newspaper who was at the meeting, said it was called by Ms. Samneang after local authorities stopped five of her wood-packed vans from crossing into Vietnam on Thursday night.

Having been alerted that provincial military police were preparing to block the vans’ path between Kratie and Tbong Khmum provinces on National Road 7, Ms. Samneang told the drivers to cancel the trip, Mr. Saly said. When they arrived back at her warehouse in Siem Bok district, officers were there to meet them, leading her to blame journalists for telling authorities, he said.

“Yeay Proeung is a timber trader in Stung Treng province, and every journalist and authority has known how she makes a living for a long time because they get monthly payments from her,” he said.

Forestry administration officials could not be reached. They said earlier this month that the businesswoman was being investigated after a raid of her warehouse revealed piles of illegally harvested wood. However, they said neither she nor her employees were questioned or detained in that case, refusing to explain why.

Deputy provincial police chief Nou Hour said Ms. Samneang had told his officers in the past that she had paid off higher-ranking officials to allow her to continue operations. But he said he did not believe her.

“I don’t think that Yeay Proeung gives monthly payments to police, because I have never received the money—not even $1,” he said.

And while authorities were aware of her illegal activity, he said, “our authorities do not guard for 24/7 to stop wood transportation,” and had therefore been unable to stop what he suspected were late-night hauls across the border.

Earlier this year, the government put a blanket ban on the export of timber to Vietnam in an effort to curb illegal logging. However, Vietnamese customs data shows that plenty of luxury timber is still getting through—more than $85 million worth during the first half of the year.

According to Hou Sam Ol, provincial coordinator for rights group Adhoc, Ms. Samneang had built up a network of at least 20 local journalists that were paid off to keep their mouths shut.

“Journalists who receive monthly payments from Yeay Proeung always keep silent,” he said. It was other reporters who were not on the take that “always reported her to authorities to stop her vehicles from transporting wood.”

One journalist, Kim Sreng of the Doeum Ampil News website, said that while he did not receive regular payments from the businesswoman, she had offered him between 50,000 and 100,000 riel ($12.50 and $25) during sporadic meetings in the past.

Mr. Saly, the journalist that attended the meeting, also admitted to accepting money from Ms. Samneang, but declined to say how much.

“If I tell you, it will seem as if I have cut off my testicles for a dog to eat,” he said.