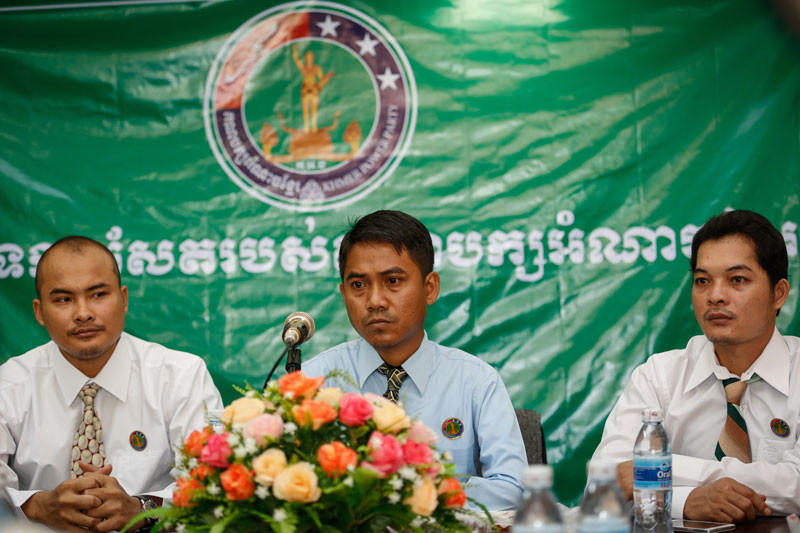 The government has pardoned and released three men convicted alongside self-exiled dissident Sourn Serey Ratha in January on terrorism charges that were characterized by rights groups as baseless and politically motivated.

The move, which came last week, fulfills the last of three conditions Mr. Serey Ratha set for his return to Cambodia, which is scheduled for October 1. The government pardoned Mr. Serey Ratha in July and registered his political organization, the Khmer Power Party, days later.

“I was happy when they’re released,” Mr. Serey Ratha said Monday while on his way back to Bangkok from the Thai-Cambodian border, where he met with the three men on Sunday. “They were imprisoned without justice because they did not commit any crime.”

A photograph posted to Mr. Serey Ratha’s Facebook page shows the four of them standing together and smiling broadly.

All four were convicted by the Phnom Penh Municipal Court of obstructing elections and plotting against the government for printing T-shirts with a message urging people not to vote and planning to distribute them ahead of the 2013 na­tional poll. The three men pardoned last week were arrested in Battambang province with the shirts in their possession and sentenced to either five or six years in jail. Mr. Serey Ratha, who was tried in absentia, was convicted of the additional charge of incitement and sentenced to seven years.

Sok Sam Oeun, a lawyer who represented the four in court, maintained that the group had committed no crime and that the charges were clearly political.

“They were arrested due to the slogan on their T-shirts related to the election,” he said.

Seng Sok Meng, who was pardoned along with Serey Bunlong and Um Phearun, said they were released on Friday.

Mr. Sok Meng said he was back with his family in Battambang and planned to ask for compensation for his incarceration.

“It was very unjust for us because we did not do anything wrong,” he said. “I think that I will complain to demand compensation from the government for my time in prison, when I lost out on income and my reputation suffered.”

During their trial, the three men de­nied any affiliation with Mr. Serey Ratha’s cause. On Monday, however, Mr. Sok Meng said he would support the new Khmer Power Party, won over by the food and money Mr. Serey Ratha supplied to him and his family during his more than two years behind bars.

Ahead of the trial of the four, Prime Minister Hun Sen repeatedly described Mr. Serey Ratha as a terrorist bent on an armed overthrow of his government. Mr. Serey Ratha has openly called for an Arab Spring-style uprising against Mr. Hun Sen, whom he accuses of presiding over an illegitimate government secured through fraudulent elections, but denied espousing violent means.

Justice Ministry spokesman Chin Malin confirmed the pardons and said they had been sought by the prime minister, although he would not comment on the reasons behind Mr. Hun Sen’s move.

“They were pardoned sometime last week,” he said.

Rights groups said the four were labeled terrorists by the government in the lead-up to the 2013 election as part of a broad attack by the ruling CPP on the opposition CNRP. Those same groups now claim that Mr. Hun Sen has orchestrated the men’s release and the registration of the Khmer Power Party in the hope that it will draw votes away from the CNRP in upcoming elections.

Mr. Serey Ratha says he has yet to decide whether to participate in the elections and wants to see several—highly unlikely—reforms first, including an overhauled National Election Committee free from any party affiliations, a popularly elected prime minister and term limits for the post.