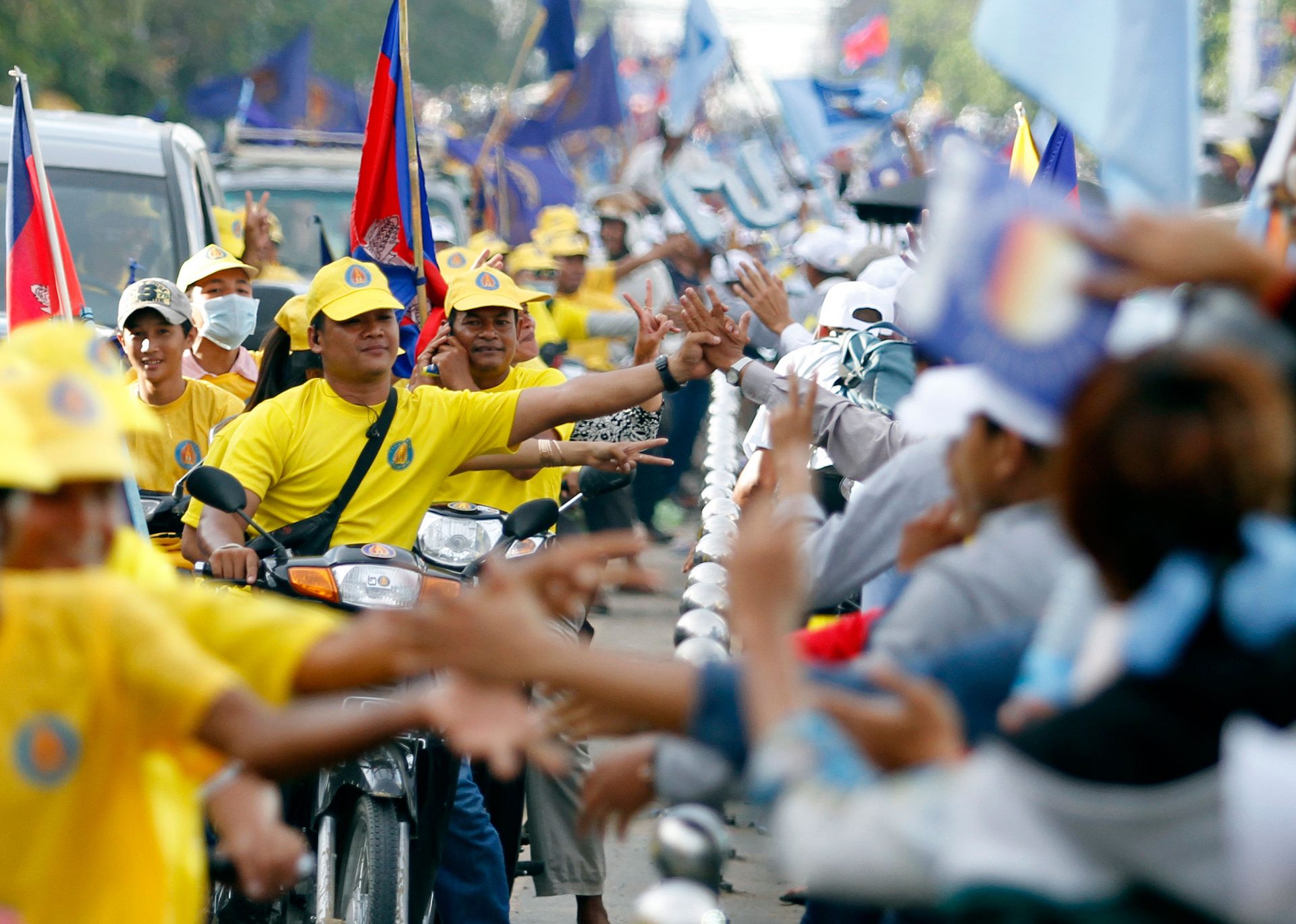 After an early morning rally on Koh Pich followed by a parade through Phnom Penh in a final show of support for the ruling party before Sunday’s election, supporters of the CPP were asked to line the road in front of the prime minister’s house and wait for a guest.

They expected Mr. Hun Sen. They got his wife, Bun Rany, instead.

Emerging from the prime minister’s palatial home, Ms. Rany greeted the cheering—if somewhat surprised—crowd with smiles and waves before an hour-long procession of supporters regimented into their respective Phnom Penh districts began filing past the prime minister’s home.

“I feel very excited now be­cause our leaders came to meet us in person,” said Ly Gech Horng, 22, who was standing a few meters away from Ms. Rany.

Ms. Rany clasped hands with those who passed, ruffled the hair of others, and retreated slightly from the fast-moving crowd only when a large group of middle-aged women boldly seized her and began hugging and kissing her.

Sok Sopheara, a 23-year-old student from Phnom Penh International University, said that he had been hoping to see the prime minister but was still pleased to see Ms. Rany.

“I saw her and I now feel very confident,” said 23-year-old Sok Sopheara. “I wanted to see [Mr. Hun Sen]. I expected that he would come out when his wife came out.”

“But when he didn’t come, I wasn’t disappointed. I still support him because I love him,” he added.

Across the city at Freedom Park, opposition CNRP faithful gathered Friday afternoon in their thousands, bolstered by the return of formerly exiled party president Sam Rainsy, who had been the recipient of an unexpected Royal Pardon two weeks ago.

Mr. Rainsy has made the most of the seven days he has had in the country to drive home the opposition’s message in rural areas that the country is in dire need of change to prevent further corruption and encroachment of Cambodian land, and that he and his deputy, Kem Sokha, are the ones to deliver it.

Mr. Rainsy’s address at Freedom Park on Friday was one of his last chances to convince the ruling party that it should be worried about the outcome of Sunday’s vote, despite the likelihood that the CPP will retain its grip on the National Assembly.

“Cambodian people, today your presence across the country, especially in Phnom Penh, clearly shows that Khmer want change,” he said.

“The change you want, dear people, will happen in two days.”

Mr. Sokha, who had to fight his way to the front of the stage after reporters closed in on Mr. Rainsy, made a similar call.

“Change to rescue our nation…. The ruling party has ruled for more than 30 years and we, the Khmer, have suffered a lot. We cannot stand any more,” he said.

On his way to Freedom Park from Kompong Cham province, where he had been campaigning during the day, Mr. Rainsy had stopped off at the U.S. Embassy to meet with U.S. Ambassador William Todd for a closed-door meeting.

“I can confirm that the ambassador did have a meeting with Sam Rainsy, but I cannot disclose what they discussed because it was a private meeting,” U.S. Embassy spokesman Sean McIntosh said.

The CPP began its final campaign day at 8 a.m. on Koh Pich, as purpose-built trucks hosting miniature concerts drove into place around the island while a few thousand young CPP supporters ate breakfast and danced.

Pov Ponlork, 18, said he had turned out because he supported the CPP and was disappointed he wouldn’t be able to campaign for the party for another five years.

“I support the CPP because they are updating our country and developing our country,” he said. “I’ve come to campaign every day, I think it’s so fun. I feel very happy for the last day—I will enjoy it to the maximum today.”

“[The question of] winning or losing isn’t important because we know that we will win anyway,” he added, explaining that the CPP had given him petrol, lunch and 5,000 riel, or about $1.25, for the day.

Chea Dara, 33, said that he was more than happy to participate in the final campaign day, despite having been required to attend the event.

Shortly before the campaigners left Koh Pich, former Phnom Penh municipal governor and CPP lawmaker candidate Kep Chuktema delivered a speech urging the crowd to remember the CPP’s successes in development over the past 30 years.

After the speech, Mr. Chuktema said that the hectic campaigning from both parties over the past 30 days showed that Sunday’s election would be free and fair.

“I think there is nowhere more fair than Cambodia,” he said. “There is a one-month campaign period, and everybody had the ability to participate.”

But the apex of the morning came when CPP Senate Presi­dent Chea Sim made an appearance in a black minivan.

The van briefly parked in front of Koh Pich Theater to allow the media to photograph Mr. Sim, before doing three laps around the island and departing.

A waving Mr. Sim elicited excited waves back from groups lining the streets of Koh Pich, though some seemed confused by his presence.

“[I saw] His Excellency Chea Sim. I am surprised because on Facebook it said he had passed away,” said 23-year-old Leng Muoykim, adding that she was not disappointed that Mr. Sim had not left his vehicle.

“He might not have energy to speak,” she said. “I wanted to hear him talk, but he’s sick.”

Others at the CPP’s rally, however, were less certain of who they had just seen pass by.