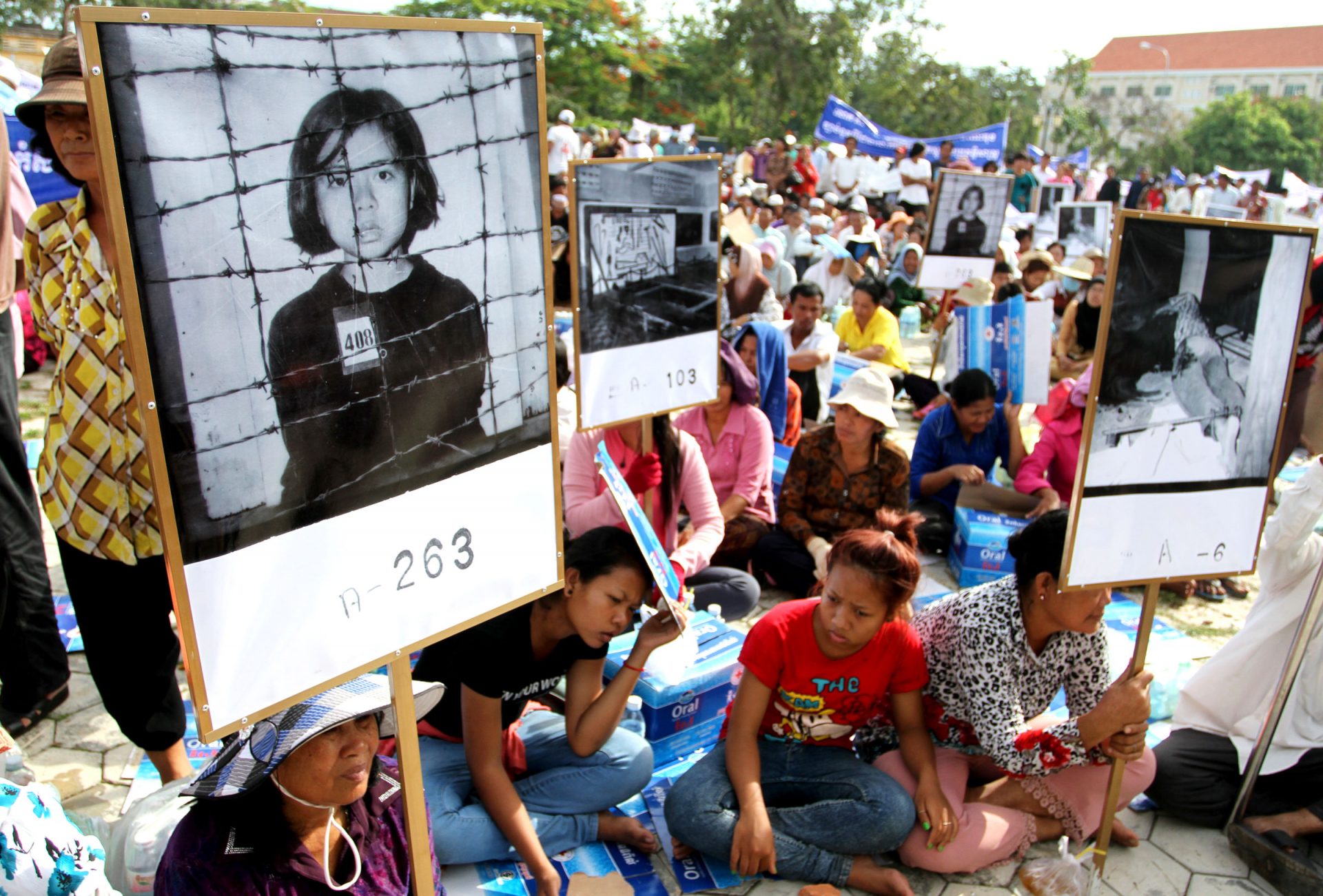 Thousands Rally Against Comments Made by Kem Sokha

What was billed for weeks as a groundswell of popular anger against opposition leader Kem Sokha—for comments he allegedly made denying Khmer Rouge responsibility for Tuol Sleng prison—turned into a political rally of thousands in Phnom Penh on Sunday that had clear support from local authorities.

Tuol Sleng survivor Chum Mey first announced his plans for a protest on May 25, only days after the government released audio of Mr. Sokha apparently accusing Vietnam of fabricating the Khmer Rouge’s crimes at Tuol Sleng, where an estimated 12,000 men, women and children died.

Mr. Sokha, acting president of the Cambodian National Rescue Party (CNRP), the CPP’s main challenger in July’s national election, has in turn accused the government of doctoring the recording and of using Mr. Mey as a foil to organize Sunday’s demonstration.

“I only want Kem Sokha to apologize at Tuol Sleng museum,” Mr. Mey said using a megaphone and addressing the crowd at Freedom Park from the back of a flatbed truck. “Why can’t Kem Sokha light three incense sticks? Is it heavy or is it light for him to apologize for what he said? If we talk at Tuol Sleng, the people will feel fine and the souls of the victims will feel fine.”

Before wrapping up, however, Mr. Mey delivered what sounded every bit like a campaign speech for the CPP.

“Now they have developed the country,” he said. “You can have a look. Everywhere there are schools, hospitals, bridges, roads and everything. What does he [Mr. Sokha] want? Kem Sokha calls for change, change, change. Change for what? They [CPP leaders] have tried their best. Why should we change?”

Though Mr. Mey had prom­ised a crowd of 20,000 for the rally, less than half that number came out. And for thousands of people supposedly incensed by Mr. Sokha’s words, it was a very quiet crowd. Not once did they cheer Mr. Mey on, and only once or twice did they half-heartedly clap or raise their arms.

In the crowd, Bin Sothy was holding up the left end of a long banner that said, “Kem Sokha is fighting against the Khmer Rouge tribunal.”

“The commune authorities made this banner for us,” said Mr. Sothy, a resident of Dangkao district’s Spean Thma commune.

Despite the government kit, Mr. Sothy said no one had urged him to join the protest. “I suffered when I heard him [Mr. Sokha] because I was a victim of the Khmer Rouge,” he said. “I think that he is not Cambodian.”

Math Salesh, another protester, said he volunteered to join the rally but the trip from Russei Keo district to the park had been paid for by the government.

“I took a truck with 70 people, and district authorities paid for the truck and some people were given bread and bottles of water,” he said.

Back at Freedom Park, shortly after 9 a.m., Mr. Mey lead a motorcade of about 2,000 people on trucks and motorcycles to CNRP headquarters.

After some negotiating between intermediaries, CNRP candidate Mu Sochua met Mr. Mey just outside the compound gates for a brief and cordial few minutes, where she accepted his petition requesting Mr. Sokha’s apology.

Naly Pilorge, director of rights group Licadho, said the government’s fingerprints were all over the event; her staff spoke with some protesters who said they were paid to attend.

Outside Phnom Penh, thousands more joined protests and marches against the CNRP in provinces across the country. According to field staff for Licadho and the Community Legal Education Center, more than 13,000 people joined anti-opposition rallies in at least 14 provinces from Battambang to Kompong Chhnang.

Rights group Adhoc put the number of protesters nationwide, Phnom Penh included, at about 30,000. Ms. Pilorge said some of those rallies also bore the government’s marks.

“They were similar to Phnom Penh in the sense that [government] vehicles and materials were used and village chiefs and district officials were seen organizing people,” she said.

CPP lawmaker Chheang Vun said the size of the crowds that joined the protests nationwide was proof that the government could not have been involved.

“How could we have enough kramas and money to give them? We did not ask anyone to come to the protests,” he said.

Ms. Sochua, who met Mr. Mey outside CNRP headquarters, said the party’s position had not changed and Mr. Sokha would not apologize for comments he insists he never made.

“It’s really, really clear what Kem Sokha said and we’re united behind him,” she said inside party headquarters soon after the protesters had driven off. “The one clear message from our side is a message of peace for Cambodia. I said to him we respect their right to say whatever they like in their petition,” she said.