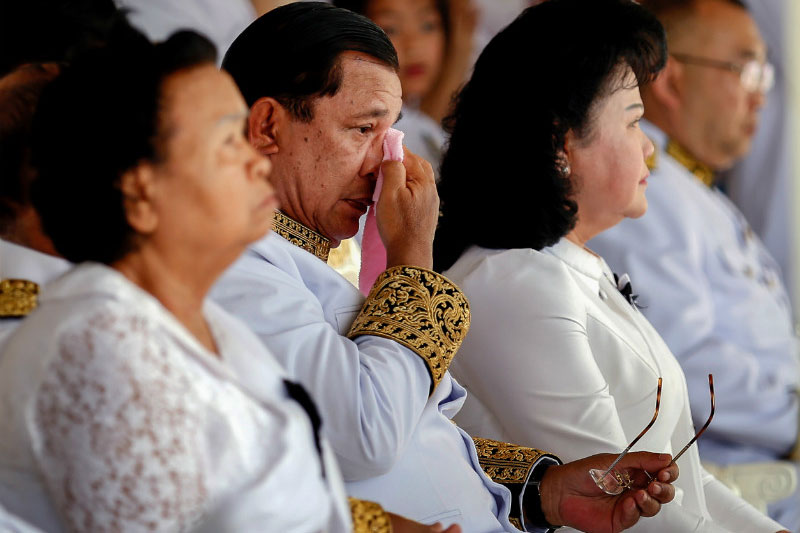 Chea Sim was released into the afterlife Friday in a half-day Buddhist ceremony climaxing with a single firework shot into his coffin to ignite the intricate stupa built in Phnom Penh’s Wat Botum park to honor the longtime CPP president.

Thousands of mourners lined either side of Norodom Boulevard at 7 a.m. as a procession carved a route from Chea Sim’s house in Chamkar Mon district past CPP headquarters and the Senate to Independence Monument, where government leaders and senior CPP officials stood waiting.

At the head of the procession, the body of the longtime Senate president, who died on June 8 at the age of 82, lay inside a grandiloquent, gold-trimmed casket on the back of a float decorated as a three-headed naga and tended by Royal Palace guards dressed in all white.

As the organized mourners—including members of the military—arrived at Chea Sim’s stupa and fell into formation, most of those who had come of their own volition quickly dissipated, leaving just a few hundred members of the public to hear Prime Minister Hun Sen deliver the eulogy for his longtime political partner.

“In a moment, Samdech’s body will vanish from us all,” the prime minister said, using an honorific for Chea Sim, to a pavilion packed with dignitaries as he stood at the foot of the stupa.

“But what remains and what will never vanish with the body are Samdech’s good deeds, dignity, struggle, patience, seriousness, sincerity, idealism and great achievements for the nation, religion, king, society, Buddhism and the people,” Mr. Hun Sen said. “These noble virtues will not disappear but remain eternally.”

Sar Kheng, the interior minister and brother-in-law of Chea Sim, played a prominent role in the ceremony, leading the late leader’s family and others on a symbolic circling of the elaborate stupa ahead of its ignition.

One piece of symbolism then made way for another, as Mr. Hun Sen was followed by his wife, Bun Rany, to lay a memorial wreath to the left of Chea Sim’s medals of achievement. Simultaneously, new Senate President Say Chhum followed National Assembly President Heng Samrin to do the same on the right of the medals, which were displayed alongside a large portrait of Chea Sim in his gold-trimmed civil servant’s attire.

Mr. Kheng then gave a brief address, thanking all in attendance and those who had been by Chea Sim’s side during his long battle with ill health following a stroke in October 2000.

“I am absolutely thankful to the doctors from Vietnam, France and Singapore and the Cambodian doctors and nurses who worked hard to treat the illnesses of Sam­dech…Chea Sim,” he said.

King Norodom Sihamoni, who along with Queen Mother Noro­dom Monineath was dressed all in black among a sea of white-clad dignitaries, then rose to his feet and extended a scepter, to which Mr. Kheng held up a candle. The King then lit an overhead fuse that sent a flash of fire into the coffin and also ignited a series of fireworks and enough smoke to engulf the entire party.

Once the white smoke had cleared, a few minutes before 11 a.m., black smoke began to rise from the coffin as attendants fanned the flames.

“We cannot compare with the late King’s funeral but I think this is second to the late king’s funeral,” said City Hall spokesman Long Dimanche following the cremation. “The preparation brings great honor.”

Mr. Dimanche lept to the defense of Chea Sim after Human Rights Watch (HRW) published a statement hours after his death highlighting his role in the murderous Khmer Rouge regime, and the fact that he had never been brought before a court.

“It is a mockery of justice that Chea Sim could serve in the post-Khmer Rouge Cambodian leadership for decades without ever facing an investigation, much less arrest or prosecution,” HRW’s Asia director Brad Adams said in the statement.

In a response to the statement, City Hall said that civil servants, the municipality and the people of Phnom Penh “could not accept” the allegations, claiming that Chea Sim was “a victim of the Khmer Rouge regime.”

On the fringes of Friday’s ceremony, youth group members who had been standing in formation for hours paid their last respects to Chea Sim preferring to remember his role in the overthrow of the Khmer Rouge rather than his participation in the regime.

“I regret this loss very much because he is a good leader who helped the country along with Samdech Hun Sen,” said 15-year-old scout member Sok Ly. “He is a simple leader who stands for neutrality and never exploited anyone.”
Ka Oeun Pecheta, a 17-year-old youth volunteer with the Cambodian Red Cross, described Chea Sim as an “intelligent hero” who “rescued Cambodia from the Pol Pot regime.”

“I want the next generation to take his example because he is an intellectual who helped develop the country,” she said.