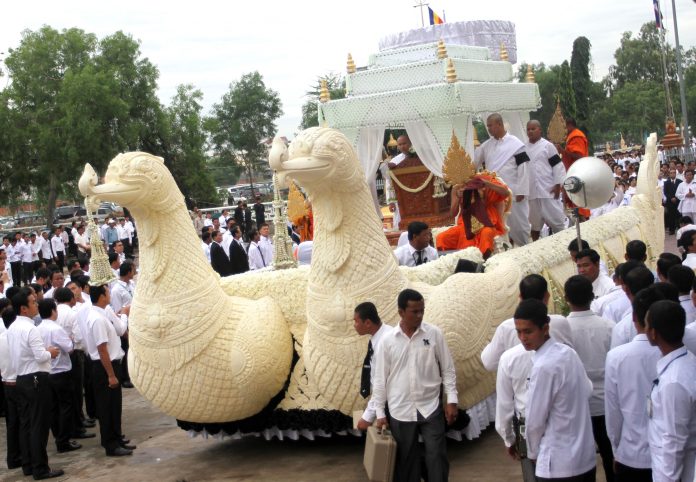 Thousands of mourners turned out Wednesday to pay their respects as Prime Minister Hun Sen bade farewell to his father, Hun Neang, whose funeral cortege made its way along Norodom and Russian boulevards toward his final resting place at Vongkut Borei Pagoda, where Mr. Hun Sen’s mother is also buried.

Buddhist incantations hushed the busy morning streets as a convoy of SUVs and luxury cars followed two boat-like funeral carriages, sculpted into mythical Hong birds, which were almost identical to the one used in November to transport the body of the late King Father Norodom Sihanouk to his cremation site, albeit more modest in size and ivory-colored, rather than gold.

When the body arrived at the pagoda’s front gate at 7:30 a.m., Mr. Hun Sen and his wife, Bun Rany, dressed in traditional white cotton tunics, stepped out of their car to lead the funeral procession—packed with high-ranking government officials and civil servants—on foot the remaining 100 meters to the temple.

Hun Neang died of natural causes on Friday at 89 years old after a decade of ill health. A former monk, who reportedly left the monkhood to join the resistance movement against French colonial rule, Hun Neang spent his later years at Wat Botum pagoda and will be remembered for his charitable work.

“I am grieving the death of Samdech Prime Minster Hun Sen’s father because he helped many with hu­manitarian aid and distributed gifts to poor people when he was alive,” said 20-year-old Choun Sothy, one of about 100 white-clad young women from the Royal University of Phnom Penh who were invited to take part in the ceremony.

“Neak Oknha Moha Pheakdey Saburisak Phoukea Thipadei Hun Neang is the god and hero of his family,” said an announcer over a loudspeaker at the pagoda, using the honorary title given to the deceased by the late King Father Noro­dom Siha­nouk, which translates as “Oknha of great honesty and charity.”

The respectful, understated ceremony ended at 8:40 a.m. after Hun Neang was laid to rest next to his late wife, Di Pok, with whom he had six children, 30 grandchildren and 66 great-grandchildren.