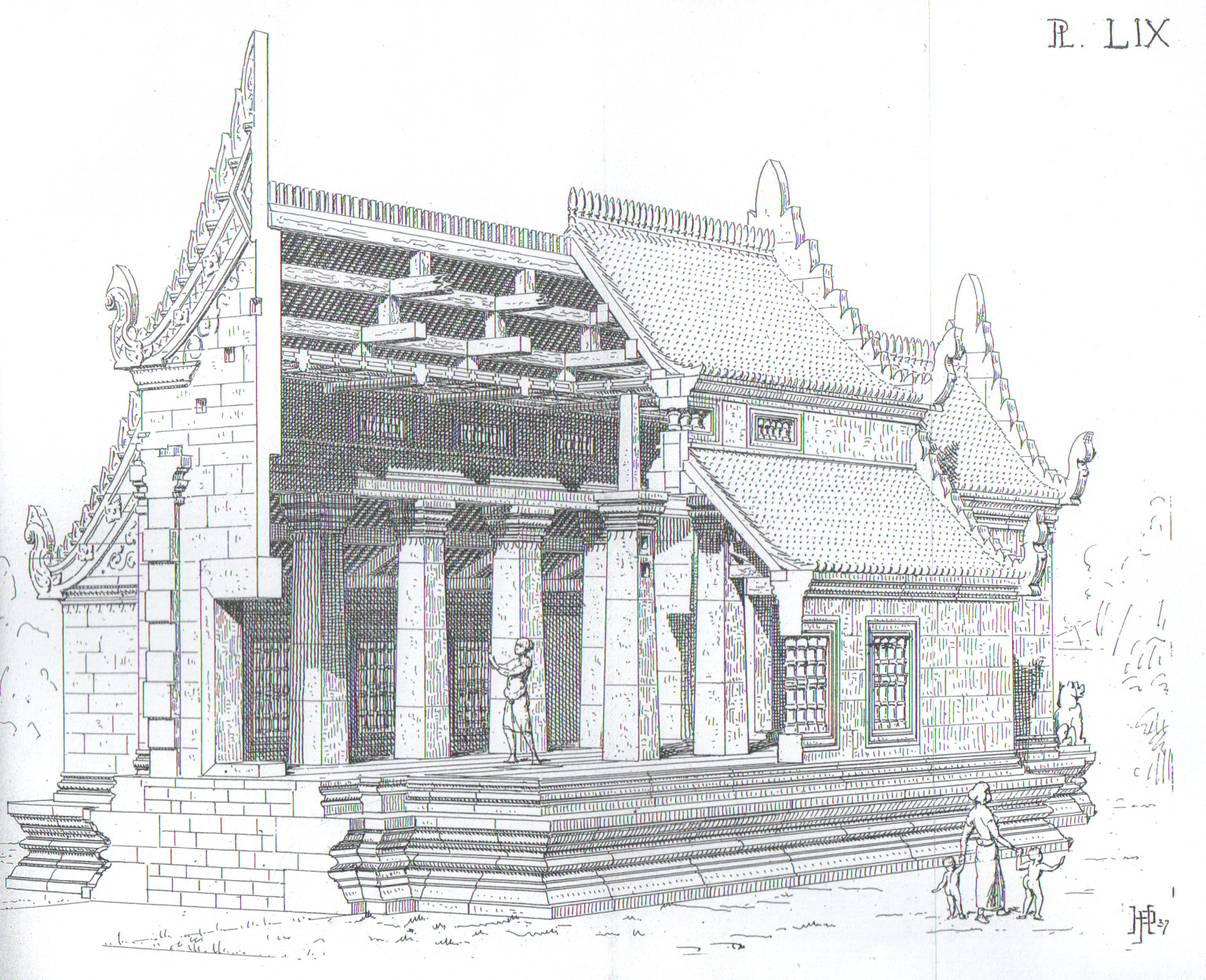 Bruno Bruguier’s latest book on three major Angkorian-era monuments, which will be released on Wednesday in Phnom Penh, may take one aback because of its sheer size.

But, what else to expect from a researcher who has spent the last 22 years gathering information on Khmer monuments in all possible archival collections in France and Cambodia, and who has also crisscrossed the country hoping to view and record every structure that the Khmer empire ever built.

The French archeologist, who prefers to be known as an architecture historian, confesses that he had underestimated the amount of information that was necessary to include in the book. And though the work is meant for a general audience of people interested in Cambodia’s history and monuments, he admits in interview that, “Being a researcher, I could hardly produce a backpacker-style travel guide or a coffee-table book.”

So, Mr. Bruguier’s latest work on the temples of Koh Ker, Preah Vihear and the Preah Khan of Kompong Svay is a 620-page tome, illustrated with more than 700 photos, maps, historical images and illustrations that makes it “reader friendly.”

It is also a rare comprehensive record on these three important Angkorian monuments.

Published in French, and titled “Preah Khan, Koh Ker et Preah Vihear, Les provinces septentrionales,” or the northern provinces, the work is part of Mr. Bruguier’s series on the Khmer monuments of the various regions of the country.

A researcher with the Ecole francaise d’Extreme-Orient (EFEO)—the French government institution that began studying and restoring Khmer monuments around 1900—Mr. Bruguier embarked on this project in the late 2000s after he completed the mapping of Cambodia’s archeological sites and monuments with the Ministry of Culture, a project which identified more than 5,000 sites, he said.

As he will explain at a conference at the Institut Francais in Phnom Penh on Wednesday night, surprisingly very little had previously been written on these three important temples, and what exists is often inaccessible to non-researchers.

For instance, besides a 10-page document written in 1935, the only major work on the Preah Khan of Kompong Svay is an unpublished thesis written in the late 1960s by Bernard Philippe Groslier, a French researcher who was overseeing monument restoration at Angkor at the time. The thesis has been kept ever since at the Ecole du Louvre school located next to the Louvre museum in Paris.

Japanese researchers such as Akinori Mizoguchi and Takeshi Nakagawa have done interesting studies on Koh Ker, but many of these works are only available in Japanese, which limits accessibility, Mr. Bruguier said.

As for Preah Vihear, which now features on the World Heritage List, documents available tend to be incomplete.

“We now speak a great deal of the stairs that rise from the Cambodian plains towards the monument,” he said. George Groslier, who visited Preah Vihear in the early 1910s and would later found the National Museum in Phnom Penh, wrote about these stairs and their symbolism for pilgrims who would have used them to reach the temple. However, EFEO researcher Henri Parmentier, who produced an extensive study of the temple in 1939, concentrated on its architecture without really addressing the stairs’ significance, Mr. Bruguier said.

Some sketches and archival photos in the book highlight how pillaged these monuments have been in the 20th century. A 1929 photo from the EFEO archives shows the west side of a gallery at Preah Vihear with an elaborately sculpted pediment that is now missing, demonstrating once more that looting has not stopped at small-sized or stand-alone features.

Speaking of the Preah Khan of Kompong Svay, Mr. Bruguier says that its remote location in the jungle has not protected it from pillage. In fact, he writes, “More than any other temple in Cambodia, the great Preah Khan is a martyr monument.”

The temple in which it is believed that Jayavarman VII took refuge before seizing power in Angkor and acceding to the throne in the early 1180s has not yet been the object of any restoration project.

Mr. Bruguier took about two years to compile the book. “But this was following two decades of research into Khmer monuments,” plus the help of numerous colleagues who contributed information, he said. For instance, he was able to find an inscription about Preah Vihear that was believed lost: a Thai researcher located it for him at a Thai pagoda.

Mr. Bruguier is now working on his next book that will be about the western region including Battambang province and the Banteay Chhmar monument.

His conference at the Institut Francais Wednesday will start at 7:30 pm.

English and Khmer translation will be provided.