For years, Leang Seckon dreamed of having a home near Angkor that would be an extension of his art.

Profoundly Buddhist, he believed that this would happen when it was meant to happen. For over 10 years, he kept the idea of such a house, set among flowers and trees, in the back of his mind. He knew that the perfect piece of land would surface in time.

It would take nearly a decade but Mr. Seckon finally completed his home late last year. Set in a meticulously designed garden, the result is a harmonious living space of great beauty.

Mr. Seckon—one of the country’s most prominent artists, with both a national and international following—conceived of the home as an artwork, carefully planning every element. Each artwork that he produces—whether painting, mixed media or installation—proliferates with tiny visual icons and details that hold deep cultural and religious significance, while also contributing to the visual concept of the work as a whole.

He took the same approach to the house, in which every detail has a complex meaning, from the purification pond in the garden to the tiny motifs painted on the wall of his prayer room. On a broader level, they all contribute to a house-wide theme that combines Mr. Seckon’s passion for art with his deep spiritual connection to Angkor: the Cambodian legend of Tep Sodachan.

The legend tells the love story between a devata, or minor deity, and a human man whom her father orders to marry because she stole a flower from his garden.

As the impossible happens and they fall in love, the devata helps him pay his debts and become a free man. They soon have a son, but, having completed her penance on Earth, the devata’s father orders her to leave her new family, which she is forced to do.

But there is a next chapter to the legend. Since their son Pesnuka has talent for the arts and architecture, his devata mother invites him to study arts in Heaven. And so it would be him who, having become a divine architect, would build Angkor Wat for King Suryavarman II in the 12th century.

With both Buddhist imagery and this legend in mind, Mr. Seckon painted window shutters and door panels as well as actual framed paintings for his home with scenes such as Tep Sodachan returning to Heaven and her husband carrying their son.

Drawing on the legend as inspiration for the house’s art was particularly important to Mr. Seckon because he has always felt deeply inspired by Angkor. “When I have a break from [working on] my artwork, I always go to Siem Reap and Angkor because it’s spiritual for me,” he said.

After searching for several years, in 2004, Mr. Seckon found the ideal parcel of land in a secluded corner of Siem Reap City, and made the initial payment, not having enough money to purchase it outright. That is, until he received a call from the Royal Palace: King Norodom Sihanouk had seen one of his paintings and wished to purchase it.
“The King Father loved my painting,” he said. “My art allowed me to buy the land.”

This meant a great deal for Mr. Seckon as the late king and the Cambodian art scene of the 1960s, which he dominated, have always fascinated Mr. Seckon and featured prominently in his work.

By late 2004, Mr. Seckon was able to acquire the land outright but, having to create works for one exhibition after the next, both in the country and abroad, had to set his house project aside.

In late 2011, he heard of a decades-old home in Siem Reap province that was being demolished. Only the beams and frame could be re-used. Having organized a number of events to promote environmental protection, Mr. Seckon believed in re-utilizing already cut wood when feasible.

With a first load of wood on his land, it was time for Mr. Seckon to finally plan and build his home.

This, he meant to do by living on his land to better plan the garden and home. Since design and construction could take months, he resorted to having workers build a one-room house with basic facilities on the lot.

“Then I started living there and growing flowers,” he said. That ad-hoc garden would end up being a crucial element of his home.

As it turned out, living on his land with a 3-square-meter home for shelter was magical for Mr. Seckon, who was transported back in time when, as a boy in the countryside, he would take care of the cattle in the fields. “Now I’m outside…I love the weather, I’m a buffalo boy, I live in the rice field, I live with the sky. And I make a lot of artworks.”
The house and garden took 16 months to build. So it is only in late 2012 that Mr. Seckon started painting the house’s artworks, which would take him until the end of last year to complete.

Once the house and garden were completed, he invested one more year to add design features and elaborate paintings on shutters and other architectural elements of the house.

These would include painted motifs on the side of each step of the staircase leading to the living room. He also sculpted a lotus dominated by a snail-shell curl topping the roofs of the small entrance and garden pavilions. The Buddha is often depicted as sitting on a lotus flower that also suggests enlightenment, and the curl motif, Mr. Seckon explained, “signifies the center, the essence of things…opening and sharing with everyone.”

“I feel like the walls of the house is the body and the roof is the head,” he said. “And through my artworks, I want to share my experience, you know, share love with people. Like the flower on top of the roof, which means to be open and free and give love to everyone.” 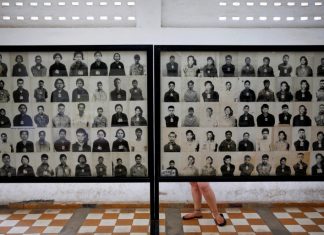 By
ឌឹ ខេមបូឌា ដេលី
-
April 12, 2021
0
The photos of Khmer Rouge ‘killing fields’ victims with added smiles were an insult to the dead, Cambodia says.