Home News The Grain of Rice That Could Help Cambodia Grow 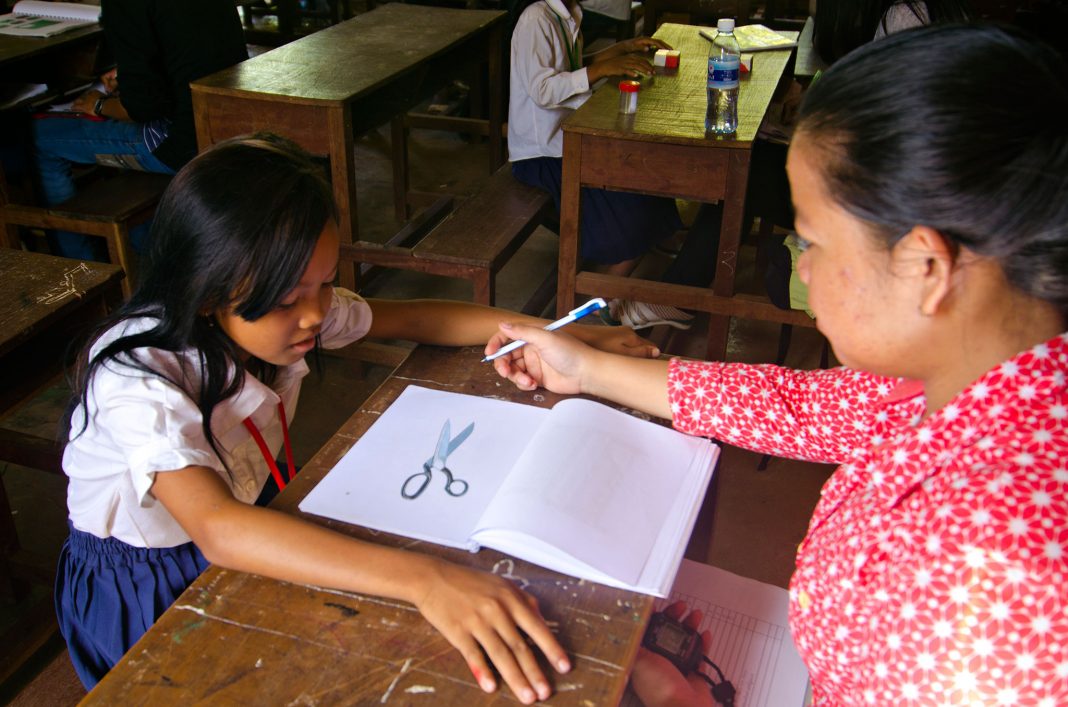 SAMRAONG TONG DISTRICT, Kompong Speu Province – Laughing, Ouch Samnang jumped back and forth over a skipping rope held by his classmates. The 13-year-old goes to school in a small village in Kom­pong Speu province, he has friends, five siblings and loving parents. Overall, he is a happy child. But what Samnang doesn’t know yet is that his brain is underdeveloped for his age—simply because he is malnourished.

Asked what he usually eats for lunch or dinner, Samnang’s answer is simple: rice. His friends started to giggle, and he quickly added that at times, he also eats fried vegetables or pork. His simple diet has led to stunting and he is underweight—obvious signs that other organs, including the brain, are also less developed.

Samnang is not an exception: More than 40 percent of Cambodian children share the same fate, according to a recent study by the U.N.’s Food and Agriculture Organization, meaning that the physical development—and future—of almost half of the country’s children is hampered due to low vitamin and nutrient intake.

A pilot project by L’institut de Recherche pour le Developpement (IRD) and the World Food Program (WFP) in school children around Kompong Speu province is now trying to tackle the problem by adding rice fortified with vitamins and minerals to the children’s diet.

Similar nutrition projects, WFP said, are being conducted in other countries. If they are successful, the projects will be expanded, and could change the lives of almost half-a-million children in Cambodia, and millions more worldwide.

“Stunting is just a sign that the body is not developing the way it should, and that affects all organs, including the brain,” said senior IRD researcher Frank Wieringa, who leads the project in Kom­pong Speu.

Children on a proper diet, however, are more likely to be in the correct grade at school, and there are devastating long-term disadvantages for the children who are being left behind, according to the report.

“Children who are malnourished go on to earn 20% less as adults than the children who are well nourished. But there is some evidence that the difference could be even larger—one study has estimated this earning deficit for malnourished children at 66 percent,” the report states.

This also has an effect on the wider economy, as malnourished children perform poorly in school and drop out earlier, which could decrease a country’s gross domestic product by between 2 to 11 percent, according to the report. It also says that adults who were malnourished as children are more likely to suffer from non-communicable diseases, such as hypertension and obesity.

“We have all these non-communicable diseases which are all linked to malnutrition as a child. If you are stunted as a child or malnourished in the womb, your body thinks the outside world is not good so I better put on weight when I get nutrients…. Obesity is not just what people are eating at the moment, but also how they are programmed” to process food as infants, Mr. Wieringa said. Such a phenomena has already led to high obesity rates in Viet­nam and Indonesia, which has been further fueled by the more recent consumption of high-calorie fast foods.

A solution to all these problems, Mr. Wieringa believes, is inexpensive and simple.

“Basically we just add minerals and vitamins to rice,” he said.

The process is straightforward too. Rice flour is fortified with those all-important nutrients, then pressed into the tiny shape of normal rice grains and added to conventional rice.

In cooperation with the WFP, which has served meals in Cambodian schools since 1999, a project that currently benefits some 400,000 children, IRD has provided fortified rice to about 2,000 children in 16 elementary schools in Kompong Speu province.

“When they eat the rice for breakfast, they get half of the nutrients they need for the day,” while about 40 percent of essential nutrients are already in the children’s normal diet, Mr. Wieringa said.

For eight months, the 2,000 school children have now eaten the rice on every school day. This month, it was time to visit the 16 schools participating in the pilot project—and four schools, a control group, which are not—to see whether the nutrients have had an impact.

Blood, urine and stool samples were taken during the visit to compare the lack of minerals and vitamins recorded among the children in November with levels during the mid-term survey in March and the end result in June. A team of psychology students from Phnom Penh’s University of Health Sciences also conducted simple cognitive tests with about 120 students per day to determine whether their learning capabilities improved as a result of the vitamin fortification.

“The tests are on international standard, they are used all over the world, and some of the block designs were also used in Vietnam,” Mr. Wieringa said as he observed a small girl who was struggling to assemble blocks on a table as they were shown to her in a picture—part of the cognitive tests.

The surveys’ final results won’t be known until November, but since the fortified rice is now providing all nutrients the school children need for proper development, the hopes are high.

“We will find an impact on the nutritional state of the children. But I hope that we are able to show more; that we improve the functional outcome as well, like the ability to learn, an impact on their growth…and I hope to show an effect on their general health, like that they don’t get diarrhea anymore and therefore go to school more frequently,” Mr. Wieringa said.

Currently, the WFP annually spends about $23 to feed one child one meal per day in a Cambodian school. For an extra $0.50 per year, the rice that’s already part of the meals could be fortified with those crucial vitamins.

“Based on the findings of this study, WFP plans to scale up the use of fortified rice in the [school meals program] and other food-based social safety net programs in Cambodia,” she said.

This will directly benefit about 400,000 children in more than 1,300 schools across the country.