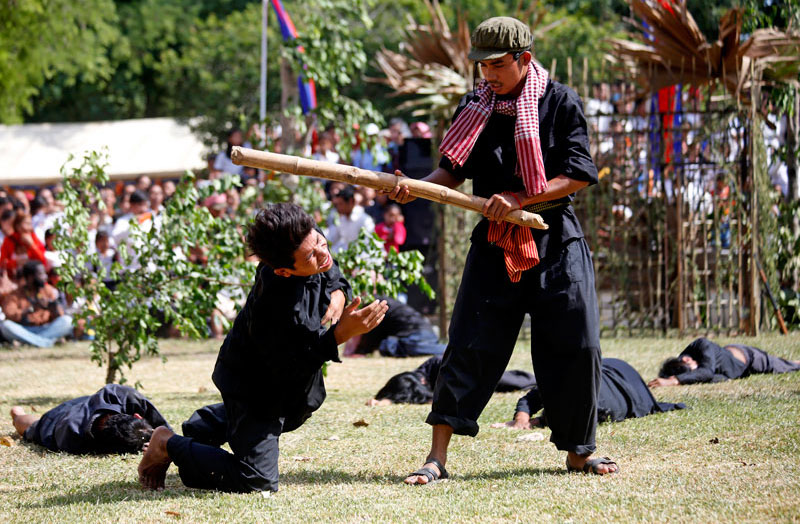 The Eerie and Absurd Combine in Day of Anger

There may be few more poignant takes on catharsis-by-theater than the manic play performed Wednesday—and every year on Cambodia’s annual Day of Anger—amid the mass graves of a Khmer Rouge killing field on the outskirts of Phnom Penh.

In a brisk 30 minutes, a few dozen grim-faced actors gave the crowd of monks and mourners, students and statesmen gathered at the Choeung Ek Genocide Center a visceral crash course on the bloody rise and fall of the Pol Pot regime, which wiped out a quarter of the country’s population.

Replayed in the shadow of the 9,000 skulls exhumed from the site was the Khmer Rouge victory lap through Phnom Penh on April 17, 1975, their overthrow by Vietnamese-backed defectors in 1979, and the brutal work camps and executions that have come to define the regime in between.

Garbed in the trademark black shirts and pants and red checkered kramas of the Khmer Rouge, wielding plastic rifles and toy knives, cadre slit throats and bashed heads with gusto. They fired off imaginary rounds to the tinny beats of a live drum.

Victims cowered, wailed and died with the histrionics of a soap opera. Fighters for the Salvation Front, which finally helped topple the regime, struck heroic kung-fu poses, dispatched armed adversaries with their bare hands and made synchronized leaps through the air.

Through it all, dramatic orchestral tunes blasted over raspy speakers while an overworked smoke machine poured a steady white cloud across the field. At times brutal and comic, drawing gasps and laughs from the audience in turn, the yearly show lands somewhere between eerie and absurd.

“It is to show that during Pol Pot, Khmer killed Khmer and killed the nation,” Nen Phearith, an acting student who played one of the high-ranking Khmer Rouge soldiers, said afterward.

“We want to show and remind the people; they have to remember what the Pol Pot people did,” he said. “We have to remember this history forever…so that in other places it never happens again.”

Since the 1980s, thespians like Mr. Phearith have been acting out that history to remind the country of what it went through and maybe help those who survived to exorcise their demons.

“I feel very scared when I see it,” said Chhorn Sok, who survived the regime on a work farm in Pursat province. “It is like I am in a storm, and the storm is trying to kill me. It hurts me because I cannot forget.”

Today, Mr. Sok helps care for the Choeung Ek killing fields, where the Khmer Rouge brought thousands of prisoners to execute and bury in more than 100 mass graves, now one of the most popular—and morbid—tourist attractions in the country. The skulls and bones exhumed from those graves lie stacked up behind the glass walls of a three-story stupa at the center of the site.

Mr. Sok lost the lower part of his right arm to one of the many rockets the Khmer Rouge fired into Phnom Penh before taking the city 40 years ago, and hides the stump in the long, loose sleeve of a drab jacket. But for all the dark memories the annual Day of Anger brings back, he said they were memories worth keeping.

“It is a special day every year because we have to remind ourselves of the people who died…. And the people who survived, we cannot forget them,” Mr. Sok said.

“Today is important,” said Sim Son, who lived through the regime on a work farm in Battambang province and comes to the event every year.

“I have to come, because six of my relatives died here. Four of them were soldiers…for Lon Nol. My husband was a teacher,” she said. “I miss my children, so I need to come here every year. I feel better because I can bless them and help them rest.”

Watching the actors, she said, “I wanted to cry because it’s very similar. When I was in Battambang, the Pol Pot people would grab the young children and kill them.”

But for all the catharsis, the day —organized by the Phnom Penh municipal government—is also a yearly display of unabashed political theater for the benefit of the long-ruling CPP.

The party’s top leaders, including Prime Minister Hun Sen—now 30 years in power—were among the Khmer Rouge defectors who fled to Vietnam and returned to help overthrow the regime with the force of the Vietnamese Army behind them. The CPP has never stopped reminding the country of it, and the MCs at Wednesday’s event drove the message home.

The party’s “Three Samdechs”—Mr. Hun Sen, National Assembly President Heng Samrin, and Senate President Chea Sim—literally loomed over the event as their portraits were marched out on top of three polls at the end of the play to a rousing song.

But while the CPP views the overthrow of the Khmer Rouge as a liberation and the defining moment of the country’s rebirth, many Cambodians see it as the start of a 10-year occupation by neighboring Vietnam, which installed the leaders who still rule the country today.

The political opposition would rather the government de-politicize the event.

It was also a little too much for Ms. Son.

“Those people get food from Hun Sen, so they have to talk about him,” she said. “They should respect the people who died at that time.”