Forty-four years ago – on April 17, 1975 – a nightmare started for Cambodia and its entire population. On that day, after a brief battle on the outskirts of the city, Khmer Rouge fighters marched into the capital Phnom Penh and took control of the country.

The radical communist movement led by Pol Pol controlled the Southeast Asian nation until 1979, but in that brief period, a quarter of the population perished, with estimates of the dead ranging between 1.7 million and 3 million.

Three foreign photographers ventured onto the streets of Phnom Penh on April 17 and captured images of the victorious Khmer Rouge entering the besieged city. They took enormous risks to photograph the mysterious communist guerrillas who had a well-deserved reputation for brutality and taking no prisoners. 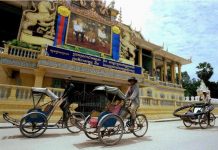 ­­There Is No Place for ‘Chbab Srey’ in Cambodian Schools