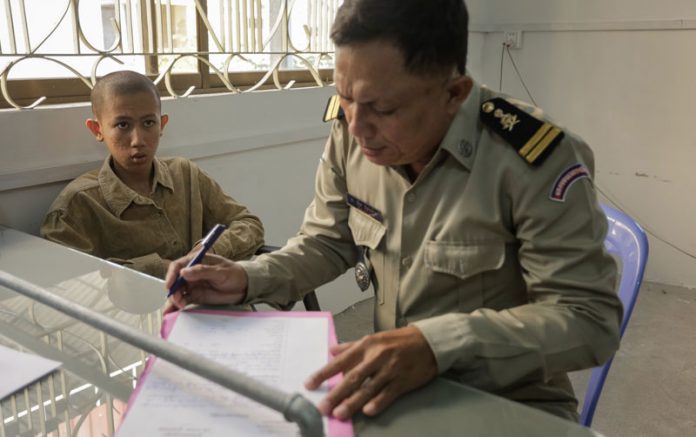 A teenage monk was arrested Monday after using a kitchen knife to stab and kill an older monk at Phnom Penh’s Samakki Raingsey pagoda, police and pagoda residents said.

The pagoda in Meanchey district has become a haven for marginalized groups seeking shelter in Phnom Penh in recent years, and many politically active, ethnic Khmer Krom monks reside there, including the victim of Monday’s stabbing.

Choem Sitha, deputy chief of police in Meanchey district, said Chan Sopheak, an 18-year-old Khmer Krom monk who also goes by the name Ly Toeng, got into an argument with the pagoda’s second deputy chief monk, Thach Khan, 37, at about 8 a.m. Monday.

“We have only the statement from the monk that Thach Khan punched him first in the right jaw,” said Mr. Sitha.

“There was a confrontation and he [Mr. Sopheak] stabbed him. He said he did not know he had stabbed him; he just held the knife in his hand,” he added.

Mr. Sitha said that Thach Khan later died of his injuries, which included a stab wound near his collarbone, at the Khmer-Soviet Friendship Hospital.

Mr. Sopheak fled Samakki Raingsey pagoda after the fight and police officers arrested him at a nearby house where he was hiding.

“Our police officers and officials from the Ministry of Religion went there and defrocked him,” Mr. Sitha said, adding that police were compiling a report on the incident and would bring Mr. Sopheak before the Phnom Penh Municipal Court today to face charges.

Tib Pouly, 25, a visitor to the pagoda who witnessed the fight, disputed the suspect’s claims, saying that Mr. Sopheak threw the first punch and then took out a knife.

“The young monk punched him and Thach Khan tried to take cover,” he said. “The young monk took a knife from his…bag and slashed him, hitting his hand and his neck, and blood gushed everywhere.”

“[Thach Khan] tried to flee, but he fell to the ground at once,” he added.

The pagoda’s chief monk, Seang Sovannara, said Thach Khan had been attempting to pull Mr. Sopheak into his room to discuss the young monk’s recent disobedience when the fight broke out.

“Before, [Mr. Sopheak] was not like this—he was a gentle and quiet monk—but recently, we have noticed that he has been aggressive,” he said.

Seang Sovannara said that on Sunday night, Mr. Sopheak tore down a notice posted in Samakki Raingsey warning monks about a civilian who had been collecting alms in the pagoda’s name. This was Thach Khan’s immediate reason for calling the young monk in for a scolding, he said.

First deputy chief monk Thach Ha Sam Ang said he believed the murder was premeditated, not carried out in the heat of a confrontation.

“It was a planned murder, as he already had the knife…and therefore intended to kill him,” he said, adding that Mr. Sopheak had seemed “gentle” and that the murder came as a shock to all of the Samakki Raingsey monks.

“It could be that someone outside the pagoda incited him to make trouble in the pagoda, because if the pagoda has an incident, [the authorities] can shut down the pagoda.”

Two ethnic Khmer Krom monks from Samakki Raingsey were arrested in November as they attempted to transport flags to protesting villagers from Preah Vihear province staying at the pagoda.

The Court of Appeal on Friday denied bail to the monks, who are charged with participating in a criminal organization.

Correction: A previous version of this story mistakenly identified Tib Pouly as a monk.