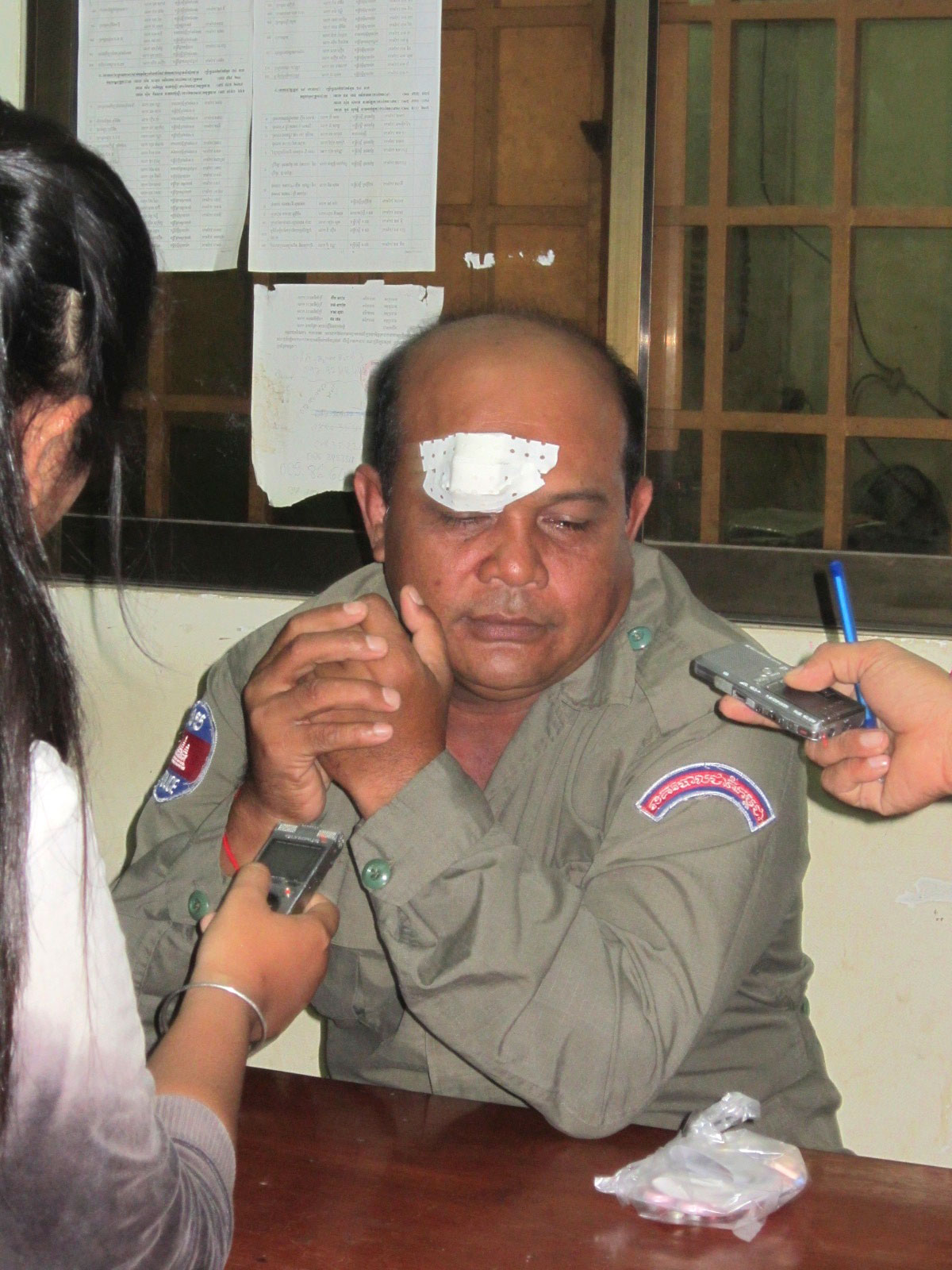 Taunting Between CNRP, CPP Gets Violent as Election Nears

Taunting between CPP and Cambodia National Rescue Party (CNRP) campaigners turned violent Wednesday as supporters from both parties fought with each other in Russei Keo district, resulting in a police officer receiving an injury to the head from a flying rock.

The skirmish occurred a day after Hem Vutha, a 21-year-old CNRP supporter, spent Tuesday night in the hospital after he was struck in the back of the head with a brick in a melee in Meanchey district.

Deputy commune police chief Kham Hun, 53, was left with a wound to his forehead after an argument over party loyalties between two young women turned violent in Russei Keo district.

Sun Harany, 23, one of the young women whose loyalties lie with the CPP, said that a convoy of CNRP campaigners had been passing through Chraing Cham­reh II commune, which is heavily decorated with CPP signage and has a large Cham population, when the opposition supporters incited the crowd by using the word “yuon,” a term which can be derogatorily used to describe an ethnic Vietnamese person.

Ms. Harany explained that as she and the unknown CNRP supporter argued on the road in front of the commune police station, crowds gathered and projectiles began to fly, one of which struck Mr. Hun as he attempted to intervene.

“I was trying to convince the girls to stop the argument and move on but they would not listen,” Mr. Hun said from the commune police station as he nursed a minor injury Wednesday evening.

“There were bottles of water being thrown and then I was hit by a rock—I don’t know where it came from.”

Immediately after the incident, the CNRP supporters left the scene. CNRP spokesman Yim So­vann said he was unaware of the incident but that his party followers were well educated on the dangers of using “yuon” as a pejorative.

“Every single day, before our rallies begin, we instruct our people not to use this word because we know the repercussions,” he said.

In Tuesday’s clash, Mr. Vutha, who now has four stitches in his head, claims to have been part of a group of CNRP activists who rushed to Street 2 in Meanchey district after receiving news that CPP youths were beating opposition supporters.

“We arrived on our motorbikes, maybe 50 of us, and saw four or five CPP supporters fighting with three CNRP supporters,” Mr. Vutha said.

“We came to help but there was military police who stopped us from going toward the fight. They made a line and pushed us away, but they didn’t stop the fight.”

“The three CNRP supporters managed to run to the pagoda for safety but just as I turned on my motorbike to leave, the brick hit the back of my head and knocked me to the ground. The military police just watched.”

Surn Phanit, a Chak Angre Loeu commune security guard, who was on duty at the CPP office and witnessed the clash, said CNRP supporters had started the fight on Tuesday.

“They drove to us and started yelling ‘yuon,’” he said, “then a fight broke out and suddenly 400 or 500 more CNRP supporters arrived on motorbikes.”

“We only have a small commune police team so they [military police] had to stop the CNRP group from getting to the small group or there could have been more injuries or deaths.”