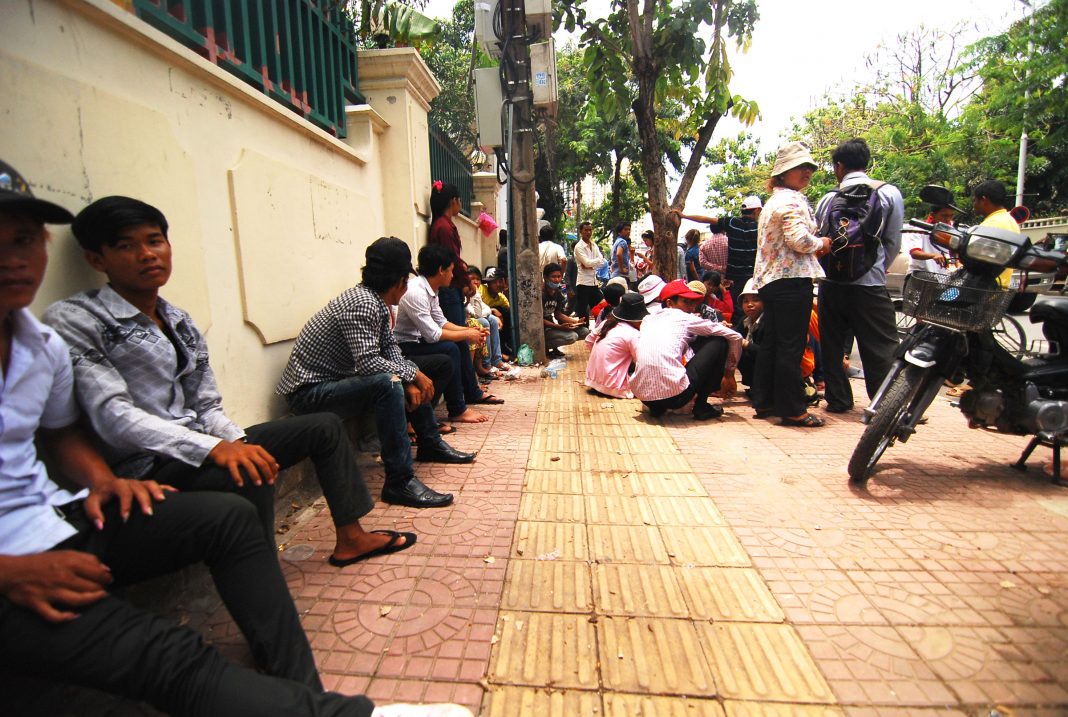 Thousands of Cambodians cross the border via illegal checkpoints into Thailand every year. Some end up working in slave-like conditions on illegal fishing trawlers. Others work in factories while getting paid under the table.

It is often a last resort fraught with danger and uncertainty and yet for many migrants, it is a more realistic option than traveling to Phnom Penh to navigate the long-winded and expensive process of acquiring a passport.

Although the Ministry of Interior said earlier this month that a new passport office would open in Battambang in order to make it easier for people living in western Cambodia to obtain a passport, for the moment the country’s only passport office is situated in Phnom Penh’s Chamkar Mon district.

“We do not want to risk our lives crossing the border illegally…but the price for paying for a passport should be reduced to a minimum,” said Mean Sam Aun, a villager from Banteay Mean­chey province’s Preah Netr Preah district.

He said that many villagers in his area had chosen to go to work in Thailand after being evicted from their land by a private agro-industry business and that going there legally was simply too expensive.

“We don’t have enough money to get passports for legal migrant work since it costs a lot,” Mr. Sam Aun said, adding that some villagers have reluctantly agreed to spend up to $250 for a passport.

Many who made it to the passport office over the past two weeks described a chaotic application process that takes most of the day to figure out and said that it usually takes weeks longer than the official period of 20 working days to receive their passports.

Then you must submit the application by fingerprinting it, proceed to have a photograph taken for a fee of $4 and finally be interviewed and asked to pay $124, after which you will be given a receipt with a date to pick up your passport.

For a fee, brokers will assist with filling in the application form and sending the portfolio of documents through the chain of necessary officials. Typically, an applicant may expect to pay a broker $135 to receive the passport in six weeks; $185 in three weeks; and $285 for an expedited one-week wait.

“We are poor and yet it’s more expensive than it is in neighboring countries which are richer than us,” said 23-year-old student Yang Sokpreoung, who on Wednesday paid a broker $185 because he needed to travel to Malaysia as part of his undergraduate studies. “I don’t know all the detailed information and I am in a hurry to get it done,” he said.

For migrant workers who apply through employment agencies that promise to find them jobs abroad, getting a passport is even more expensive.

“I paid $500 so they could find me work in an electronics factory in Bangkok—it’s very expensive and I’m nervous they won’t make it for me,” said 26-year-old Yong Yen, adding that he hoped to get the job soon to pay back his parents, who are farmers and had loaned him the money from savings.

In December, Prime Minister Hun Sen lambasted the Cambodian News Channel for interviewing a “stupid” NGO representative who argued that the large number of illegal migrant workers in Thailand was due to the prohibitive cost of Cambodian passports.

But while the government says just more than 100,000 Cambo­dians legally go to work in Thailand, labor experts say an estimated 600,000 illegal mi­grants are crossing into Thailand from Cambodia every year.

Vuth Phally, director of the Interior Ministry’s department of statistics and passports, said many more Cambodians are applying for passports than ever before. Between 800 and 900 people come into the passport office in Phnom Penh every day compared to an average of about 500 per day last year, he said.

“Migrant workers are one of the key contributions for the increase in number of passport applications, while the improvement of people’s economic situation means they are using our service to visit Thailand and Vietnam,” Mr. Phally said, adding that currently, more than 1.5 million Cambodians hold passports.

Mr. Phally also said that the official price for a passport ($124) and the official waiting time of 20 working days is “fair enough” in comparison with other countries in the region.

Still, Hoy Pich Sovann, migrant workers’ rights program officer at the Community Legal Education Center, a labor rights organization, said there was no doubt that the expensive, time-consuming application process was a significant factor in pushing many Cambodians into illegal migrant work.

“It’s too expensive. It’s also a long distance to travel to Phnom Penh, and many people may have to stay overnight, while the lack of information when they get to the office means they don’t know what to do because they might not have a good education,” he said.

Cambodia record first win after 5-0 thrashing of Timor-Leste in SEA...

Cultivating solidarity between Vietnam and Cambodia