Turkey is in talks with the Cambodian government over the possibility of taking control of the Zaman-operated schools in Phnom Penh, which it alleges have links to a “terrorist organization” behind last year’s attempted coup, the Turkish ambassador said on Friday.

Following the thwarted overthrow on July 15—which resulted in the deaths of more than 250 people and thousands of arrests—the Turkish government started a global crackdown on institutions it claimed had links to Fethullah Gulen, a controversial cleric whose Hizmet movement is accused of masterminding the uprising.

Phnom Penh’s Zaman International School and its affiliated university immediately came under fire, with Ambassador Ilhan Kemal Tug calling upon the Cambodian government to shut down the institutions, in which more than 900 students are enrolled.

During a media conference at the Turkish Embassy in Phnom Penh to mark the attempted coup’s anniversary, Mr. Tug reiterated his desire to have the Zaman schools shuttered, but conceded he was open to alternative options.

“Our priority aim is to shut down the schools here,” he said. “But…we are also aware of the sensitivity of this matter in Cambodia, especially given the number of schools present in the country, so we are trying to find some alternative options, for example, taking over the management of the schools.”

Last year, Zaman denied the schools had any formal connection to Mr. Gulen, threatened legal action against the ambassador and launched a social media campaign to reassure parents that its institutions would continue operating as usual.

In a statement on Friday, Zaman said the ambassador’s latest comments were defamatory and maintained the school was not under threat.

“We regret that the Ambassador raised this case again while never presenting any evidence even being asked for many times already. We take this as a baseless accusation and as the last accusation; or else, we will consider it as a defamation case,” the statement said.

“We would like to reassure the students, parents, staffs and the public that the school will remain as an institution to provide education to students as always and look forward to further expansion to meet the current demand,” it added.

Ros Salin, a spokesman for the Education Ministry, did not respond to a request for comment.

In January, it was announced that Chea Sophakanny, daughter of Land Management Minister Chea So­phara, had been made chairwoman of Zaman-operated schools and its largest shareholder, while her husband, Eang Sophalleth, a personal adviser to Prime Minister Hun Sen, was made its honorary chairman.

Mr. Tug said he was “satisfied” with the “interest and cooperation” of the Cambodian government in talks about the Zaman schools.

He then warned that the Hizmet movement, whose supporters claim to uphold a modern and pacifist brand of Islam, could even pose a threat to Cambodia.

“When you ask me the question of ‘Is there any risk in Cambodia?’ Yes, of course there’s a risk,” he said. “We thought there wasn’t going to be any risk. We just turned a blind eye. But look at what they are capable of.” 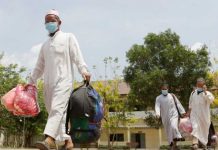 Damming the Mekong to environmental hell