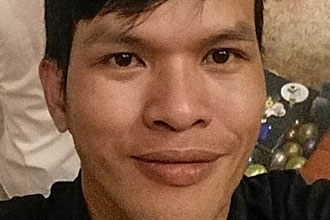 A 25-year-old Vietnamese man was arrested in Ho Chi Minh City on Wednesday evening in relation to graphic videos allegedly showing him repeatedly torturing a young Cambodian boy, according to an investigator involved in the manhunt.

James McCabe, head of the Child Protection Unit, a policing charity involved in the investigation, said Nguyen Thanh Dung was arrested shortly before 9 p.m., a day and a half after the videos were leaked online.

“I can confirm that Task Force Uniform members made an arrest in Saigon of a Vietnamese national, the name of Nguyen Thanh Dung,” Mr. McCabe said, adding that the force involved Cambodian and Vietnamese police units.

He said two Cambodian men who had been arrested by police on Tuesday were released without charge, and the suspect’s Dutch boyfriend, 53-year-old Stefan Struik, was cooperating with authorities investigating the case.

Police said Mr. Struik, who holds Cambodian citizenship and owns cacao plantations and a palm sugar warehouse in the country, would be sent to court today for allegedly failing to report the abuse.

Mr. Struik was taken into police custody along with the Cambodian men, who were employed on his plantation, in Kompong Cham province. He was to be sent to the provincial court in Mondolkiri, where the abuse occurred, police said.

Under police questioning, Mr. Struik “said he didn’t know anything, he didn’t do anything wrong,” said deputy Mondolkiri police chief So Sovann. “He said [he and Mr. Nguyen] are not lovers, but he said they love each other so much.”

A YouTube video shows at least two separate instances of torture involving the man and boy, apparently shot with a smartphone in a static position.

The man in the video at one point blindfolds the boy and ties his hands behind his back, repeatedly using a taser on his head, feet, backside and genitals, making the boy scream and cry. At another point, he slaps him around and shoves his fingers and another object down his throat, making him choke.

Mr. Sambath said Mr. Struik and the two Cambodian men told police they had only become aware of the abuse, which took place on Mr. Struik’s cacao plantation in Mondolkiri, after the videos appeared on Facebook on Tuesday.

One of the Cambodian men told police that he believed the videos were leaked online by one of Mr. Nguyen’s cousins, who was jealous that he had found a wealthy partner. However, the Vietnamese woman who appears to have leaked the video said in an accompanying message that she was exposing the torture in the hope that the perpetrators would be caught.

The boy in the video had been sent to the state referral hospital in Sen Monorom City for an examination and was in stable condition, Mr. Sovann added. Mr. McCabe said the boy and his family “will be supported.”

Previous article
CNRP Says Adhoc Prisoners Set to Be Freed
Next article
With Rainsy Out, Sokha Takes Helm at Assembly