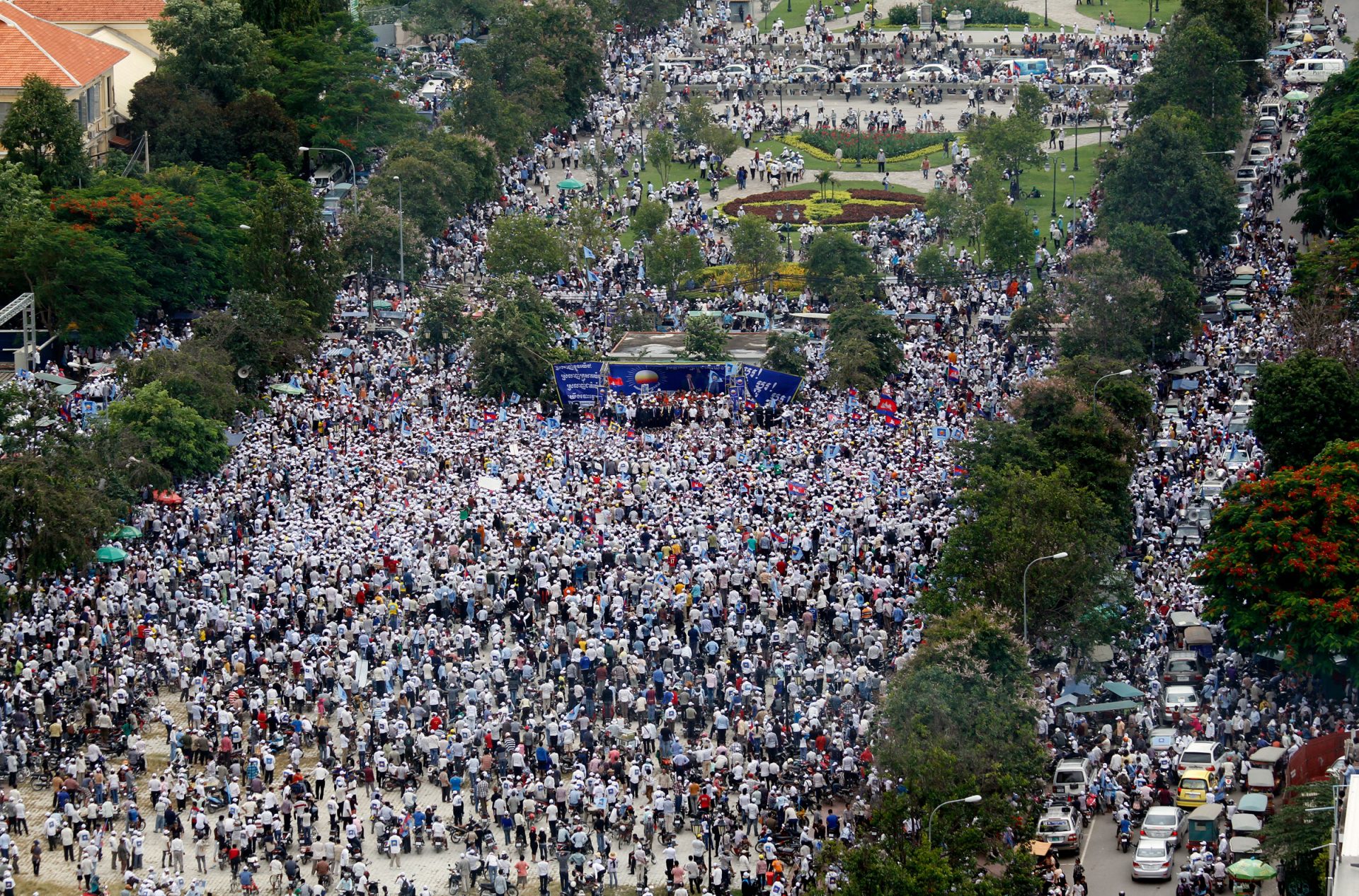 Cambodia National Rescue Party (CNRP) president Sam Rainsy on Friday vowed to write a new page of Cambodian history in next week’s election in his first speech after returning from four years of self-imposed exile.

An estimated 100,000 people turned out to greet Mr. Rainsy, gathering on boulevards, in parks and traveling in the huge convoy that accompanied his slow drive from Phnom Penh International Airport to Freedom Park.

The throngs far exceeded his own party’s expectations of a turnout of 40,000 people.

Taking the stage at Freedom Park after a five-hour journey to cover the dozen or so kilometers from the airport along supporter-clogged Russian Boulevard, a seemingly overwhelmed Mr. Rainsy appeared to quietly come to terms with the magnitude of the crowd.

Before speaking to the assembled crowd of thousands, Mr. Rain­sy and CNRP vice president Kem Sokha—both decked out in jasmine garlands—knelt before and were blessed by a group of monks.

After a brief introduction by Mr. Sokha, Mr. Rainsy told the crowd that his “dream came true.”

“I am so excited, so emotional. I cannot describe my feelings right now. I’m so happy to return to the motherland. Today is a day that I will remember for the rest of my life.”

Over the course of his 30-minute speech, in which he assured voters that his party is unbreakable and unwavering in its mission to deliver better standards of living for all Cambodians, he managed to gather pace and whip the crowd into a frenzied mass that saw young and old clamoring to capture a piece of the moment for posterity.

“I would like to thank the King for pardoning me and allowing me to return home,” he said. “But in fact, I’m not even guilty. The King helped wash the colors I had been painted with,” he continued in reference to the Royal Pardon which cleared the 11-year prison sentence handed to him in 2009 on charges, which he claims were politically motivated, of spreading disinformation and uprooting a border post.

“Change” has been a central tenet of the CNRP election campaign and it was, in many ways, the theme around which Mr. Rainsy’s speech was designed Friday.

According to Mr. Rainsy, that change is required at every level of society; in government, the courts, schools and health care centers, in terms of job availability, salaries and the recovery of land.

“We call on every Khmer and every political party to unite with us to do good things with us,” he said.

The huge number of people who turned out to see him was not lost on Mr. Rainsy, who made a very thinly veiled attack on the CPP and the methods it uses to bolster its rallies.

“All of you who come to greet me, were you forced or threatened to come? Did anyone give you money to come? Some people force and threaten others to come, and they still can’t get that many people. I’ve never traveled from Pochentong to Wat Phnom for five hours,” he said.

For those who waited many hours to see him, the wait—during which bottles of water and cotton buds infused with Tiger Balm were handed out to supporters to stave off fainting—was worth it.

“Mr. Sam Rainsy has returned to rebuild our country.”

Fellow garment worker Kheng Srey Thuon, also from Kandal, said that at the age of 22, this national election is the first in which she can vote—and that vote is being cast for the man she thinks can make genuine im­provements to her industry.

“He understands the hardships that people are going through,” she said. “He has promised to help people from corruption and oppression…. What I remember most about him is that he told us he would help the workers.”

Chan Savoeun, a 55-year-old from Prey Veng province, didn’t sleep on Thursday night and left her home with four other trucks of people at 5 a.m. to ensure that she wouldn’t miss the event.

“I want change, because life is so difficult now,” she said.

Someone who said he understands that plight is popular Beehive radio host Mam Sonando, who was carried up onto the stage as the crowd closed in around him. The excitement when he stood and gave a powerful address to those waiting for Mr. Rainsy was palpable.

“We have to fight for our children’s future,” he said. “Do you agree? Change? Vote for what number? We change the absolute power regime. We protect our rights. We stop worrying because nobody will beat us up anymore. Mam Sonando will protect you.”

He reminded the gathering that death would come to all eventually and that he was willing to sacrifice himself for the good of the country. He urged people to ask themselves, “What have I done to serve the nation? That’s what we need to consider.”

Those notions were reflected in Mr. Rainsy’s speech, during which he said he too, is willing to sacrifice himself for the sake of the nation.

In the midst of his speech, all eyes, cameras and phones were on Mr. Rainsy. When his speech ended, the crowd pushed forward, hands outstretched for contact. A few near the front were lucky, before Mr. Rainsy was shuffled away by his entourage.

It was the culmination of an intense day for Mr. Rainsy, who flew first from France, where he was in self-imposed exile since 2009, to Bangkok. He was joined on the final leg of his flight by Mr. Sokha.

After he emerged from the VIP terminal at Phnom Penh International Airport, he knelt down and touched his head to the ground before climbing into the SUV that would take him into the city.

“I am very happy to meet all of our compatriots here. We will walk together and I am here with all of you to help rescue our nation,” he said, standing alongside Mr. Sokha.

Standing on a platform atop the SUV, Mr. Rainsy and Mr. Sokha, raising their hands in unison, began moving through a crowd that far surpassed the 20,000 people expected at the airport for the opposition leader’s return.

“I hope that Sam Rainsy will help our nation and people,” said 56-year-old Touch Noeun, who accompanied the convoy as it snaked along Russian Boulevard.

“I want to change the government leaders, because they are corrupt.”

The anti-Vietnamese sentiment was also clear, with others in the welcoming crowd saying that they wanted Mr. Rainsy to tackle “illegal immigration” and land grabs.

In his own speech, Mr. Rainsy alluded to Vietnam by saying that “while we’re losing our people [to migrant work], foreigners are flowing into our country. So many of them.”

Over the next seven days, Mr. Rainsy is scheduled to take part in a whirlwind campaign tour, in which he will speak in 15 of Cambodia’s 24 provinces.

The CPP organized its own rally in Phnom Penh on Friday, which drew thousands of supporters as it snaked through the city.

For the most part, both rallies managed to avoid each other—until groups of youths from both parties clashed for about 20 minutes near Wat Phnom in Daun Penh district.

Water bottles, rocks and pieces of wood were thrown in the localized dispute, which was sparked when CNRP youths allegedly accused CPP members of taking over the area.

“I know that about four or five CPP supporters were sent to the hospital,” district governor Sok Sambath said.

A district councilor, Pich Socheata, said she was hit in the face by a flying water bottle. She also said she had video evidence of CNRP supporters gathering stones and flinging them toward the CPP members.

Sin Sreypov, a 34-year-old CNRP supporter, said some of her colleagues used a racial epithet to imply that the CPP supporters were of Vietnamese origin, causing them to respond with the water bottle throwing.

Council of Ministers spokesman Phay Siphan said the show of support on Friday was merely a flexing of muscles and made no dent in the CPP’s resolve to retain its grip on the National Assembly.

“We understand that seats are affected not by support of Sam Rainsy, but the way of allocating seats through the number of votes,” he said.

“This is flexing muscle; it’s ceremonial, not a strategy. They are trying to earn back confidence from supporters…. But this number is not exactly the number of people voting.”