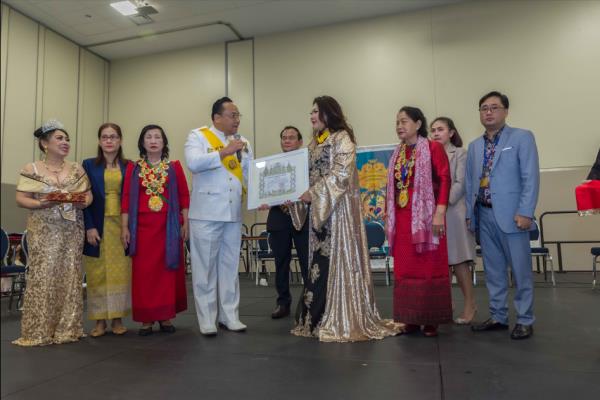 Sultana from the Philippines, the First International Woman to Receive the Monisarapown Award from the Royal Government of Cambodia

We Care for Humanity Founder and G.O.D. Chairman, Maria Amor received an award given by the Prime Minister of Cambodia, Samdach Hun Sen for her unwavering support to Save Nature Cambodia for planting almost a million trees in the Kingdom.

H.E. Oknah Sam Dararath, PhD , founder of Save Nature Cambodia and Adviser to Samdach Prime Minister felicitated the Monisarapown Award from the Royal Government of Cambodia to HRH Maria Amor onthe occasion of the8th Global Order of Dignitaries and Philanthropists (G.O.D.) AwardsCeremony and Dinner Gala at the Anaheim Convention Center, one of California’s landmark last September 21, 2019. Dr. Dararath was enjoined on the stage by other Cambodian delegates and honorees of the said function: H.E. Iv Sry, Advisor to the Ministry of Interior who received the Woman of Honor of Asia from G.O.D.; Mrs. Kimly Lim, President of Family Agricultural Development Community who also G.O.D. recipient as Humanitarian Icon of Cambodia; and Dr. Siphal Pheng, a businessman.