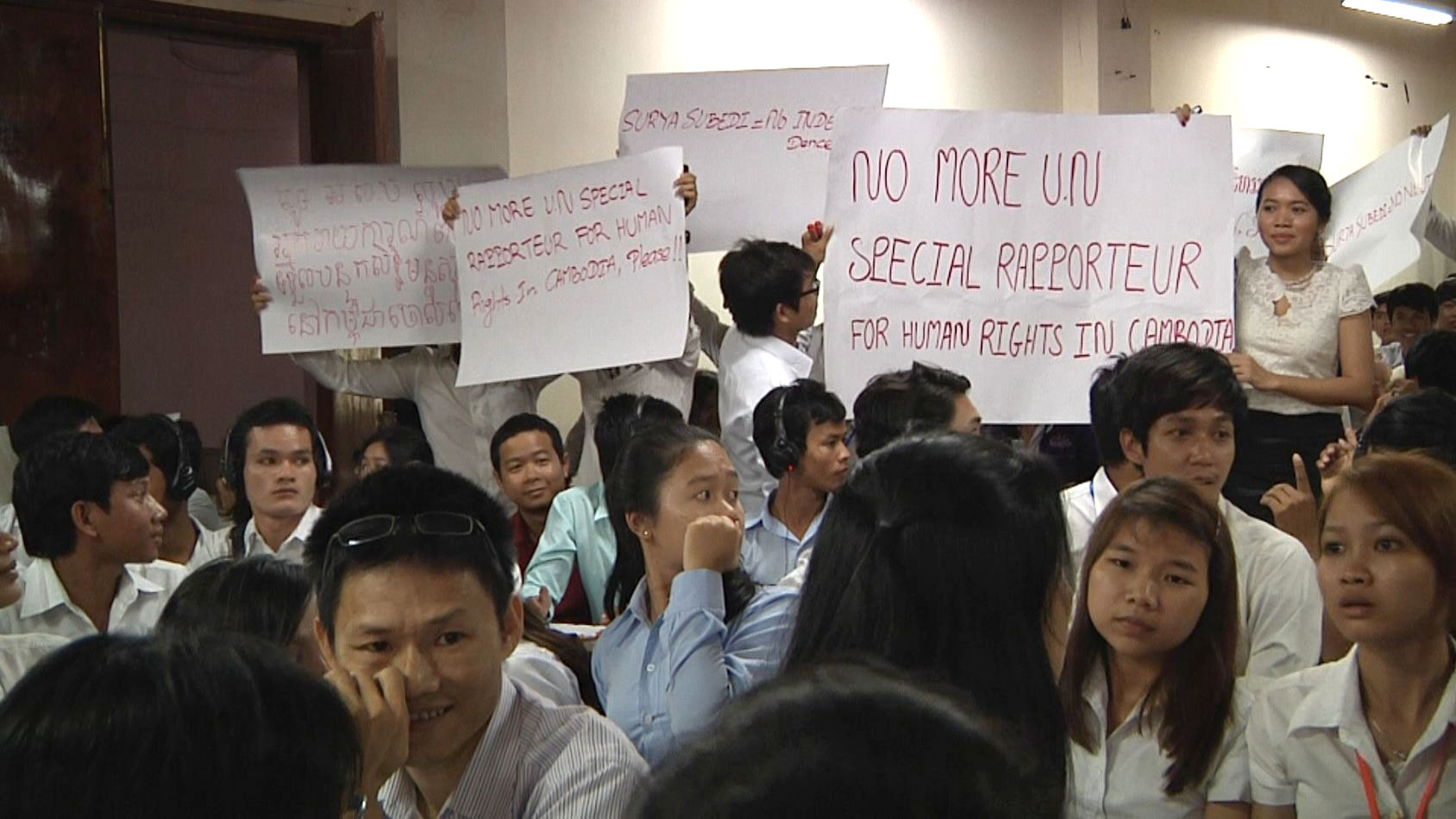 Despite the apparent spontaneity of a protest against U.N. human rights envoy Surya Subedi at a university in Phnom Penh on Tuesday night, it emerged Wednesday that one of the apparent leaders of the demonstration is associated with a youth organization aligned with the ruling CPP.

The rare instance of activism—in which the students angrily questioned Mr. Subedi’s independence and unveiled banners demanding that he end his mandate to monitor human rights in the country—appears to demonstrate the long reach, and appeal, of the ruling party, which now dominates most areas of Cambodian society.

After Mr. Subedi ended his lecture on international investment law to hundreds of students at the Cambodia Mekong University (CMU) on Tuesday night, a question and answer session was hijacked by students wanting to vent their anger about the special rapporteur and his reports on hu­man rights in Cambodia.

The first student to take the microphone was 23-year-old Chea Chheng, a student of public administration at the Royal University of Law and Economics (RULE), who said he rejected the reports released by Mr. Subedi and stated firmly that “Cambodia has no human rights problems.”

After he finished, five other students made similarly critical statements about Mr. Subedi and his reports, which have highlighted deficiencies in Cambodia’s judiciary, land policy and elections.

Mr. Chheng could not be contacted for comment. However, fellow students and a lecturer at RULE said Wednesday that Mr. Chheng is a well-known personality among the Union of Youth Federations of Cambodia (UYFC)—a youth organization aligned with the ruling CPP and presided over by Hun Many, the son of Prime Minister Hun Sen. Mr. Many is also a CPP election candidate in Kompong Speu province for the upcoming national election in July.

“Don’t you know he’s a famous guy. He’s one of the leaders of UYFC,” said one CMU student, who would only give her first name, Chenda, when asked about the protest and Mr. Chheng.

Mr. Chheng’s Facebook page shows a picture of him dressed in a military uniform issued to student volunteers as he receives a gift from Prime Minister Hun Sen at an event to promote the prime minister’s nationwide land-titling program. Other photos show Mr. Chheng posing on three different occasions alongside Mr. Many, including at events involving the Red Cross and the UYFC.

Nuon Pharoth, a permanent member of the UYFC, said that while he was not authorized to speak on behalf of the organization, the group was not behind the anti-Subedi protest at the university.

“We don’t know what was going on there,” he said.

Mr. Pharoth insisted that Mr. Chheng was not a full member of the UYFC.

“We know him, he was the volunteer on some of our projects, but he’s not a member,” he said. “There are more than 10,000 youths who have a picture with Hun Many,” he added.

“It is nothing surprising because it is a democratic society so that students can express what they want,” he said.

You Thearith, 25, a third year student in RULE’s Bachelor of Law in English program, who was present at the lecture Tuesday, also identified Mr. Chheng as a member of the UYFC at his university.

Mr. Thearith said he was more than a little surprised by the dem­onstration. Although much of the room applauded the protesters, Mr. Thearith thought that many—aside from the 20 to 50 people directly involved in the protest—did not agree with their criticism of Mr. Subedi.

“Normally, the youth in Cambodia are afraid to run protests,” Mr. Thearith said. “What I think is that maybe they are supported by someone. It was very organized.”

“There’s been a lot of effort to organize mass youth organizations across the country,” he said.

“It goes back to the communist days. They always try to tie the youth to the party so they toe the party line,” Mr. Mong Hay said.